Ground Zero: Mood at Amazon office as Diwali sales kick off at midnight

Moneycontrol gives readers a sneak peek inside the Amazon India 'war rooms' as it kicked off its biggest Diwali sale ever at midnight, this week.

It is 10 pm in Bangalore. The roads are mostly deserted in Yeshwanthpur, a sub area of the city known for its swanky glass high rise -- the 30 storey World Trade Centre.

It’s unusual to see cubicles in the glass building lit up so late in the night. When seen from a mile away, it provides the impression of a giant chandelier.

The building houses the India headquarters of of US-based e-commerce firm Amazon that is now expected to begin its third Great Indian Festival Sale in a couple of hours.

As I enter the building, I can see exceptional activity and humdrum. Some are back to office from home after finishing a quick dinners.

As I take the elevator, am transported to the 26th floor. All employees can be seen huddled in multiple conference rooms hooked onto their laptops.

For the four days of the sale from September 21-24, these conference rooms have been transformed into war rooms that are equipped to handle crisis situations on a live basis.

Each war room consists of executives who are specialists in their respective fields. 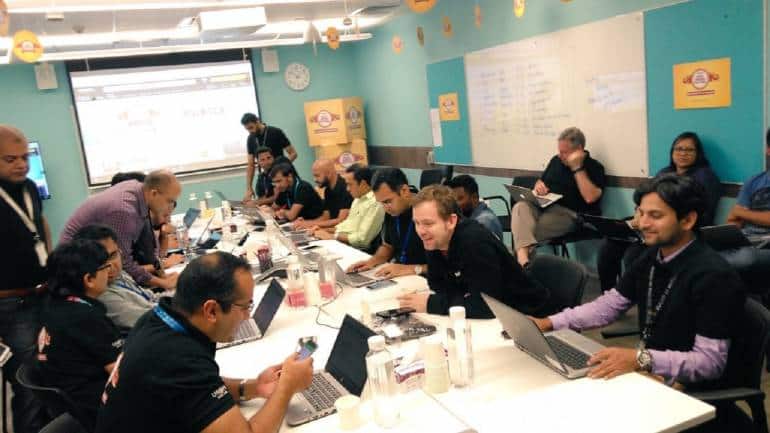 I enter one of these war rooms where there are about 30 people. Pizza boxes are strewn in one corner of the room. Some employees have not gone home in last 24 hours.

The job of the people in this war room is to ensure that if any seller query arises, they should resolve it in as less time, as possible.

"We are keeping an eye in this war room from the seller point of view. Suppose, in the middle of the sale, if a seller says he wants to put in more inventory, we can provide them insights," an executive tells me.

There are similar rooms with people who are handling areas such as category management.

For the unaware, Amazon India has divided all the listed 150 million products into broadly four categories of consumables, hardliners, fashion and consumer electronics.

War room concept has been there for quite some time. The need is to see that the customer issue that come out are solved instantly.

There's another floor with yet another war room.

As I enter another war room, I see all the key executives of Amazon India - which includes the leadership team and category heads of the company.

Most of them are clad in black t-shirts with the elephant logo of Great Indian Festival printed on the back. This is expected to be the toughest and biggest sale for all e-commerce firms as most such as Flipkart, Paytm and Amazon are amply funded.

Internet penetration has also increased in India, so has adoption of mobile payment methods.

"A lot is different this year in India. We have doubled up our capacity and are making sure that the SLA (service level management) is taken care of. For example if a customer calls, how much time does it take for the executive to respond. That needs capacity build up and planning," says Kishore Thota, director customer experience and marketing.

The company has also set up what they call an ‘availability team’.

"They are the group of people who know literally everything at Amazon. They are available ‘on call’ round the clock and have the ability and access to wake up anyone anytime," Thota says.

How possible is it for things to go wrong despite so much effort?

"We do as much preparation as possible. But there are enough smart people to take care of things if they wrong," Thota says.

Talking about the first festive sale that the e-commerce sector witnessed in India in 2015, pat comes his reply, "We have traveled a long distance from that fortunately." 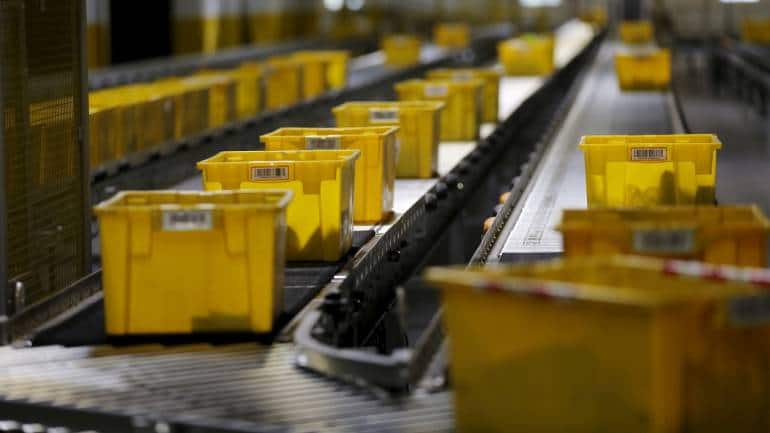 During the 2015 sale, many e-commerce firms saw crashing of websites and failure of payment gateways even as money got deducted from customer’s accounts.

Talking from an experience point for ecommerce executives in India, the 2015 sale was a nightmare.

The demand could not be predicted correctly in advance. It resulted with not just the websites crashing but even the logistics getting stranded for long.

A bunch of young employees grab Thota away as they need him for some clarity on a situation.

Free installation for TVs and ACs

As I walk, I notice that the decor of Amazon headquarters is minimalist -- blue walls and brown wooden doors.

I bump into Kaveesh Chawla, director, large appliances at Amazon India. He claims that television and large appliances is going to be one of the top categories, during the festive sale this year.

I manage to get him to a quiet corner with just two stools.

According to him, this has been Amazon's "blockbuster category" throughout 2017. The company has set up separate fulfillment centers exclusively for large appliances and has also started installation services for many of the products across 40 cities.

"Heavy and bulky products need to be handled differently. They are mostly scheduled deliveries. Secondly the installation component is also in place now," says Chawla, who has been working with Amazon since 2006, first in the US and now India.

According to Chawla, out of the 200 cities that Amazon delivers in India, the company now has its own managed supply in 40 cities.

In rest of the 160 cities, Amazon India works with brand networks.

Amazon this year has started a cross category exchange offer where in a mobile phone can be exchanged while buying a television.

Besides that, it is bullish on its no cost EMI option, where customers can "buy now and pay next year", under which the customers will get an option to start paying their EMIs, only three months later.

Soon we are joined in by the vice president of category management at Amazon India who is craving for a midnight coffee shot.

We sit in a tiny pantry amidst a coffee machine, water dispenser and a lots of paper cups.

"Sometimes many brands (the company works with) fall short of trained people (who install large products for customers)," he says explaining the reason Amazon India has started hiring people to install big appliances such as television or air conditioners in select cities for customers.

Even as we are talking, a manager comes running. He informs that

Amazon India head Amit Agarwal was on a video call with the team and asks if we would like to attend that.

He couldn't make it to Bangalore this year as he had to attend an important global meeting which was planned way before, am told.

In a nearly five minute motivational call, Agarwal mostly tries to boost up the spirit of the leadership team.

"This is a unique, one long celebration that we get to do with our sellers, customers and ecosystem partners. Not many opportunities like these happen where all of us are working towards a common goal which is how do you service the needs and aspirations that you see throughout the country," Aggarwal says on the call. "We have doubled our selection, added 80 million new items, doubled up our seller base...have added a lot of aspirational features that allows customers to afford even more," Aggarwal adds.

Before beginning the sale, Amazon actually opened up the sale exclusively for its prime subscribers, 12 hours in advance.

Agarwal claims that in the last over 10 hours, the company has managed to surpass the day one of Diwali last year.

"Focus on customers, Diwali will come every year," quips Agarwal as he logs out.

The screen projects a video clip of the popular American drama, Game of Thrones and then on to a company video just for employees.

The controversy over ‘churan and hing’

Next I manage to catch up ironically at the pantry with Saurabh Srivastava, director, consumables & FMCG, at Amazon India.

Under this category, Amazon India sells everything from tea bags and coffee to ‘churan, hing and haldi’. 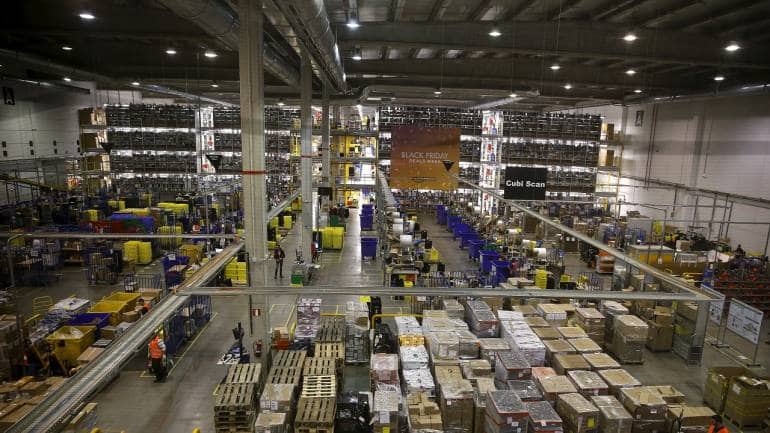 People work during Black Friday deals week at an Amazon fulfillment centre in Madrid, Spain, November 24, 2015. Spain's economy grew faster than most others in the euro zone from July to September, but turning the recovery into votes in the national election next month still looks like a struggle for Prime Minister Mariano Rajoy. Picture taken November 24, 2015. REUTERS/Andrea Comas - GF20000074365

In return, Amazon came up with a strong response stating that ‘hing and churan’ sales were a sign of key shift in the online purchasing pattern of India’s buyers.

"As we get close to Diwali, we will bring a lot more Diwali relevant selection such as sweets, chocolates, dry fruits etc, which people buy for Diwali," says Srivastava.

The company has refrained from setting up a public board this year to display live sales numbers. Am told, they are too confidential figures to be displayed publicly.

About to strike 12 am, the annual sale begins

It is about to strike 00:00 in a few minutes and the anxiety amongst employees is palpable.

This Diwali indeed is expected to be one of the game changers for the Indian online commerce industry.

Unlike last year’s Diwali, one of the key players Snapdeal has now ceded to exist in its earlier avatar. The new entrant however is Paytm Mall, with its parent Paytm having raised USD 1.4 billion from Softbank this year. The two veterans -- Amazon and Flipkart are fighting an intense battle for leadership position even as the latter has raised almost USD 2.9 billion in funding this year.

Hours later, I step out of the building, am told that the company actually incurred a technical glitch with many users finding it difficult to transact as the platform crashed intermittently.

For now there are no reports of rival Flipkart facing any such issue.

In a couple of days we will get to know who won the Number 1 spot in GMV and unit sales during Diwali festive sales of 2017.