A nationwide lockdown was sure to hit India’s economy. Most economists had already lowered their growth projections at the first sign of a prolonged closure. Even then, the latest PMI number is a shocker. The IHS Markit India Services Business Activity Index posted 5.4 in April compared with 49.3 in March. To put this number in perspective, this is the biggest contraction in services output since the data collection began 14 years ago, in 2005.

Even before the services PMI data was released, the manufacturing PMI too had shown a significant decline—to 27.4 in April from 51.8 in March.

The services sector data though looks uglier. This is not only because of a steeper fall but also the fact that losses in the services sector cannot be recovered as quickly even after the economy opens up. The likely change in consumer behaviour after the lockdown could also add to services sector woes. With a fear that the disease spread may last for a while, consumers are unlikely to step out to avail services as they used to prior to the lockdown. 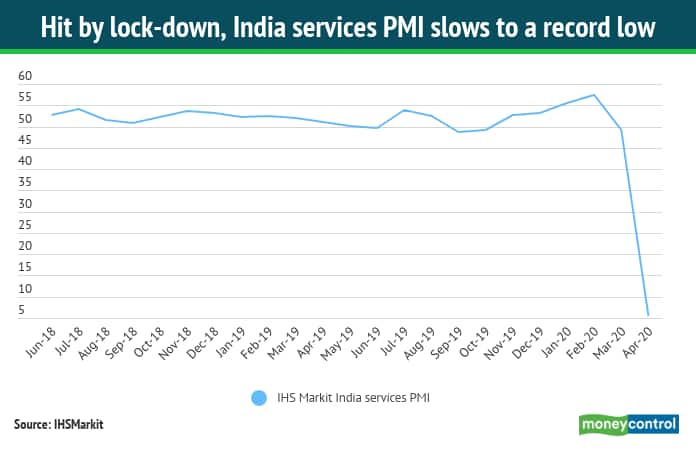 There are three quick takeaways from the April services PMI data:

The fall in March employment rates was just 2 percent compared with 2019-20 average of 404 million. But in April, the fall was 30 percent. This, according to CMIE, translates to 122 million job losses in April. Job losses are likely to continue in the absence of early recovery.

Three, if the April trend in manufacturing and services continues, the Q1 GDP data is set to be a disappointment. The services sector contributes about 55 percent to the national GDP, followed by industries and agriculture.

The Composite PMI Output Index, which measures combined services and manufacturing output, also sank to a new record low in April. At 7.2, the index fell from 50.6 in March and was indicative of an unprecedented decline in private sector business activity. The latest reading was the smallest by some margin, eclipsing the previous low seen in February 2009, the survey statement said.

The nationwide lockdown that began on March 24 has been extended twice, this time until May 17. The near-stagnation in the economy has left small businesses and daily wage earners in a state of uncertainty. The government announced a Rs 1.7 lakh crore welfare package, which was followed up by the Reserve Bank of India with a few measures to ease liquidity constraints in the economy. But, these haven’t benefited the unorganized sectors much.

In response, the RBI announced a 75 basis points rate cut, besides pumping in money to banks to lend to different sectors. But, the response from the government’s side has been inadequate. There is widespread expectation that the Narendra Modi government will soon announce a substantial fiscal package to help the economy. In light of the lacklustre activity in services and manufacturing, it is even more critical now for the government to respond quickly to contain the damage to the economy.