The ED probe found that funds received from homebuyers and meant for the construction of projects were diverted for personal use or fraudulent purposes, leaving the projects in limbo.

The current status of construction of Mantri Serenity in Bengaluru (Credits: Dhananjaya)

Moneycontrol has been able to access a document showing that the developer was arrested as part of a money-laundering/fund diversion investigation and has been remanded in ED custody. But this may be cold comfort for people who have invested in delayed projects like Mantri Serenity and Webcity, who are unsure of their next steps.

What does the ED investigation say?

The ED probe found that funds received from homebuyers and meant for the construction of the projects were diverted for personal use or fraudulent purposes, leaving the projects in limbo.

According to a June 25 statement from the ED, “During the investigation, it was also noticed that the company offered various Ponzi like schemes which were named as Buy-back plan and advance money was collected for the flats/homes. In some cases, the company has not refunded the amount to the buyers even after clear direction of Real Estate Regulatory Authority (RERA).”

The ED said Mantri owes banks approximately Rs 5,000 crore, out of which about Rs 1,000 crore is overdue and some of the loans have been classified as non-performing assets (NPAs). Buyers left in the lurch

Several real estate projects initiated by Mantri Developers in Bengaluru have been stalled for more than five years. Many of those who bought into these projects have also filed a case with the Karnataka Real Estate Regulatory Authority (KRERA).

Dhananjaya Padmanabhachar, co-founder and principal secretary of Mantri Serenity Home Buyers Forum, said that he had paid Rs 70 lakh in 2012-13 for an apartment in the project being developed at Doddakallasandra in South Bengaluru.

“The earliest date of possession was December 2015. However, till today we have not got our apartments. Some homebuyers for 2,152 units have paid 90 percent of the money, some have even paid 100 percent,” he said.

In 2020, they filed a first information report (FIR) at Subramanyapura Police Station, and the investigation is still ongoing, he added.

The forum wrote to the ED on June 17 claiming that the builder was trying to launder money through misusing the undivided share of land (UDS) clause and concealment.

UDS is a part of the land held by the buyer of the apartment in a residential complex. If the building undergoes redevelopment or the land is acquired by the government, the property owners will get compensation based on the UDS held by them.

Padmanabhachar said in the agreement for sale, the promoter mentions the project area as about 19 acres. However, in the deed of declaration, the promoter declares 40,42,540 sellable areas, a subdivision of the land that contravenes the law. “That violates FAR (floor area ratio). The maximum permissible FAR in Bengaluru is 3.25, however, for Mantri Serenity, it comes to 4.73!”

The FAR is the relationship between the total amount of usable floor area that a building has, or is permitted to have, and the total area of the lot on which the building stands. “The homebuyers need to be given a proportionate share of land, especially when we are paying for the maintenance of the entire land,” Padmanabhachar added. 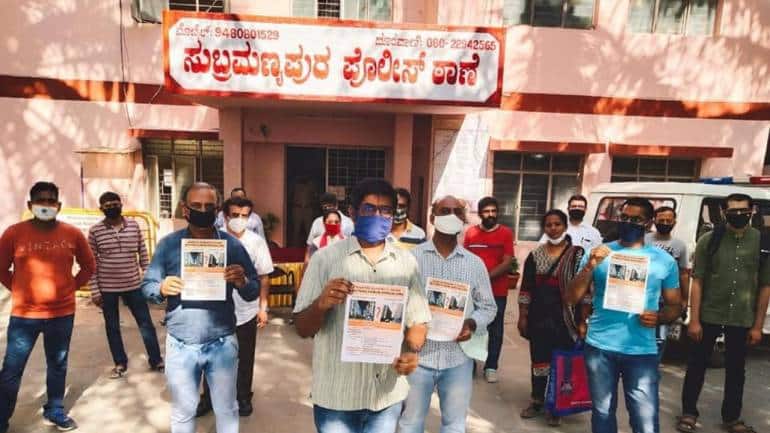 Another buyer, Devang Khamar, who like Padmanabhachar is an IT professional, had invested in the buy-back scheme in 2013. He had put Rs 10 lakh hoping to double the investment by 2016, as promised.

However, not only did he not get the money, but he also had to pay interest on a Rs 70 lakh bank loan. This is because the scheme mentioned that apart from the Rs 10 lakh he put in, a bank loan of Rs 66 lakhs will be initiated in his name (on pre-EMI basis, where the repayment is of the interest component only).

Over the next three years, the developer said, the monthly amount he paid would be reimbursed the following month. After three years, according to the scheme, he could opt out with a return twice that of the investment, and the loan shall be closed. Or he could choose to retain the deal, and pay for the remaining loan amount with interest and keep the apartment.

After three years, Devang had opted out of the scheme and sought the promised Rs 20 lakh. However, not only was this money not forthcoming, Mantri did not close the loan and it is still ongoing. The loan amount has increased to Rs 70 lakh.

“Right now, I have stopped paying the EMI loan and as a result, the banks have taken back my credit cards. And I keep getting notices regularly,” he said.

Moneycontrol has sent a set of questions to the builder and will update the story after they respond.

No need to panic, advocates say

Santhosh G R, advocate and consultant at GR Associates, said the ED intervention is a criminal liability. The homebuyers have a legal contract with the company in respect of the property which is civil, he added.

“The ongoing ED probe against the company, CMD and directors are as per Prevention of Money Laundering Act, 2002, and these are criminal liabilities. The homebuyers can stay calm as this does not have an impact on the ongoing RERA cases or consumer forum cases filed by them,” he said.

Another advocate, Akash Bantia said the entire amount spent by the builder will be under the scrutiny of ED. At the most, the builder’s bank account will be frozen, he said.

“After the investigation, ED will find the money trail from the builder’s side. Then it will approach a court, and a trial will take place according to their findings. The personal assets of company owners will be attached and the court will definitely try to protect the rights of the homebuyers,” he said, adding that in the case of Jaypee Infratech in 2017, homebuyers have started getting their money back.

But others warn that it could be a long legal battle.

Anagha Kulkarni, an advocate with the Bombay High Court, pointed to the arrest of Pun-based DSK Group’s chairman D.S. Kulkarni and his wife in 2017. They were accused of defrauding more than 33,000 homebuyers of ₹2,000 crore. “Years later, the home buyers are still undergoing a long legal battle,” she added.

Bantia said how things proceed will depend on the ED investigation and the liquidity of the builder’s assets. The ease or otherwise of recovery of homebuyer’s investments hinges on these factors, he said. Instead of waiting for the ED investigation, individual homebuyers should approach RERA, high court or even Supreme Court, Bantia said.

Advocate Satish Kumar suggests that the terms and conditions mentioned in the individual buyer agreements also matter. “We have to look closely at the project agreements before RERA came into effect in 2016. If the projects come under RERA, the homebuyers are in a safer zone. For projects before RERA, the agreements will change according to the terms mentioned in them,” he said.
Souptik Datta
Tags: #Bengaluru #Enforcement Directorate (ED) #home buyers #Mantri Developers #PMLA #Real Estate
first published: Jun 27, 2022 08:35 pm