Six of the 10 largest fund houses in India are bank-sponsored. Indeed, the houses backed by banks have dominated the industry. But, Union Mutual Fund, which is co-owned by Union Bank, is ranked a lowly 27th in terms of investment assets managed.

However, the fund house seems to have turned the corner on one front at least. Union MF’s schemes are now finding more acceptance among mutual fund distributors.

Now, 27 percent of Union MF’s assets under management (AUM), is sourced from mutual fund distributors (MFDs). About 52 percent of the share is still from Union Bank’s branch network and the remaining 21 percent is from direct investors. Back in March 2020, Union Bank’s branch network contributed to a majority of its asset base, with only eight percent coming from other sources.

Some MF distributors say they have started looking at the fund house seriously only recently, after the fund house, in their opinion, crystalized its investment process. “They have now got good people on board, which gives the confidence that the process will continue,” says Vinod Jain, principle advisor and founder of Jain Investment Planners.

Building a robust investment process
In 2018, Union MF roped in Vinay Paharia to take over the role of its chief investment officer (CIO). Paharia was a fund manager at Invesco, where he had worked with another process-driven CIO, Vetri Subramaniam (now with UTI MF). 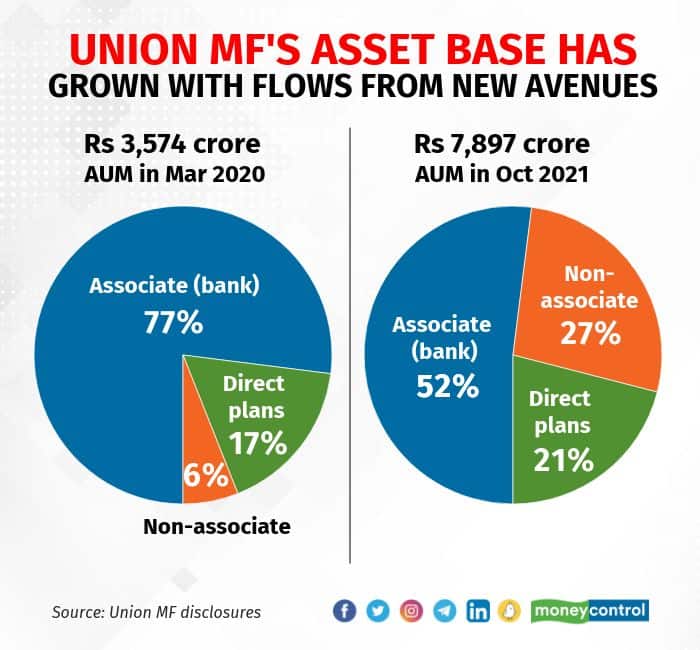 “We found Vinay to be very focused on processes. He came across as someone, who won’t deviate from the process or buckle under short-term market pressures,” says G Pradeepkumar, chief executive officer of Union MF.

After joining Union MF, Paharia put in place a process that involved both fundamental and quantitative approaches, after analysing factors have worked in the Indian market.

“We found out that growth has had a strong bearing on stock price returns. So, we look at what the growth potential of a company’s fair value is over five and 10 years,” says Paharia.

Apart from growth, it looks at value and quality factors.

Paharia and his team look at fundamental indicators such as long-term projected returns on equity (ROE), future earnings growth, riskiness of the company’s cash flows, to arrive at the fair value of a company.

“Even businesses with negative ROCEs – new-age loss-making internet businesses, for example – may turn into excellent businesses 5-10 years down the line, if operating leverage kicks in,” Paharia says.

For example, Union MF has invested in the recently listed personal care retailer Nykaa in four of its schemes.

The fund house will exit an investment only if there is a fundamental change in the investment rationale, sharp uptick in valuations or an alternative idea in the same sector that presents a better investment opportunity.

On the debt side, the fund house took it on its chin when the IL&FS crisis precipitated in 2018. Union MF doesn’t avoid credit calls on low-rated debt papers, but prefers duration or interest rate risks. The fund house has built a model that helps predict interest rate changes, to manage duration risk. “Our focus is on safety, liquidity and then returns,” Pradeepkumar says.

Union MF’s Balanced Advantage Fund is the second in the performance ranking in its category with compounded annualised returns of 13.7 percent. The scheme follows the discounted cash flow (DCF) model to choose stocks.

“We project cash flows of each of the Nifty companies and measure the fair value for Nifty,” Paharia points out.

Slow starterThe fund house didn’t engage with MF distributors in its initial years. Pradeepkumar says that large banks at the time were expecting commissions that Union MF wasn’t willing to pay. He also analysed the investment pattern of Union Bank of India’s account holders and realised that only a tiny fraction had invested in mutual funds during the time. That, he said, became his target segment in the initial years. But the lack of a strong distribution network still limited inflows.

When KBC (the foreign partner) exited Union MF in 2015, the latter still had an incomplete product basket. This was also the time when SEBI had raised the networth requirement for MFs to Rs 50 crore from Rs 10 crore. It mandated that MFs invest 1 percent of funds raised in new fund offers (NFOs). The maximum limit stipulated was Rs 50 lakhs.

“These developments delayed some of the product launches that we had planned,” says Pradeepkumar.

In 2018, Union found a JV partner in Japanese life insurer Daii-chi Life, which infused the capital in the asset management company and has also given full flexibility to Union MF to look at all avenues of growth, banking channels, MFDs or digital platforms. MF distributors say they were sceptical at first, as they were not sure how much flexibility a public sector bank would allow the new fund management team. That was also the time Paharia came in.

“As we started to interact with Paharia, we realised that he was given the flexibility to do what was required, without any interference,” says Anup Bhaiya, managing director of Money Honey Financial Services.

After Corporation Bank and Andhra Bank got merged into Union Bank, the latter now has a network 9,300 branches at its disposal. Already these new branches are contributing one-fifth of Union MF’s sales.

After 10 years of operations, Union MF still has a long way to go to get wider acceptance. But it seems to have finally taken the first step to start on that journey.

Jash Kriplani is a journalist with over ten years of experience. Based in Mumbai. Covering mutual funds, personal finance. His last stint was with Business Standard, where he covered mutual funds and other developments in the financial markets
Tags: #invest #Mutual Funds
first published: Dec 13, 2021 09:49 am