The failure of the real estate regulator in Haryana to give relief to homebuyers in the Green View project developed by a state-owned company is only one instance of its limitations and indifference.

NBCC Green View is a project based in Gurugram, near New Delhi, where homebuyers have been evacuated due to faulty construction, despite the project being relatively new. Homebuyers are still awaiting resolution.

About 10 years ago, when Sanjeev Singhal, 47, booked an over 2,000 square foot, four-bedroom apartment in Gurgaon, he and his family had no clue about what was coming.

Singhal, currently working as a general manager with a public sector company, booked the apartment in the NBCC Green View project in Sector 37-D of Gurugram in March 2011. The builder was NBCC (India), formerly known as National Buildings Construction Corporation Ltd., a central government enterprise.

Singhal said he paid about Rs 95 lakh over six years for the apartment, using up all his savings and taking a loan of Rs 50 lakh to fund the purchase. The scheduled date of possession was May 2015, but NBCC handed over the apartment in December 2017, after a delay of two years and eight months, with the work still incomplete.

Also read | What does Supertech's insolvency mean for its 25,000 homebuyers

However, the construction was so poor that within a few months, cracks started appearing on the pillars, beams and slabs of the buildings and the plaster began to peel off. Less than five years after they were handed over, the buildings in the Green View project were declared unsafe to inhabit. 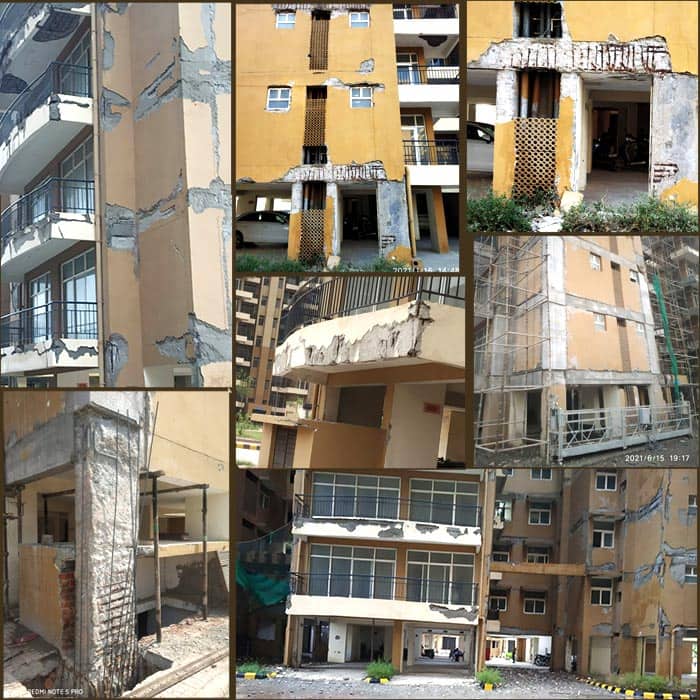 The Indian Institute of Technology Delhi, which NBCC appointed to examine structural and other defects in the buildings, advised the company in its follow-up report dated October 6, 2021, to re-examine the feasibility of repair works after evacuation of the buildings.

Besides a long legal battle, Singhal is left with no savings and an outstanding home loan of about Rs 31 lakh, payable in EMIs of about Rs 49,000 for 12 years. He now lives in a smaller flat, paying Rs 5,000 per month as rent, over and above what NBCC is paying homeowners for alternative accommodation. Moreover, NBCC has agreed to pay rent only for six months.

“There is no assurance whether NBCC will pay the rent after these initial six months or not in case the dispute is not settled,” said Singhal.

The Green View project developments are unprecedented and the future of hundreds of families is in limbo, left in the lurch by a public sector company.

Even though Haryana set up a real estate regulator more than five years ago, owners of Green View apartments have been running from pillar to post trying to get respite. In many other cases, too, the Real Estate Regulatory Authority (RERA) has failed to help homebuyers.

Outside the ambit of RERA

According to the rules prescribed under the central Real Estate (Regulation and Development) Act, 2016, every project being developed exceeding an area of 500 square meters or a project with more than eight apartments being constructed must be registered with the respective state RERA.

Besides, it is mandatory for all ongoing projects where the completion certificate or occupancy certificate has not been issued to comply with the registration requirements under the Act. However, some states tweaked the rules while setting up the regulator.

“When Haryana RERA came into existence, the authority decided to exclude all projects that had already applied for occupancy certificates. Here’s where NBCC Green View escaped the scrutiny of the Haryana RERA – the developer had applied for an OC before implementation of RERA in the state,” said Deepak Jain, treasurer of the Association of Apartment Owners of the NBCC Green View group housing project.

In many other cases, remedy under RERA is not available to homebuyers because the projects are out of its ambit. However, legal experts said that following subsequent amendments, the RERA can still take cognizance of such issues and help homebuyers.

The Haryana Real Estate Regulatory Authority, Gurugram, derives territorial jurisdiction over all real estate projects in the district of Gurugram, irrespective of whether the project is registered with the authority or not, said Mani Gupta, a partner at Sarthak Advocates & Solicitors.

NBCC Green View is situated within the Gurugram district planning area and the authority can take suo moto cognizance, conduct an enquiry/investigation and call upon experts for assistance to investigate contraventions and violations including structural defects and collapses to ensure compliance/rectification at the cost of the promoter or compensation to the allottees, and to penalise the promoter, Gupta explained.

However, homebuyers of NBCC Green View said they did not receive any such respite from RERA.

The other problem is implementation and follow-up of RERA orders. The orders either don’t get executed smoothly or, in many cases, are not implemented on time.

While there are stringent provisions for non-compliance of orders and provisions for penalties and other measures, there are numerous instances of homebuyers receiving favourable orders but being forced to wait for months or even years for them to be implemented.

In the past few years, insolvency proceedings have been initiated against real estate companies. When a company is admitted to corporate insolvency proceedings, a moratorium kicks in on all other pending civil, consumer, RERA cases, including implementation of orders, until resolution is achieved. If someone files a complaint under RERA or already has a favourable order, no action will be taken once a builder is admitted to bankruptcy court.

Also read | The long road ahead for Supertech homebuyers

The rationale for the moratorium, in the words of the Bankruptcy Law Reforms Committee report, is “to provide a calm period for creditors and debtors to negotiate the viability of the entity.”

Gupta said that during insolvency resolution, a time-bound moratorium against debt recovery helps assure creditors and debtors that assets are protected while they negotiate.

“The BLRC further states that the motivation behind the moratorium is that it is value-maximising for the entity to continue operations even as viability is being assessed. There should be no additional stress on the business after the public announcement of the insolvency resolution process,” Gupta added.

Also read | Even if your housing project is stuck with bankruptcy court, do not stop your EMIs

Gupta’s advice to homebuyers whose builders have landed up in the National Companies Law Tribunal is to: (a) file financial claims with the interim resolution professional appointed by the NCLT, and (b) participate in meetings of the committee of creditors and vote on various proposals.