A visually challenged person can scan and identify the denominations by checking the front or reverse side of a currency note, including folded notes

On January 1, 2020 the Reserve Bank of India (RBI) launched a mobile app for visually and /or hearing impaired people to identify the denomination of currency notes. Called the Mobile Aided Note Identifier (MANI), it seeks to help such people who faced various problems in accessing the new and old currency notes of the Mahatma Gandhi Series. The Reserve Bank of India (RBI) has clarified, however, that the MANI app does not authenticate a currency note as genuine or counterfeit while scanning them.

Download the MANI app on to your smart phone. Just make sure that you type out ‘Mobile Aided Note Identifier’ and not just MANI or some other such short form.

Once you download the app, you can start using it. You do not need to open any online account or require any password to operate the app. Just give the app the permission to use the camera as it needs to scan the currency note that you aim to identify. While setting up the app, you can also select voice commands if you want assistance. Select ‘visual’ or ‘visual and hearing’ to proceed further for scanning the currency note. If you select ‘none of the above,’ the MANI application will be close automatically.

When a currency denomination is to be identified, select the ‘scan currency’ option on the app. The currency note should be placed at a distance of approximately five to seven inches from the rear camera.

Using this app, you can identify the denomination of the currency in three ways: text on screen, audio notification and vibration. 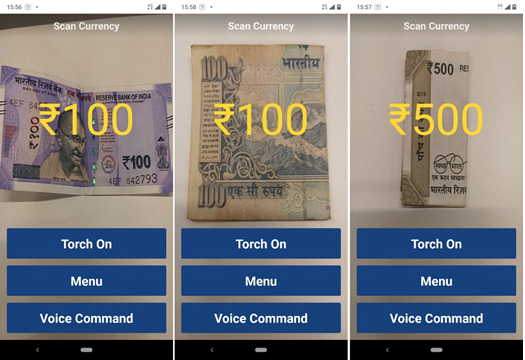 For people with hearing and visual impairments, the app has pre-defined vibrations for different denominations; one vibration for Rs 5, two vibrations for Rs 10, three for Rs 20, four for Rs 50, five for Rs 100, six for Rs 200, seven for Rs 500 and eight for Rs 2,000. In case the app is unable to identify the denomination, it uses a long vibration and asks for the note to be scanned again.

On social media, some of the users of the MANI app have raised concerns on the accuracy of the features offered. For instance, some of them complained saying that when they scanned a Rs 50 currency note, app showed Rs 100 on the screen; similarly, while scanning a new Rs 100 currency note, it was identified as Rs 50.

We used the MANI app while working for this story and it was accurate in identifying the denominations of the currency notes while scanning.

Jitendra Solanki, SEBI Registered Investment Adviser and Founder of PlanSpecialNeeds says, “It may be difficult for the visually impaired to scan every time they make payments or receive cash. Also, they may not like to scan cash in public places such as while depositing or withdrawing at the bank and at neighbourhood shops while purchasing groceries.”

The Secretary General of an NGO for visually impaired, requesting anonymity, says, “It’s a great app for visually impaired from the RBI. But, there is a scope for improvement. Bold letters for the low-vision persons would be more helpful. Also, introducing a feature to distinguish between real and counterfeit currency notes will be valuable for them.”Get access to India's fastest growing financial subscriptions service Moneycontrol Pro for as little as Rs 599 for first year. Use the code "GETPRO". Moneycontrol Pro offers you all the information you need for wealth creation including actionable investment ideas, independent research and insights & analysis For more information, check out the Moneycontrol website or mobile app.