Confused on which ITR form to use? Here’s help

Selecting the right ITR form is crucial to avoid unnecessary delays in processing returns and conflicts later on.

Income tax return (ITR) forms differ based on the type of incomes of assessees, nature of income (domestic or foreign) and so on. For instance, there is a different ITR form for the salaried and a separate one for businessmen and professionals.

Which ITR form is applicable to you?

ITR-1: If you are a salaried individual and your total income for the financial year 2020-21 was up to Rs 50 lakh, then ITR-1 is for you. Remember, salary also includes pension income.

You can also file a return in ITR 1, if you earn income from other sources such as interest from bank deposits and one house property. Also, if you have agricultural income of up to Rs 5,000, you can use ITR 1 to file your return. 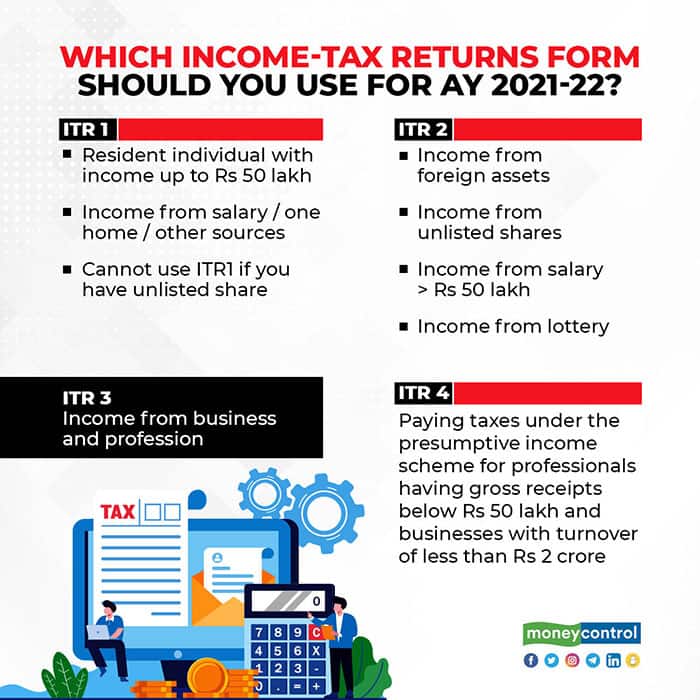 Now, ITR-2 could also be used if you have income in the form of capital gains, from more than one house property, or uf you earn a foreign income, or own a foreign asset. If you hold a directorship in a company or you simply hold unlisted equity shares, then you must us ITR-2 for filing returns.

ITR-3: This form is for businessmen and professionals who do not earn a salaried income. All the income heads eligible for ITR-2 are valid for this form as well. If you are a partner of a firm, you should use ITR-3.

ITR-4: ITR-4 can be used by both resident individuals and HUFs who had income either from profession or business in the previous financial year, but want to adopt the presumptive income scheme (PIS) to calculate their income tax liability. According to Sections 44AD, 44AE and 44ADA of the Income Tax Act, 1961, PIS can be used by businesses that had a total turnover of less than Rs 2 crore. It can also be used by eligible professionals with gross receipts of less than Rs 50 lakh during the previous financial year. The main advantage of opting for PIS is that you are not required to maintain books of accounts.

Under the PIS scheme, businesses can estimate their net income at the rate of 6 percent of the total turnover, if gross receipts are through digital modes of payment. It would be at the rate of 8 percent in the case of cash receipts. On the other hand, professionals such as doctors, lawyers, architects and interior designers who opt for PIS have to declare 50 percent of the total receipts during the fiscal as profit and get it taxed accordingly. However, both business owners and professionals can voluntarily declare their income at a higher rate than mandatorily required under the scheme.

Remember, if a person’s business turnover exceeds Rs 2 crore, she cannot opt for PIS. So, ITR-3 will be applicable instead of ITR 4. Besides that, the total income to file return using ITR-4 should not exceed Rs 50 lakh.

Also, those who wish to set off expenses with income earned cannot opt for PIS and thus ITR-4 will not be applicable.

What happens if I file my return in the wrong ITR form?

Sudhakar Sethuraman, partner, Deloitte India warns that in case you use the wrong form, the income-tax officer may consider such return as “defective under the provision of section 139(9) of the Income Tax (I-T) Act.”

However, the tax department informs the assesses while processing the return that they have filed a return in the wrong ITR form and give a chance to rectify it or file it using the correct ITR form.

“Where a taxpayer selects the wrong ITR form and files the return, the option to rectify the mistake by filing a revised return within the prescribed time limit is available,” says Sandeep Jhunjhunwala, Partner, Nangia Andersen LLP.

After you get the notice, you get 15 days’ time to file a revised return. “If the defect is not removed in time, the ITR may be treated as invalid and the taxpayer may face punitive consequences as though the return wasn’t filed,” says Jhunjhunwala.