Payment banks will be allowed to apply

The central bank plans to offer new licenses to set up small finance banks and allow payments banks to also apply for licenses, people familiar with the development told Moneycontrol.

If payments banks are allowed to become small finance banks, it will allow them to offer a wider bouquet of services, including microloans. It will also be an acknowledgment of the tepid response that payment banks have received since they were allowed by the Reserve Bank of India in 2015.

“New licensing norms are coming, and fresh licenses will be issued,” said one of the sources. “Payment Banks will be able to apply for a small finance bank license.” The new licenses are not exclusive to payment banks. Other, too, can apply.

Payment banks, set up to help increase financial inclusion, cannot lend money or issue credit cards. They can accept deposits up to Rs 1 lakh per customer and issue debit cards and ATM cards.

But payments banks have failed to live up their promise. Of the 11 that were issued licenses by the RBI, only four are still in operation -- Airtel, Paytm, India Post Payments Bank and Reliance Jio Payments Bank.

Small finance banks can undertake basic banking activities of acceptance of deposits and lending to unserved and underserved sections, including small business units, small and marginal farmers, micro and small industries and unorganised sector entities, and there will be no restriction in their area of operations.

However, there are credit norms. RBI wants small finance banks to lend 75 percent of their total credit to borrowers in the priority sector, like those working in agriculture, small enterprises and low-income earners. That limit for commercial banks is 40 percent. Also, small finance banks will have to make sure that 50 percent of their loan portfolio should be advances up to Rs 25 lakh.

Ten entities have been given licenses to start small finance banks.

Experts said that for banks to flourish there has to be a balance between asset and liabilities. “(The banking business) is unviable in absence of lending… you are not going to make enough money,” said Abheek Barua, Chief Economist and Executive Vice President at HDFC Bank.

However, small finance banks will be lending to the lower tier of the SME sector, where risk levels are much higher. “One needs to have a comprehensive understanding of the borrower’s business because that space is volatile and it is a risky territory to be in,” Barua said. 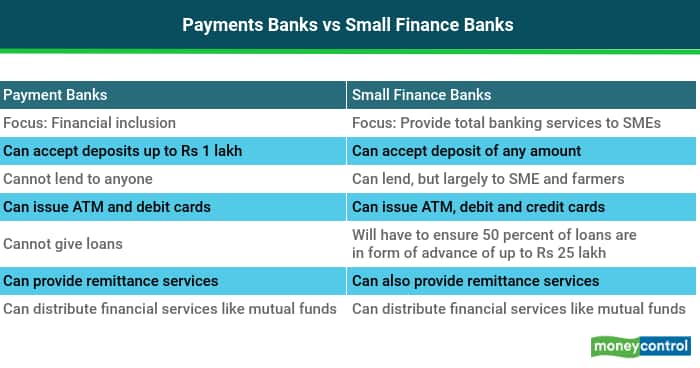