172@29@17@136!~!172@29@0@53!~!|news|business|mutual-funds|why-sbi-fund-mgr-is-long-nbfcs-autos-despite-steep-valuations-964962.html!~!news|moneycontrol|com!~!|controller|infinite_scroll_article.php!~!is_mobile=false
Subscribe to PRO at just Rs.33 per month. Use code SUPERPRO
you are here: HomeNewsBusinessMutual Funds

In an interview with CNBC-TV18, Sohini Andani of SBI Mutual Fund talked about her funds' holdings and explained why she is bullish on consumption plays like autos, NBFCs and cement, despite valuations being perceived by some as being stretched.

In an interview with CNBC-TV18, Sohini Andani of SBI Mutual Fund talked about her funds' holdings and explained why she is bullish on consumption plays like autos, NBFCs and cement, despite valuations being perceived by some as being stretched.

Below is the transcript of Sohini Andani’s interview to Anuj Singhal and Sonia Shenoy on CNBC-TV18.

Anuj: One thing which stands out looking at your portfolio is you are in all the right spaces, the market leading groups, non-banking finance companies (NBFC), cement, autos. Do you think these sectors will remain the market leaders for the foreseeable future? 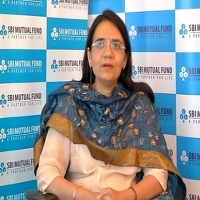 A: Basically, the market keeps changing its leadership time and again. So, when we buy into stocks, we really do not look at it from a very short-term perspective. It is based on the long-term growth prospects that we invest. But market keeps rallying with the sector rotation happening on and off based on the money flow. But from the outlook perspective, the outlook for some of these sectors remain quite good. But the valuation comforts have reduced post the rally into these sectors.

Sonia: So, let us talk about some of the sectors then. I was going through your State Bank of India (SBI) Magnum Midcap fund and in that, you have holdings in a lot of these FMCG names like Britannia. We were just discussing these stocks a while back where they are hitting new highs day after day. Is there still value in these names or do you think that valuations are just too steep now?

A: Valuations are steep across the market. What you see is that wherever the growth visibility is strong, the stocks continue to perform well and Britannia is one such stock that apart from the overall consumption theme, the company has benefitted a lot from a lot of changes which are done on the products side, on the distribution side, on the cost side. And they are benefitting much more than just the broad consumption uptick. So, those factors remain for long-term. But yes, valuations have moved up significantly. So, now what you get is the growth going forward and not a price-earnings ratio (P/E) rerating.

Anuj: What about some of these midcap pharmaceutical names that you have in your portfolio? Strides Shasun which has underperformed a bit, but is picking up now. You have Sanofi India as well which is a bit of an unusual name and in the related space, of course, Dr Lal PathLab as well.

A: Sanofi and Dr Lal are both plays on the domestic pharmaceutical market. We believe that there is huge scope for the domestic pharmaceutical market to pick up. And the businesses like Pathlabs are quite scalable models and they can be grown at a high pace for the next 5-10 years and that is a space, we believe we will see a good growth as the affordability increases for the people and also the awareness to do related to a lot of wellness activities. So, that space, we are pretty positive on.

Sanofi is again, a pure multinational corporation (MNC) play in the domestic market which would benefit with the domestic pharmaceutical market picking up which is facing pressure for the last two years for various reasons on the distribution front or in front of the government action on pricing policy, etc. but they have been, the company within the MNC space which has been growing quite fast in the domestic market vis-à-vis the other MNC companies and they generate good cash flows. So, it is looking quite attractive.

Sonia: The other space which has made you big money is the NBFC space. Stocks like Cholamandalam Investment and Finance Company are up almost 70 percent this year and you hold that stock in your midcap fund. You also hold names like Mahindra & Mahindra Financial Services. Is there more money to be made here?

A: Yes, it depends upon the horizon that you have on the stock. So, as I said, most of the stocks to the market as a whole and midcap indices per se have rerated significantly and so has the NBFC space which has again got rerated significantly. However, this being the cyclical play as the recovery in this sector continues to improve, on the commercial vehicle (CV) side, while we saw a growth on medium commercial vehicles (MCV), the light commercial vehicle (LCV) growth has now just started to pick up. So, that is again likely to benefit Chola as a company.

For Mahindra Finance, this monsoon being good, the recovery phase is just likely to improve going forward. Plus, the growth will pick up with the tractor and utility vehicles (UV) both seeing a pickup in the growth. So, these spaces still look attractive. So, growth is an upside that you get again as I said in case of other pharmaceutical companies whereas the P/E rating part has been overdone, I suppose.

Anuj: What about a stock like Carborundum Universal. We do not talk about that, but this stock has also moved a bit to its all-time highs over the last 2-3 months.

A: These being cyclical stocks, so if you see the company has not done well in the past 4-5 years, one because of the slowdown in the domestic industrial space and also some of their acquisitions outside India which did not do well for them. And because of some of the efforts that the company has put like shifting some of the manufacturing back to India and also the industrial activity picking up slowly in India. They are likely to do well over the next few years.

Sonia: I was just going through holdings of your SBI Blue Chip fund and in that, in the auto space, you have an exposure to Eicher Motors, Mahindra and Mahindra, Tata Motors and Maruti. So, you are exposed to two-wheelers, SUVs, luxury cars and small cars. Interesting that you have hedged your bets there. But within autos, which is the space that you see providing the highest amount of growth in the next 3-6 months?

A: The growth drivers for different companies are different. So, for Eicher, they have been growing at a high rate on the two-wheeler side and on the CV side, there is a pick up in the growth. In case of Tata Motors, it is the Jaguar Land Rover (JLR) growth which is an out of India growth which is seeing a pick up whereas Maruti has already seen a pickup because of the new model launches that they have done. And Mahindra and Mahindra is picking up on the tractor side and even the UVs because of the new launches will do well. So, overall, it is the consumer discretionary space that we like and these are all the names within that space where we believe that there is likely to be an uptick in the growth coming in.

Anuj: Before we let you go, one last word. Your midcap fund has delivered compounded annual growth rate (CAGR) of 42 percent over last three years. Do you think we are in the phase of a market where if you select your stocks right, you can still generate this kind of alpha going forward over the next 3-4 years as well?

A: These kind of alphas are not a normal return in the market. These are abnormal returns and you cannot expect these returns to be sustained. So, what we do is that we just do the right stock selection and where the market gives a valuation based on which the fund returns are actually determined.

So, we are much more focused on the stocks based on the earnings visibility that we have long-term growth prospects that we believe in. What kind of multiples the market wants aside, that is not in our control. We believe that we will be in good stocks which have a good growth potential. The returns are based on various factors I would say including how the money flows into the market. But the returns are not sustainable what you have seen in the last three years, they have been abnormally good returns, I would say.