At its annual Facebook Connect conference, the social networking giant provided an early look into various upcoming features and functionalities in its AR creation and distribution software for developers and creators.

Facebook said on October 28 that more than 700 million people use augmented reality effects (AR) across its apps and devices on a monthly basis.

At its annual Facebook Connect conference, the social networking giant provided an early look into various upcoming features and functionalities in its AR creation and distribution software for developers and creators.

A new iOS app, codenamed Polar, will make it easier for creators to imagine, create and share AR effects and filters without the need to code, directly from their mobile phones. "Polar is built by creators for creators, with an intuitive user interface and a range of templates to help you jumpstart effect creation" the company said.

This will help creators extend their personal brand and art in new ways like a virtual sticker with its own tagline, which can then be used by people in their Stories or Reels. A select group of creators will be invited to participate in a closed beta programme for Polar later this year, the company said.

World AR will enable developers to build multiple AR experiences locked to specific latitude and longitude coordinates, similar to a theme park scavenger hunt or a guided tour of monuments in a city center. The feature is currently being tested with select brands including Japan's Sanrio and Spark Partner Network, with plans to open it up for all creators in 2022. 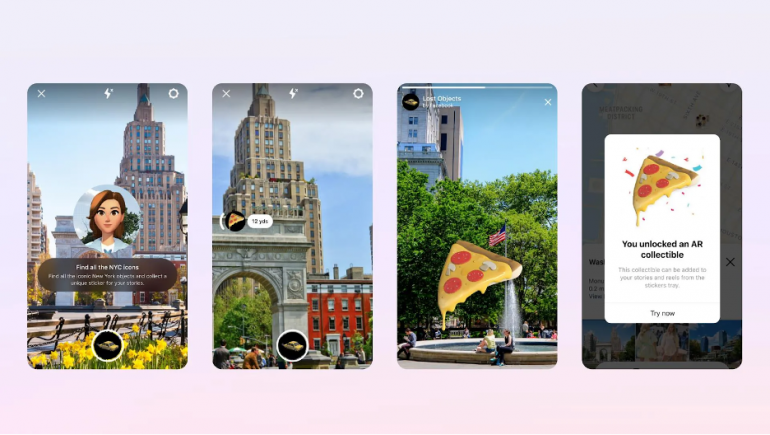 New hand and body tracking capabilities will help developers build more dynamic, complex and imaginative AR effects for Instagram. The new body tracker will allow them to map effects to 20 different 2D points on a body, and apply them to a single person, multiple people, or to isolated parts of a body in a single scene while hand tracking them allow them to enhance hand movements. These are expected to be rolled out in November.

Spark AR Studio is also getting new improvements that will make it easier for developers to build and place 3D virtual objects in the real world, including text, characters, GIFs, and stickers among others.

The company said virtual objects will be critical to the future of augmented reality and its metaverse ambition. They will be scalable across different surfaces and use cases like commerce and shopping, with virtual try-ons and product previews. This feature will be available in private beta later this year, with public availability expected in 2022.

In June this year, Facebook had announced that it will be extending AR effects to video calling on Messenger, Instagram and Portal with the launch of Multipeer API. On October 21, the social networking giant expanded access to more AR creators across the world to build interactive group effects for Messenger video calls and Messenger Rooms at present, with Instagram support coming in early November.

Group effects enable multiple participants on a video call to experience them together, at the same time. Users will be able to choose from a library of over 70 group effects by tapping the smiley face during a video call to open the effects tray and selecting 'Group Effects'.

As the Spark AR ecosystem grows, the firm is also expanding focus on training and career development resources for AR and VR developers.

During the conference, Facebook chief business officer Marnie Levine said they will set aside $150 million to train the next generation of creators to build immersive learning content.

The company is working with game engine developer Unity to bundle Unity’s “Create with VR for Educators” tool and training with its Quest 2 devices helping nonprofits and educational institutions gain the necessary skills to create VR content.

It is partnering with companies such as BYJU’S FutureSchool and VictoryXR, nonprofits like Generation, Urban Arts Partnership, and the Peace Literacy Institute; and learning organisations, including a number of historically Black colleges and universities.

Apart from this, Facebook is expanding its Spark AR Curriculum to include a new free Spark AR Professional course in early November, that will offer more than 5 hours of instructional content with multiple hands-on projects, taught by Spark AR experts.

The firm is also launching a formal certification programme for professional creators in November to demonstrate their knowledge and proficiency with Spark AR and earn a Facebook Certified Spark AR Creator badge.

"The certification program is designed for advanced-level AR creators who are seeking to distinguish their AR skills in the marketplace, either to help boost their careers or to pursue more creator-for-hire opportunities with brands and agencies" the company said.

Creators that earn the Spark AR Certification will also get access to Facebook Certification Career Network, which features more than 100 companies including agencies like BBDO, Havas Media, and GroupM, that are looking to hire skilled talent. The certification exam will be priced at $150, although Facebook said it was offering vouchers to cover the exam cost for 2,000 creators.