Upcoming Webinar:Join us for 'The Future Techshot' on Sept 22, 10:30am to gain insights into role of tech in streamlining businesses. Register Now!
you are here: HomeNewsBusinessMoneycontrol Research

Torrent sharpens focus on Indian market with Unichem’s brands – time to lock in?

The deal marks the fifth acquisition for Torrent. In 2014, Torrent had acquired a set of Elder brands. In the past few years it has acquired manufacturing plants from ZygPharma and Glochem industries and few brands from Novartis.

cemented its position in Indian branded formulations market with the acquisition of the branded domestic business (comprising territories of India and Nepal) of Unichem Laboratories. Beyond the contours of the deal, the acquisition points to relative attractiveness of the home market despite fears of regulatory headwinds. Torrent leapfrogs to a position of prominence in Indian markets with a revenue mix tilted towards India and branded generics which should aid in countering the price erosion in the US generics business. The synergistic gains should unfold in the medium term.

The deal marks the fifth acquisition for Torrent. In 2014, Torrent had acquired a set of Elder brands. In the past few years it has acquired manufacturing plants from ZygPharma and Glochem industries and few brands from Novartis.

Torrent has agreed to pay Unichem a consideration of Rs 3,600 crore for the business that generates a topline of close to Rs 992 crore – 3.6X sales and our ballpark estimates suggest around 20X EV/EBIDTA. This is a reasonable valuation considering Torrent paid close to Rs 2,004 crore or 4.8X sales to acquire branded formulation business of Elder.

Unichem’s India business comprises a portfolio of more than 120 brands and a manufacturing plant at Sikkim. Torrent will continue to have manufacturing agreement for two years for identified products. Torrent will now have 5,300 stockist pan-India with the addition of 2,100 from Unichem. It will also take over all employees (close to 3,000) of Unichem who are part of the acquired business.

What it means for Torrent?

For Torrent, the share of the India business moves up from 34 percent to 42 percent and this should augur well for medium term profitability as close to 74 percent of the combined portfolio has exposure to chronic and sub-chronic therapies as against 52 percent for the Indian pharmaceutical market.

In the coveted league of the top five

The acquisition catapults Torrent to the 5th position in the Indian pharmaceutical market from its existing position of 13th as it improves its market share from 2.4 percent to 3.4 percent. Torrent will now be among the top ten players in fifteen out of the twenty specialities, and the top five in seven key specialities. It strengthens its leadership in three key therapies namely, Cardiology, Gastro and CNS (Central nervous system). It also meaningfully enhances its presence in sub-therapies.

The combined entity will have a 62 percent share (from Torrent’s erstwhile share of 49 percent) in the anti-hypertensive market.

Unichem has a strong portfolio of branded formulations. The acquisition will add one brand of Rs 200 crore and three brands of more than Rs 50 crore each.

Consequently, for the combined entity, the number of brands in Top 500 would increase to 17 from the current 13.

Entry into the consumer business of OTC

In 2QFY17, Unichem had entered a new segment, OTX wellness, wherein it started selling its known product Unienzyme (for treatment of gastritis) as an over-the-counter product. Over-the-counter (OTX) are products consumers can purchase in pharmacies, supermarkets and other retail stores as well as online without a prescription.

OTC is Rs 20,000-crore market which is growing with changing lifestyle. Digestive supplements and vitamins are expected to do very well. Riding on the success of Unienzyme, Torrent would explore this market with other products, post this acquisition.

How will the synergy benefits accrue?

Our understanding suggests the operating margin of Unichem’s India business is lower than Torrent and throws up opportunity as well as challenges.

Since the combined entity would be among the top 5 players with Cardiologist, Diabetologist, Psychiatrist, Gastro & Nephro; Torrent would deploy its brand building and speciality focus strategy to penetrate more into these therapies riding on the equity it has with the specialists.

Unichem’s equity with doctors in specialities like anti-infective (because of Ampoxin) and Pediatric & ENT segment would be leveraged by Torrent for its own brands.

While some critics point to limitations owing to matured brands of Unichem (hence, the scope for growing prima facie doesn’t look exciting) but precedence suggests otherwise. Torrent has successfully grown matured brands from Elder’s portfolio in the past.

While the similarity of business model will eventually lead to cost synergies, the company pointed to significant difference in productivity of Medical Representatives (MR) that could be a key driver of productivity and hence, margin improvement in future. 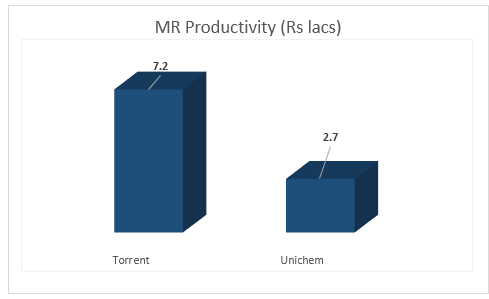 Funding of the deal

Torrent is likely to resort to debt (to the tune of 75 percent of the acquisition cost) to fund this acquisition. So the debt-to-equity ratio will move up from the current level of 0.54x to close to 1x.

The company may not hasten to venture into another debt-funded acquisition in the near future. However, should there be any lucrative opportunity to grow inorganically (especially in the US market), the promoters are open to the idea of diluting equity to fund the same.

The deal is likely to conclude by end of 2017. Our preliminary assessment suggests that without factoring in any productivity improvement, the pro forma financials suggest earnings decline of close to 8 percent for Torrent in FY18. 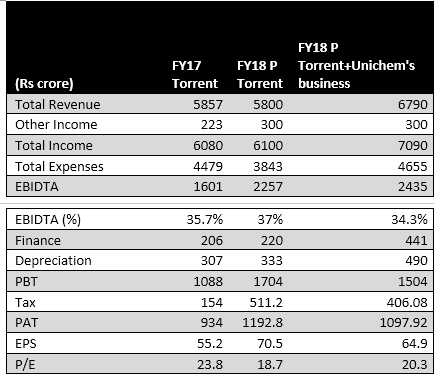 The management expects the deal to be cash accretive from the first year and EPS (earnings per share) accretive by the end of third year.