The logistics sector has seen demand stabilise after the implementation of the Goods and Services Tax (GST). Majority of the companies in this sector have witnessed better performance in the second half of the year due to a shift to organised transporters. Implementation of GST and e-way bill is helping organised players attract fresh business as smaller unorganised players are facing compliance as well as regulatory cost pressures. With the sector staring at an optimistic future after these structural changes, we analysed the results and earnings outlook of the two biggest logistics companies in India: Allcargo Logistics and VRL Logistics.

On a segmental basis, MTO revenue jumped 18 percent YoY to Rs 1,370 crore driven by healthy 26 percent growth in volumes on full container load (FCL) services. The segment recorded a 16 percent volume growth for FY18. Margin dipped due to higher contribution from FCL services. The management has expanded its less than container load (LCL) service portfolio by adding direct lanes to its worldwide network, especially intra-Asia trades. It continues to gain global market share in this segment. 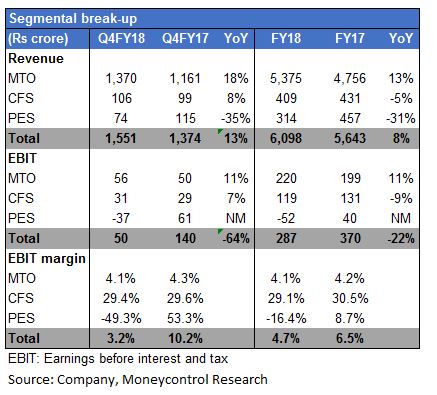 Volumes in the CFS segment grew 9 percent in the fourth quarter. However, topline growth stood at 8 percent due to weak realisations. Incremental volumes was mainly attributed to Kolkata CFS, which was commissioned in the quarter gone by. The management expects it to breakeven in coming quarters.

Allcargo accounted for Rs 15 crore of bad debts in Q4 and Rs 30 crore in FY18. The equipment division had around 50 percent capacity utilisation in FY18. The management indicated to an improvement in the coming year. The company has increased its focus on project transportation, where the current executable order book stands around Rs 160 crore. It is also exploring opportunities in neighbouring countries like Sri Lanka, Myanmar, Nepal and Bangladesh to revive this segment.

Sales for the quarter gone by increased 11 percent YoY to Rs 489 crore. Earnings before interest, tax, depreciation and amortisation (EBITDA) came in 6 percent higher than last year at Rs 44 crore. PAT jumped 43 percent to Rs 12 crore due to sharp reduction in interest expenses. For FY18, it reported a topline and bottomline growth of 7 percent and 31 percent, respectively.

Higher fuel costs and employee expenses (salary increments to comply with minimum wage regulation) kept operating margins under pressure. To protect margins, the management implemented freight rate hikes on a majority (around 60 percent) of routes in May. It is planning rate hikes on remaining routes in June. 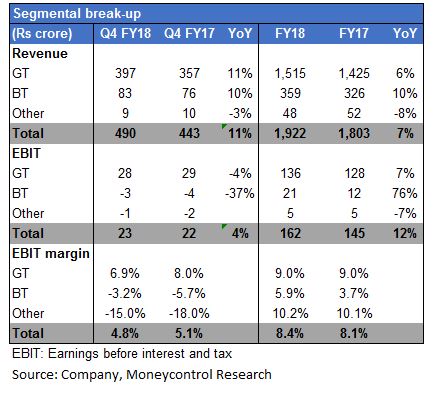 Healthy cash flow from operations helped the company reduce its net debt from Rs 174 crore to Rs 63 crore in the past 1 year. Going forward, the management has indicated a capex of Rs 500-550 crore over the next 2 years, of which around Rs 250 crore will be spent in FY19. The capex will be used to add 1,000-1,200 vehicles in the goods transport segment over the next 24 months (at a run-rate of 40-50 trucks per month). It is not looking to add additional capacity in the passenger transport segment.

VRL witnessed minor operational issues in implementation of the e-way bill. Transition to the new system has been going on smoothly and redressals are being done in a time-bound manner.

The management has guided for volume growth of 10 percent in FY19 as it expects to generate incremental growth from untapped markets like Gujarat. VRL is targeting newer markets through its entry into Surat.

VRL is our preferred pick among the two companies, although it trades at a significant premium to Allcargo on account of its market leadership position and pan-India presence. The lower valuation multiple of Allcargo is primarily due to its lower return ratios and capital intensive business model. The company is facing challenges in the form of lower capacity utilisation in the PES segment. Underperformance in this segment will continue to impact profitability of the overall group as demand visibility remains weak for the next 1-2 quarters.

VRL has seen a gradual pick-up in demand post-implementation of GST. With the business gaining scale, the company stands to benefit from operating efficiencies. Pick-up in industry demand along with the recent price hikes should help the company post 14-15 revenue growth in the coming year. The proposed vehicle scrappage policy (mandatory disposal of commercial vehicles older than 20 years) could boost VRL’s business as the average age of its fleet is around 9-10 years. We expect the company to be a steady compounder over the next few years and therefore advise long term investors to accumulate the stock on dips.

How India could improve cancer treatment