Amid the slowdown in the auto industry, Lumax Industries (Lumax) (CMP: Rs 1,332, Mcap: Rs 1,254 crore), an end-to-end lighting solution provider for automobiles, posted an in-line set of numbers in Q3 FY20. It saw more than double-digit percent year-on-year (YoY) decline in revenues, but what impressed us is the expansion in its operating profitability. The growth was led by cost control initiatives, in-sourcing of electronics and soft raw material (RM) prices.

Though the weakness continues, the outlook for the long term remains positive on the back of expectations of demand recovery from a low base, the company’s focus on margin improvement through cost reduction and localisation of imported products, increasing adoption of LED-based products and increase in content per vehicle post BS VI implementation. This coupled with an attractive valuation (11.3 times FY21 projected earnings) make Lumax a strong candidate for a long-term equity portfolio.

Quarter in a snapshot

In the three months to December, net revenue from operations dropped 11.1 percent YoY, hit by a sharp production cut by major original equipment manufacturers (OEMs) during the past four quarters. The decline could not get arrested by high-value LED products due to their stable share in the top line. 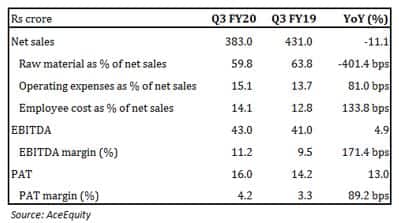 On the profitability front, the company surprised, with earnings before interest, tax, depreciation and amortisation (EBITDA) margin growing 171.4 bps from a year ago. The expansion came on the back of cost control measures, in-sourcing of electronic business from April 2019 (acquisition of Printed Circuit Board unit from Lumax Auto Tech) and soft raw material prices.

Why are we confident about Lumax?

The auto industry has been facing an unprecedented slowdown for the past almost four quarters. Factors contributing to this weakness include a liquidity crunch, the NBFC credit squeeze and an overall subdued consumer sentiment.  Additionally, the increased cost of ownership of vehicles due to insurance cost and implementation of safety regulations has hit demand. There are regulatory changes too, especially the transition from BS-IV to BS-VI, which have also suppressed demand.

However, we believe this slowdown is cyclical and the long-term potential for the auto sector in India is huge and strong demand is expected to come in from urban areas on the back of very low penetration and rising disposable incomes.

Further, the management indicated that OEMs have cleared their BS IV inventory from the supply chain, and now production should witness an uptick with the manufacturing of BS VI-compliant vehicles.

Despite significant weakness within the industry, Lumax continues to bag new orders. In the PV (passenger vehicle) segment, it got new orders from Tata Motors for supplying various components to multiple cars. It has also bagged orders from Maruti for multiple upcoming models. In the 2W (two-wheeler) segment, it bagged the order for M&M Jawa and Honda Shine SP125. Also, it secured the order for new Honda Active 6G.

These order wins amid tough conditions reinforce our confidence on the company and also provide earnings visibility.

Lumax’s efforts to rationalise cost through localisation and backward integration have started yielding results for the past three quarters, indicating the management’s focus and efforts towards cost reduction. The company has also earmarked Rs 75 crore in setting up an electronic facility to localise component manufacturing and product development to improve margin further.

In fact, the management indicated that it plans to reduce component import from 60 percent to 30 percent, which is expected to take the EBITDA margin to 12-13 percent levels in the next 2-3 years.

LED penetration in India is still very low (15-20 percent) and hence, there is a huge potential for the company both in terms of sales growth and margin expansion.  LEDs are high-value and high-margin products for the company and contribute around 32 percent of its sales. The management has set a target for LED sales to reach 50 percent of revenues eventually.

The Bharat Stage (BS) VI rules are set to be implemented by April 2020 and require vehicles to be more energy efficient, which is expected to lead to faster adoption of LEDs. The management expects huge growth from this transition. Lumax has already started supplying BS VI components to Hero’s first BS VI bike iSmart, Maruti’s S-Presso and TVS’ N Torq.

Additionally, the company’s products are unaffected by the upcoming electric vehicle (EV) disruption. In fact, EV adoption would lead to increasing adoption of LED products as the vehicles require products to be energy efficient. The weak demand outlook has caused the stock price to correct 25 percent from 52-week high, making valuations attractive. It currently trades at valuations of 11.3 times FY21 projected earnings. We advise investors to buy this strong business with an eye on the long term.