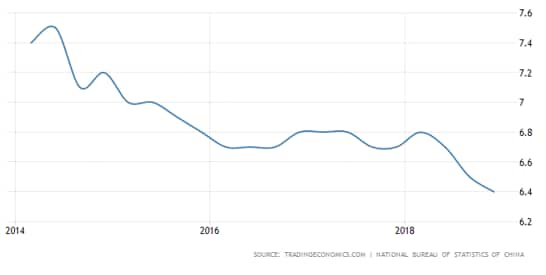 Fiscal stimulus: China has announced a sharp cut in Value Added Tax (VAT) across sectors. For the manufacturing sector, VAT would reduce to 13 percent from 16 percent. For the construction sector, this would reduce to 9 percent from 10 percent.  This reduction along with lower social insurance contributions from enterprises amounts to about 2 trillion yuan ($300 billion) reduction in tax collection. To meet the financing of key projects special bond issuance quota for local governments has been kept at 2.15 trillion yuan.

Now, this is not a new modus operandi for China to boost domestic consumption and look for special funding arrangements. Last year as well, it had reduced tax collection worth 1.3 trillion yuan and the delta in funding was partially managed through special bonds (worth 1.35 trillion yuan) by the local government. This is a part of ongoing local government debt reforms, wherein local authorities are expected to replace other forms of debts by issuing general bonds.

This time quantum relief on the fiscal side has surged significantly. Budget deficit is also kept at 2.8 percent of GDP –– higher than last year’s figure of 2.6 percent and hence reflects lower estimates for financing and higher impetus for infrastructure.

Monetary policy: Monetary policy would be used with an aim that money supply and total social financing is in line with the nominal GDP growth rate (about 9-9.5 percent). It would not resort to flooding of stimulus through the monetary policy route.

Deleveraging: China mentions that deleveraging efforts and shadow banking risks would be resolved in an orderly manner and balance would be maintained between economic growth and leveraging risks.

Other things which would come up later in the 10-day session include:

- The draft foreign investment law would be reviewed on March 8 and put to vote on March 15. It is understood that the draft legislation has some inputs from the ongoing US-China trade talks, particularly in areas such as intellectual property rights protection, technology transfer and higher market access

Takeaways:
China is increasingly resorting to fiscal tools to boost consumption. Earlier, there was news flow on personal tax cuts as well. This continues to convey enormity of the situation in China as has been reflected in the slowdown in domestic consumption.

There seems to be a pause in deleveraging efforts and the economy could re-leverage in 2019 after a decline in 2018. Statement from the China Banking and Insurance Regulatory Commission (CBIRC) underlined that deleveraging targets have been achieved and the leverage levels are expected to remain stable over the near term.

It’s noteworthy that leverage ratio (debt-to-GDP ratio) of China’s was 243.7 percent in 2018, with corporate leverage ratio at 153.6 percent. Recently, there has been a rising trend in leverage. Shadow financing increased for the first time in the last 11 months and inter-bank borrowing surged to a six-month high.

Further, there is also higher tolerance for a budget deficit.

The speed at which foreign investment legislation has been drafted and the omission of phrase 'Made in China 2025' appears to placate authorities in the US.

In terms of market reaction, local indices are trending positively today. The Shanghai Composite Index is up 24 percent from the January lows, with the anticipation for a breakthrough in trade talks and domestic stimulus. On the structural reforms front, steps meant for strengthening the government balance sheet (debt) appear to be on hold, though institutional reforms related to trade and investment are a priority. What remains to be seen is whether steps taken for the revival of domestic consumption are good enough. At the same time, pause in deleveraging means debt levels needs to tracked closely as the structural story on this count is still not over.