IDFC’s complex corporate structure with step-down subsidiaries has meant the process has been glacial. While a reverse merger with its parent may not be detrimental to IDFC First Bank, uncertainties surrounding the process need to be removed for the bank’s shares to perform.

Mergers are never simple or quick; reverse mergers are even more intricate. Uncertainty over the reverse merger with IDFC Ltd is keeping investors of IDFC First Bank Ltd on tenterhooks. That the uncertainty comes even as the bank is yet to fully gain investor confidence over its balance-sheet quality makes it a bigger challenge for valuation improvement.

The bank’s shares have been on a downhill path for the past year, and have chalked up a year-to-date loss of 19.78 percent. Its parent IDFC has fallen 9.32 percent. For perspective, the broader Nifty is down 3.21 percent in the same period and the Nifty Bank index has fallen by a smaller 1.13 percent.

The reverse merger of IDFC with IDFC First Bank is aimed at unlocking value for the former’s shareholders. As such, the exercise offers little benefit to the bank. In fact, the transaction needs to take care of the extent of dilution faced by existing shareholders of the bank. Analysts believe that a neutral swap ratio, wherein only the shareholding pattern changes, would be a favourable outcome. Even better would be a higher swap ratio where fresh capital is infused into the lender, strengthening its balance sheet.

IDFC owns IDFC First Bank and IDFC Asset Management Company Ltd through the non-operating financial holding company IDFC Financial Holdings Ltd. IDFC also holds IDFC Foundation (a section 8 company) through which it has joint ventures with two state governments. Besides these, IDFC also has three subsidiaries -- IDFC Projects Ltd, IDFC Alternatives Ltd and IDFC Trustee Company Ltd -- all of which are in the process of being amalgamated with the company.

In short, IDFC has no operating business and its primary income is dividends from its subsidiaries.

The bang for shareholders’ buck came from the bank and the fund house (sold to Bandhan Group earlier this year). It is evident that the bank’s shareholders have an upper hand. For now, the reverse merger has only brought uncertainty. IDFC’s complex corporate structure with step-down subsidiaries has meant the merger process has been glacial. 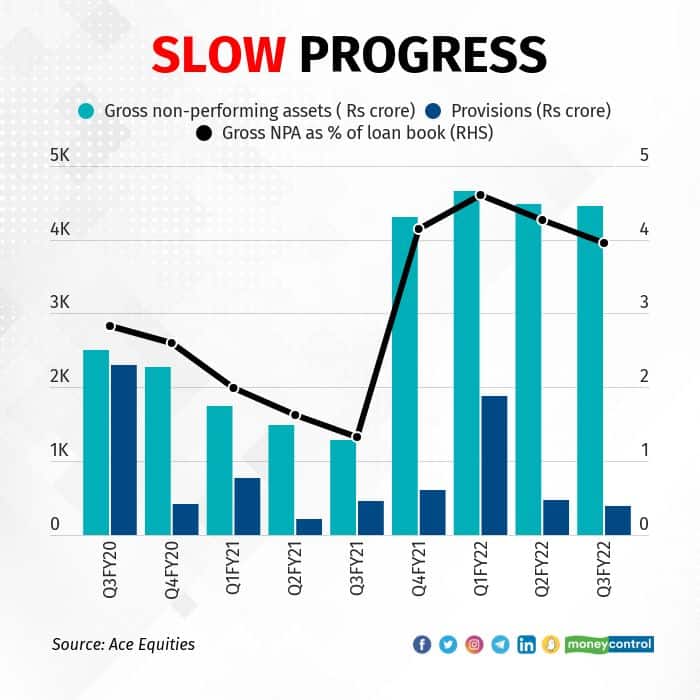 Ashutosh Mishra, the analyst at Ashika Stock Broking Ltd, points out that while the reverse merger may not be detrimental to the bank, the uncertainty surrounding it needs to go for the bank’s shares to perform.

“Investors need to see how it will pan out. What would be done with the infra debt fund that IDFC has etc?,” he said. Mishra too echoed other analysts on the criticality of the swap ratio. The brokerage has a buy rating on the bank’s stock.

Even as the bank is under the shadow of the merger, IDFC’s investors have had to deal with long delays. It hasn’t helped that the IDFC board wasn’t as enthusiastic about the deal as investors wanted it to be. Indeed, the company’s investors were promised that their value would be unlocked even before the merger of IDFC Bank and Capital First Ltd in 2018.

With a 75 percent erosion of value between 2017 and 2020, IDFC became a wealth destroyer for its investors.  The angst of investors was evident in an informal call with the management in September last year. One shareholder highlighted that the holding company discount has surged to 70 percent for IDFC. “What is the company doing to maximise shareholder value?” was the main question asked.

To be fair, much progress has been made towards a reverse merger since then. IDFC has set in motion an amalgamation of IDFC Alternatives, IDFC Trustee Company, and IDFC Projects. It sold IDFC AMC to Bandhan Group earlier this year. Necessary approvals from the boards of the bank, IDFC and the non-financial holding company, IDFC Financial Holdings, have been obtained for the reverse merger. But the joint ventures with two state governments are yet to be dealt with. Nevertheless, the progress has resulted in IDFC stock gaining 11 percent in the past one year. For the bank things haven’t changed, though.

If reverse merger is a cloud hanging over the stock, earnings performance is another cautioning tale.

Though the bank’s delinquencies were 4 percent of its loan book in the December quarter, fresh slippages were higher and a restructured loan pile of 2.5 percent was worrying. IDFC First Bank has adopted retail and small business-focused lending and these two segments are more than 65 percent of its total loan book.

“The business momentum is good for the bank but it is better to look at the sustainability of its asset quality. The bank’s buffer provisions are low compared with peers,” said an analyst requesting anonymity.

In the wake of the pandemic, banks have set aside provisions specifically towards COVID-10-related risks over and above the regular provisions required towards bad loans as per the rules. This buffer provision has helped lenders such as ICICI Bank Ltd, Federal Bank Ltd and Kotak Mahindra Bank Ltd navigate the pandemic’s risks deftly.

IDFC First Bank’s provisions are relatively low even when its book is tilted towards the more vulnerable categories of retail and small businesses. What’s more is that 2.6 percent of its loans to micro, small and medium enterprises have been restructured. Note that among like-sized peers, IDFC First Bank has one of the highest restructured loan piles. Peers like DCB Bank Ltd, RBL Bank, and Karur Vysya Bank have reported a sharper reduction in stress compared with IDFC First Bank.

This is visible in the stock movement of the lenders. Some such as Federal Bank have reported lower delinquencies. Notwithstanding the fall in its price, IDFC First Bank's share seem expensive versus peers. Its shares trade at 1.1 times the estimated book value for FY23 while that of Federal Bank, Karur Vysya Bank and DCB Bank trade below their book value.

Therefore, investors need consistent performance on asset quality. In an early update for the March quarter, IDFC First Bank said asset quality had returned to pre-pandemic levels.  Numerical proof of this would be available when the bank releases its fourth-quarter results on April 30. For now, investors are guarded against potential asset quality pressure points, especially due to the outsized impact of the pandemic on small business and retail loans. Confidence in asset quality trajectory and clarity on the reverse merger are two key factors that the bank needs to get in investors’ favour.