Use Modified Put Butterfly strategy on Nifty amid ongoing lull

Monday blues have become a pattern now. This week too started with a drop. The current super-sensitive scenario impacted by COVID-19 crisis kept the choppiness coming. However, the sequence of ups and downs left Nifty without any meaningful damage as the loss for the week was just over 2 percent. Bank Nifty, on the other hand, has always been amplifying the moves of Nifty. This week was no different, as the Bank Nifty too after passing through similar choppy path ended up with around 5 percent drop for the week.

On the open interest front, the futures on both the indices reacted opposite to the recent trend. Nifty has been in an unwinding mode ever since the May expiry started. However, this week we did see tiny bit of increment in participation. The change in OI still remained restricted to sub-5 percent every day despite the size of the moves. This along with a couple of unwinding sessions in between Nifty futures ended the week with more or less no change.

Bank Nifty futures, on the other hand, had a better week. At least till mid-week a whopping 16 percent short covering was observed but the late week weakness especially the last session drop raised short interest resulting in 11 percent of covered shorts to reinstate. This left Bank Nifty with around 5 percent covered shorts.

Stock futures had a better week than previous as a lot of bargain hunting attempts were made this week with Nifty holding the level of 9,000. This has resulted in Longs dominating the OI activity across stock futures. Almost half of the participating stocks added longs. The magnitude of incremental participation remained low. Even the short-covering activity was notably prominent as around 20 percent of participating stocks covered shorts. Slicing it down further, many sectors added long interest this week, Auto and Capital Goods were notable. Sectors like Media and Metal had mixed interests.

Sentimentally though, Nifty option composition tilted little more towards neutrality. OIPCR dropped this week to 1.12 this week, down by about 20bps leaving the 1.3 lower bound after many days. There was an attempt at recovery in sentiments but the weakness towards the end of the week brought it back down again.

India VIX, however, did not react much to the ups and downs as the choppiness could never result in a big move. This resistance to go up amid COVID-19 overhang at the same time comfort coming in at 9,000 could keep the market choppy as trading often yet small should be the strategy.

At this juncture, amid a lull in Nifty futures, last session shorts indicate an urge to create a hedge. Option composition has taken a dive for the first time in many days. Compression in open interest Put Call ratio (OIPCR) is a concern for the immediate term. Despite heavy built up and consensus support, a possibility of a deeper cut in case we fail to sustain 9,000 should not be ignored either. Amid such an ongoing lull, a slightly weaker tone is advised to be traded via inexpensive Modified Put Butterfly.

Modified Put Butterfly is a 4-legged strategy where 1 lot of Put close to current underlying level is bought against that 2 lots of lower strike Puts are sold and 1 more lot of Put is bought but closer to the Put sold strike. This keeps the lower but constant profits in case of downward breakout. This is a fairly risk-averse and a universal strategy. 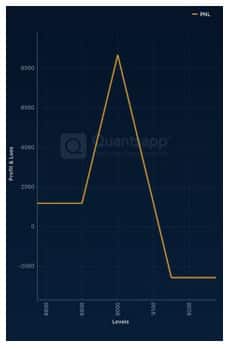 The author is CEO & Head of Research at Quantsapp Private Limited.