Trade Spotlight | What should you do with Pidilite Industries, Hindustan Unilever, HDFC on Tuesday?

On weekly chart of HDFC, we saw some sideways action post breakdown happened at Rs 2,400 levels with volume confirmation. Prices have been maintaining lower low, lower high formation. The downtrend was also preceded by Negative direction.

The market seems to be oversold and hence it snapped six-day losing streak with support from FMCG, and IT stocks and the HDFC twins on June 20. The BSE Sensex gained more than 200 points to close at 51,598, while the Nifty50 defended its Friday's low of 15,183 and rose 57 points to 15,350.

However, auto, metal, realty and select banks stocks remained under pressure. The broader markets also stayed under control of bears on weak breadth.

The Nifty Midcap 100 and Smallcap 100 indices fell 2.3 percent and 3.2 percent respectively as about six shares declined for every share rising on the NSE.

India VIX, the fear index that measures volatility in the market, fell by 1.51 percent to 22.41 levels, indicating that the market was volatile and in favour of bears.

Stocks that were in action and sharply outperformed frontline indices included Pidilite Industries, HUL and HDFC which were among top five gainers in the futures & options segment on Monday.

Here's what Vidnyan Sawant of GEPL Capital recommends investors should do with these stocks when the market resumes trading today:.

On longer term charts, Pidilite Industries was moving in a strong uptrend since March 2020. Post August 2021, the stock started to consolidate in a broader range while forming a topping Head and Shoulder pattern.

On the weekly charts, prices formed an Inverted Hammer candle pattern after retesting the neckline which again was followed by a faster retracement of the previous swing. Also the 13 weeks exponential moving average (EMA) which was acting as a strong support to prices has lost its validity and is acting as resistance.

On daily charts, the stock has been sustaining below its 200 days simple moving average (SMA) since last one month indicating negative sentiments of the stock.

The RSI indicator on weekly time frame is below 50 which indicated bearish tone in the stock. We advise traders and investors to exit the positions from Pidilite Industries. Upside resistance for the stock is placed at Rs 2,200 level. 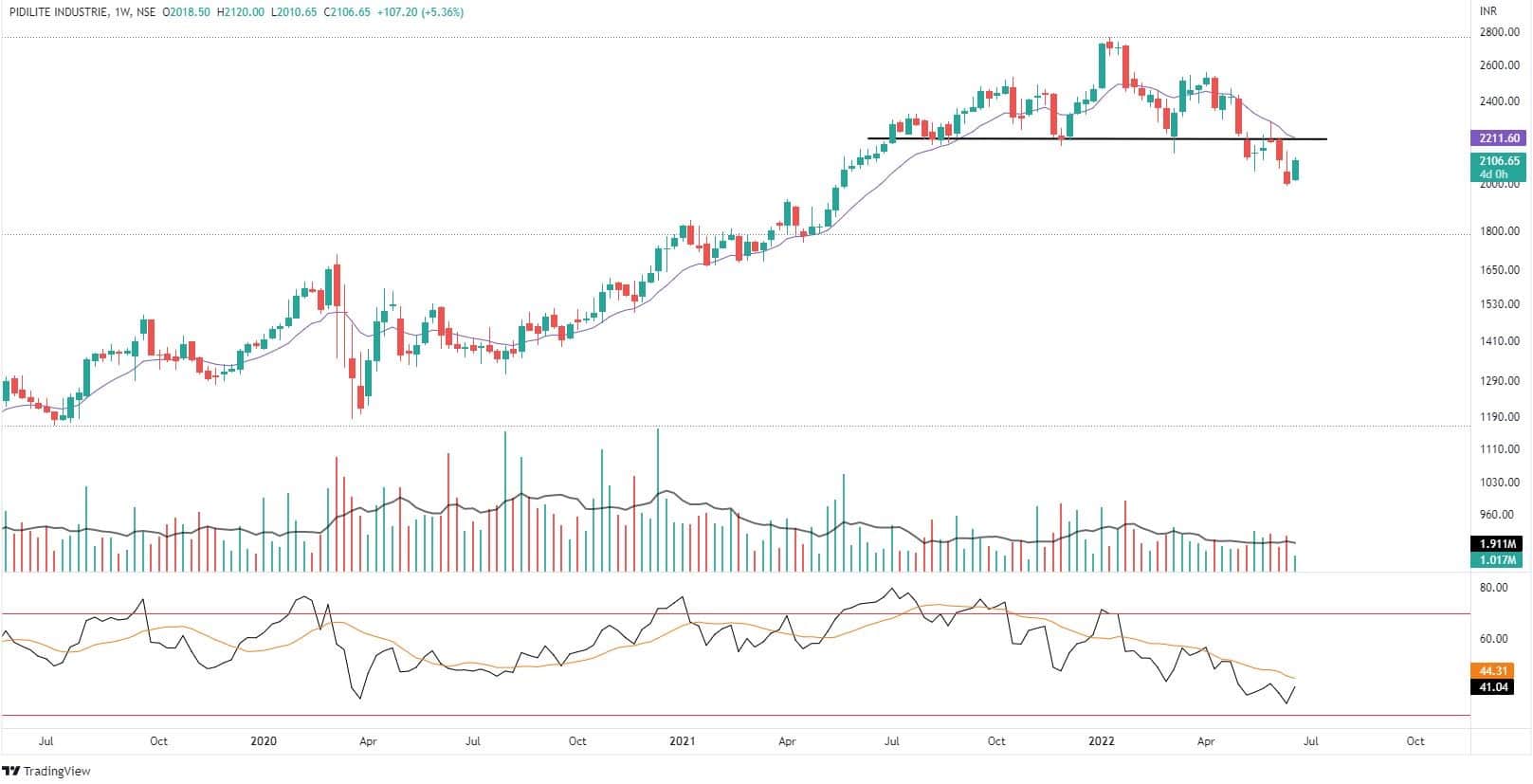 Hindustan Unilever has seen an exceptional uptrend since October 2018. The stock after such an elongated rally saw lower low formation, lower high formation since November 2021.

The stock on the weekly time frame broke the trend line which was respected very well since October 2018, and started acting as a resistance to the prices. We can also spot changes in the polarity of the prices.

On daily time, the stock has been taking strong resistance at 200 days SMA since November 2021. The RSI indicator is below 50 which shows bearish momentum.

The stock may show some pullback. We recommend to hold this with a strict stop-loss of Rs 1,900 mark. On weekly chart of HDFC, we saw some sideways action post breakdown happened at Rs 2,400 levels with volume confirmation. Prices have been maintaining lower low, lower high formation. The downtrend was also preceded by Negative direction.

In the previous week, the stock opened gap down and managed to sustain below the gap. The relative strength index (RSI) indicator is below 50 mark on higher time frame which suggest bearish tone for the stock.

We recommend trader and investors to stay away from HDFC till it sustains below Rs 2,400 mark. Rs 1,800 - 1,900 will act as a downside support for the counter. Level of Rs 2,400 would act as a strong resistance to the prices. Disclaimer: The views and investment tips expressed by investment experts on Moneycontrol.com are their own and not those of the website or its management. Moneycontrol.com advises users to check with certified experts before taking any investment decisions.
Sunil Shankar Matkar
Tags: #HDFC #Hindustan Unilever #Market Edge #Nifty #Pidilite Industries #Sensex #Stocks Views #Technicals #Trade Spotlight
first published: Jun 21, 2022 07:21 am