Trade Spotlight | What should you do with GNFC, PVR, Eicher Motors today?

Eicher Motors is in a consolidation phase as the prices have been oscillating within a broad channel. Until the stock surpasses above the resistance of the channel, one should avoid bottom fishing here and existing longs, too, can be lightened on pullback move towards the resistance zone.

The market extended losses for the third consecutive session and closed at a fresh two-month low on May 10, following weak trend in Asian counterparts. The BSE Sensex fell more than 100 points to 54,365, and the Nifty50 corrected over 60 points to 16,240, the lowest closing level since March 8.

The major loser in Tuesday's trade was Nifty Metal that plunged 5 percent, while the IT index was the second biggest loser, down 1 percent dragged by weakness in global tech stocks.

The broader space was heavily under selling pressure with the Nifty Midcap 100 and Smallcap 100 indices declining around 2 percent each. More than four shares declined for every share rising on the NSE.

The volatility also remained on the higher side, holding above the crucial 22 levels, indicating volatile swings in the market going ahead. India VIX was up 1.22 percent at 22.3 levels.

Stocks that were in focus include Gujarat Narmada Valley Fertilizers & Chemicals (GNFC), PVR, and Eicher Motors which were the biggest gainers in the futures & options space.

Here's what Ruchit Jain of 5paisa.com, recommends investors should do with these stocks when the market resumes trading today:

We saw a sharp run-up in the stock in March. After consolidation in April, it resumed the positive momentum in Tuesday's session, supported by high volumes.

Also, the volumes in the previous up-moves were good while that in consolidation phase were low. Traders with exiting long positions can continue to hold with a stop-loss placed below the swing low of Rs 750, but fresh buying is not recommended here as the risk reward ratio is not favourable.

The immediate supports for the stock are placed around Rs 777 and Rs 752 while resistances are seen around Rs 870 and Rs 900. 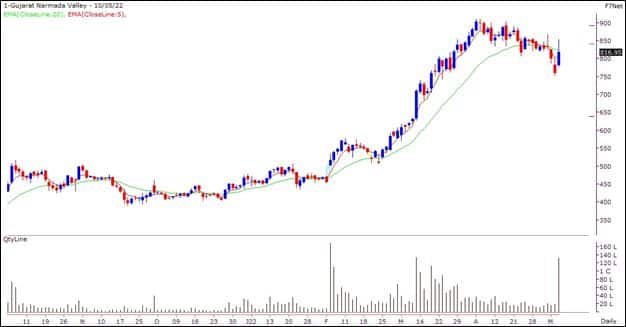 The stock has been trading in a Rising Channel and prices have taken a support near the support end of the channel. This week's low of Rs 1,673 could thus be a make or break level for the stock in the near term.

Traders with exiting positions can continue to hold the stock with a stop-loss placed below Rs 1,673. On the flipside, the immediate resistances are seen around Rs 1,855 and Rs 1,950. 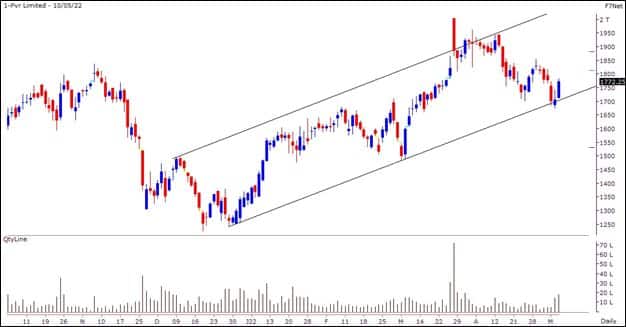 The stock is in a consolidation phase as the prices have been oscillating within a broad channel. Until the stock surpasses above the resistance of the channel, one should avoid bottom fishing here and existing longs, too, can be lightened on pullback move towards the resistance zone. Disclaimer: The views and investment tips expressed by investment experts on Moneycontrol.com are their own and not those of the website or its management. Moneycontrol.com advises users to check with certified experts before taking any investment decisions.
Sunil Shankar Matkar
Tags: #Eicher Motors #Market Edge #PVR #Stocks Views #Technicals #Trade Spotlight
first published: May 11, 2022 07:10 am