Investing illusions can continue for a surprisingly long time. Wall Street loves the fees that deal-making generates, and the press loves the stories that colourful promoters provide, says Warren Buffett in the letter.

The COVID-19 pandemic might have hurt the earnings of Warren Buffett’s Berkshire Hathaway, but it did not dampen the spirit of investing.

In the letter to shareholders, the Oracle of Omaha highlighted how he was wrong about PCC, investors are a treasure, buyback, never to bet against America, and how bonds might be losing sheen.

Here is a list of takeaways which we have collated from Warren Buffett’s letter to shareholders:

Berkshire earned $42.5 billion in 2020 according to generally accepted accounting principles. The four components of that figure are $21.9 billion of operating earnings, $4.9 billion of realised capital gains, a $26.7 billion gain from an increase in the amount of net unrealised capital gains that exist in the stocks held, and, finally, an $11 billion loss from a write-down in the value of a few subsidiaries and affiliate businesses that we own. All items are stated on an after-tax basis.

One big trait of legends is that they are not afraid to call themselves wrong. Warren Buffett is one of them. In the letter to shareholders, Buffett said he was simply too optimistic about PCC’s normalised profit potential.

“Last year, my miscalculation was laid bare by adverse developments throughout the aerospace industry, PCC’s most important source of customers,” he said.

“I believe I was right in concluding that PCC would, over time, earn good returns on the net tangible assets deployed in its operations. I was wrong, however, in judging the average amount of future earnings and, consequently, wrong in my calculation of the proper price to pay for the business. PCC is far from my first error of that sort. But it’s a big one,” added the letter.

Warren Buffett in the letter to shareholders highlighted that despite some severe interruptions, the country’s economic progress has been breathtaking

“Beyond that, we retain our constitutional aspiration of becoming “a more perfect union.” Progress on that front has been slow, uneven, and often discouraging. We have, however, moved forward and will continue to do so. Our unwavering conclusion: Never bet against America,” the letter added.

The letter highlighted 15 common stock investments in the Berkshire portfolio that at yearend were the largest in market value. 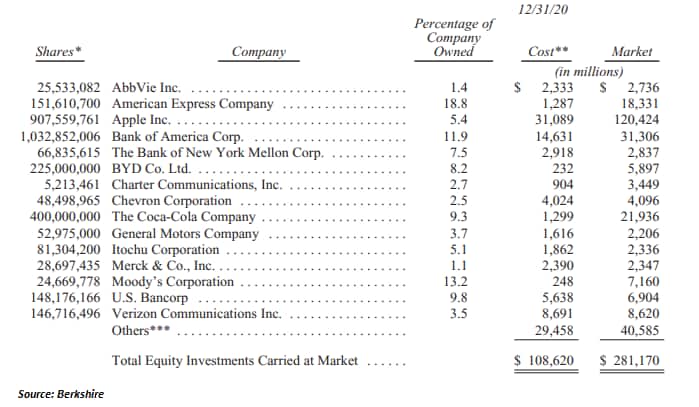 Illusion is not reality:

Investing illusions can continue for a surprisingly long time. Wall Street loves the fees that deal-making generates, and the press loves the stories that colorful promoters provide.

At a point, also, the soaring price of a promoted stock can itself become the “proof” that an illusion is a reality. Eventually, of course, the party ends, and many business “emperors” are found to have no clothes.

Financial history is replete with the names of famous conglomerateurs who were initially lionized as business geniuses by journalists, analysts and investment bankers, but whose creations ended up as business junkyards.

Bonds are not the place to be these days:

Buffett in the letter highlighted that bonds are not the place to be these days. The income recently available from a 10-year U.S. Treasury bond – the yield was 0.93 percent at yearend – had fallen 94 percent from the 15.8 percent yield available in September 1981.

In certain large and important countries, such as Germany and Japan, investors earn a negative return on trillions of dollars of sovereign debt.

The letter highlighted that this year's meeting will be held in Los Angeles, and Vice Chairman Charlie Munger, will be on stage with Warren Buffett offering answers and observations throughout the 31⁄2-hour question period.

The other invaluable vice-chairmen, Ajit Jain and Greg Abel, will be also on stage to answer questions relating to their domains.

Berkshire repurchased about $9 billion of stock in the quarter, a sign Buffett considers his Omaha, Nebraska-based conglomerate undervalued, said a Reuters report.

For all of 2020, Berkshire said it bought back $24.7 billion of its own stock, topping its old record $5 billion in 2019.Warren Buffett highlighted that “we made those purchases because we believed they would both enhance the intrinsic value per share for continuing shareholders and would leave Berkshire with more than ample funds for any opportunities or problems it might encounter,” the letter quoted.

Berkshire ended 2020 with $138.3 billion of cash on the books. Berkshire made no sizable acquisitions and operating earnings fell 9 percent. “We did, though, increase Berkshire’s per-share intrinsic value by both retaining earnings and repurchasing about 5% of our shares,” the letter said.

Ownership of stocks is very much a “positive-sum” game:

Warren Buffett highlighted the million-plus individual investors in the letter who simply trust the company to represent their interests, whatever the future may bring.

“Investors have joined us with no intent to leave, adopting a mindset similar to that held by our original partners. Indeed, many investors from our partnership years, and/or their descendants, remain substantial owners of Berkshire,” the letter highlighted.

“Ownership of stocks is very much a “positive-sum” game. We cherish the clientele this fare has attracted. The tens of millions of other investors and speculators in the United States and elsewhere have a wide variety of equity choices to fit their tastes,” it said.