"The truncated week witnessed some cool-off in the index as market participants looked to lighten up their positions ahead of the long weekend. The index ended below 17,500 mark with a weekly loss of 1.74 percent," said Ruchit Jain, Lead Research, 5paisa.com.

"During this corrective phase, the midcap space initially showed relative outperformance as the broader markets continued to witness good buying interest, however, the Nifty midcap index witnessed some profit booking in last couple of sessions ahead of the long weekend," Jain said.

In this recent upmove, the 20-DEMA has acted as a good support and the market closed just around this pivot point, he said.

"The Nifty 50 closed the week on a negative note taking cues from global indices and has closed just around its immediate support level of 17,450. On a weekly chart, the index has formed an evening star candlestick pattern, indicating bearishness," said Yesha Shah, Head of Equity Research, Samco Securities.

A decisive fall below 17,450 can lead to a retest of 16,900 zone, Shah said. “Thus, traders should maintain a mild bearish outlook going into the next week. A move above the immediate resistance level of 17,850 can negate the bearish outlook," Shah added.

A good week for some midcaps 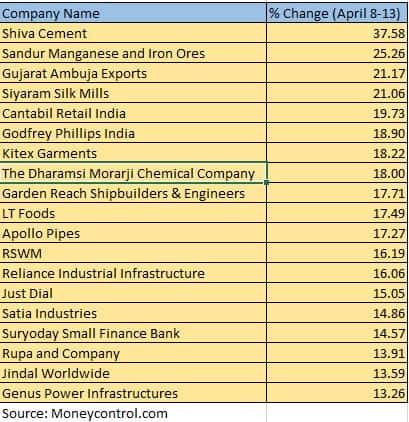 "It was certainly a bit challenging week for our markets and obviously, due to such a long gap, market participants chose to take some money off the table and did not carry over aggressive trades. Now if we take a glance at the daily time frame chart, we can see Nifty placed at a crucial juncture," said Sameet Chavan, Chief Analyst-Technical and Derivatives, Angel One.

“Firstly, the sacrosanct support of ’20-day EMA’ is positioned at 17,450 which coincides with the breakout point of the previous congestion zone. Hence till the time, Nifty is holding 17400 – 17200, we remain a bit hopeful of some recovery here."

If there are no aberrations on the global front in the coming days, any favourable cue would certainly be a cherry on the cake. On the upside, 17,700 followed by 17,850 are the levels to watch out for. If the Nifty has to regain any strength, it needs to surpass these barriers with some authority, he added.

“Let’s see how things pan out and in our sense, if the benchmark has to move higher from here, the banking needs to take the charge (which we are assuming on this occasion). The Bank Nifty is placed at its rock-solid support of 37,000–36,800,” Chavan said.

A move beyond 38000 would provide the impetus for the next leg of the rally. Though the broader market underwent some profit-booking in the last couple of days, smaller names are expected to outperform going forward, Chavan said.

The markets will react to two major earnings—Infosys and HDFC Bank on April 18. Besides, any major development on the global front in the next four days would also impact the sentiment.

On the index front, the Nifty is respecting the first line of defence, which is the 20-EMA on the daily chart at around 17,400 and its breakdown can push the index to 17,250.

In case of a rebound, the 17,650-17,750 zone would act as the immediate hurdle. We suggest hedged bets and focus on stock selection.

Technically, weakness in the market will continue till the Nifty trades below the 17,421-mark. Technically, the make-or-break Nifty support is seen at its 200-DMA at the 17,159 mark. Intraday support at 17,427. Caution will again be the buzzword. Investors should look only for value investing with a long-term perspective.

Q4FY22 result season has started with TCS number being in line with expectation. The market will on April 18 also react to index heavyweights Infosys and HDFC Bank’s numbers.

Next week’s opening would depend on the global market movement and if the Nifty manages to start the week on a positive note, then the 20-EMA could become a strong support.

From a broader perspective, the index may see a time- wise correction in the second half of the April series with more opportunities in sector or stock-specific momentum.

For the coming week, traders should focus on stock- specific trades where better opportunities are seen. “Monday’s move could set the momentum for the short term, " he said.

Disclaimer: The views and investment tips expressed by experts on Moneycontrol.com are their own and not those of the website or its management. Moneycontrol.com advises users to check with certified experts before taking any investment decisions.
Rakesh Patil
Tags: #Market Cues #Market Edge #Nifty #Sensex
first published: Apr 16, 2022 11:21 am