The derivative data indicated that Put writers look confident and have a strong belief that Nifty won't fall below 17,000 before the expiry while the upside is open up to 17,500 level, says Santosh Meena of Swastika Investmart

The Nifty50 is continuing the Santa rally, however, 17,250 is an immediate and important hurdle that the index has to cross for further move towards 100-DMA (daily moving average) which is placed at 17,400, while 17,500/17,600 will be the next resistance levels.

On the downside, 20-DMA of 17,150 will act as an immediate support level, while 17,000 will be the next important support level. The bias looks positive where it will be interesting to see whether bulls manage to take the Nifty above 17,250 or not.

If we look at the derivative data then Put writers look confident and have a strong belief that the Nifty won’t fall below 17,000 before the expiry, while the upside is open up to 17,500 level. Put writers have become active in 17,200-17,100 territory, therefore 17,200-17,100 area will act as an immediate support zone.

The counter is coming out of a long consolidation with a breakout of symmetrical triangle formation and strong volumes justify the breakout. The overall structure is very bullish as it trades above its all-important moving averages.

The pattern suggests an immediate target of Rs 205, while it has the potential to move further upside. On the downside, the previous breakout level of Rs 160 will act as an immediate support level, while the cluster of moving averages around Rs 140 is critical support at any weakness. The counter is in a classical uptrend where it took support at its 200-DMA after a meaningful correction and then witnessed a smart recovery. It is witnessing a breakout of falling channel formation to resume its uptrend.

It is in the process to form a bullish inverse head-and-shoulder formation where Rs 300 will be the neckline resistance. Above this, we can expect a strong bullish momentum for an immediate target of Rs 320.

On the downside, Rs 275-270 is a strong support area. MACD is trading above centreline, whereas RSI is witnessing positive crossover after taking support at 40 mark. 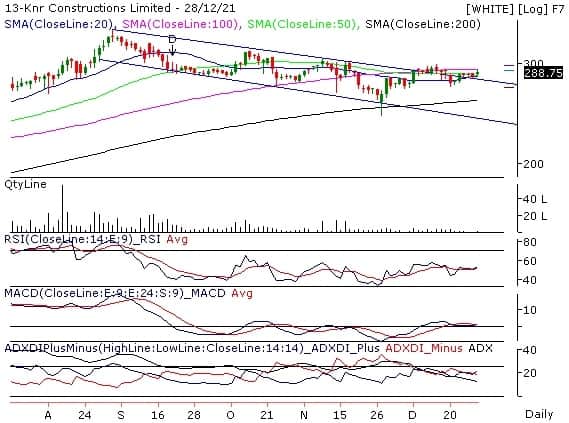 The counter is in strong bullish momentum and resuming this momentum following a breakout of bullish flag formation with heavy volume. It also manages to close above upsloping trendline resistance that gives it further thrust to move higher.

On the downside, a breakout level of Rs 440 will act as an immediate base, while Rs 380 is major support at any correction. Disclaimer: The views and investment tips expressed by investment experts on Moneycontrol.com are their own and not those of the website or its management. Moneycontrol.com advises users to check with certified experts before taking any investment decisions.
Tags: #D-Link India #Hot Stocks #Hot Stocks Podcast #KNR Constructions #Nifty #NIIT #Podcast #Sensex #Stocks Views #Technicals
first published: Dec 29, 2021 07:37 am