In the last quarter, DII holding went up in 322 companies listed on NSE, and the average stock price of these companies in the same period increased by 10.83 percent.

The aggregate shareholding of domestic institutional investors (DIIs) in NSE companies has fallen to a 10-quarter low in the three-month period ending March 2021, largely due to a decline in shareholdings of mutual funds and insurance companies.

In the March quarter, DII holding decreased to 13.03 percent from 13.56 percent Q3 FY21, data collected by primeinfobase.com, an initiative of PRIME Database Group, showed. Their holding had last fallen below 13 percent mark in the quarter ended June 2018.

Considering only free float (non-promoter holding), DII ownership by value percentage went down to 26.30 percent in the quarter ending March 2021 from 26.87 percent in Q3 FY21.

In terms of ownership by the number of shares (average holding as a percentage of total share capital across all NSE listed companies) DII ownership went down to 5.89 percent as on March 31, 2021 from 5.96 percent on December 31, 2020. 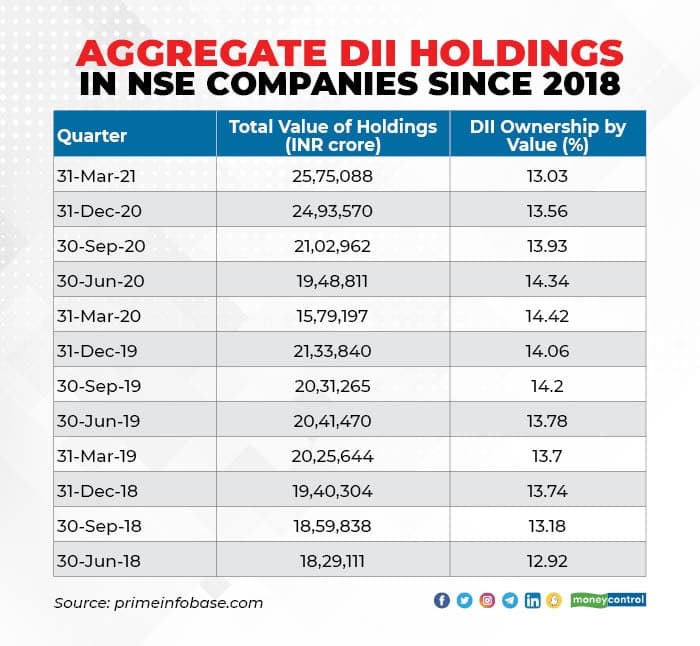 Pranav Haldea, Managing Director, PRIME Database Group said: "Holding of insurance companies as a whole declined to a 5-year low of 4.80 percent as on March 31, 2021 down from 5 percent as on December 31, 2020. And holding of domestic mutual funds in companies listed on NSE also reduced to 7.23 percent, from 7.42 percent in the same periods."

Overall DIIs have net sold Rs 23,124 crore worth of shares in the cash segment during the March quarter, much lower compared to outflow of Rs 1,02,931.14 crore in the previous quarter.

In the same timeframe, benchmark indices Sensex and Nifty rose by 3.70 and 5.10 percent, respectively.

Gap between FPI and DII holding Overall, in the last quarter, DII holding went up in 322 companies listed on NSE, and the average stock price of these companies in the same period increased by 10.83 percent.

On the other hand, DII holding went down in 559 companies listed on NSE. Interestingly, the average stock price of these companies in the same period increased by 15.35 percent.