We look for companies having positive Operating Cash Flow (OCF) in at least 7 out of the last 10 years, unlike profit numbers OCF does not take into account one-time transactions that can inflate the profit numbers.

In an interview with Moneycontrol's Kshitij Anand, Agarwal said that Nifty is trading at a one-year forward P/E 21.6x -  31% higher than the 10-year average. In the last 16 years, 98% of the time, Nifty has traded at a lower current valuation; hence, valuations are definitely high.

Q) What a month it has been for markets? Fresh record highs, which was followed by some volatility in the broader market space, and then again we found some stability. How is the market looking according to you?

In a record low rate and high liquidity environment, economic recovery along with revival of corporate earnings growth bodes well for equity as an asset class.

Q) Well, Jim Rogers has warned of a bubble in the debt market space across the globe, and the warning was stretched to stocks as well. What are your views – is the market in a bubble zone and the hope-based rally could take a knock?

Agarwal: The global pile of negative-yielding debt has grown to more than $16tn, as a relentless global bond rally drags borrowing costs below zero.

In the US, the headline inflation is staying above 5% for the last few months (Even 2-yr CAGR basis is highest since Nov’08). While the US Fed has maintained an accommodative stance by maintaining rates and asset-buying programs, discussions around a Fed taper are intensifying. This could put pressure on global equity valuations.

Wholesale Inflation in India was 11.2% in July’21 – 5th straight month of double-digit inflation – for the first time in 13 years. But, the Repo rate is at all time low.

As long as we are in rising liquidity and low rate phase, the valuations can remain elevated and markets can remain buoyant for much longer than many think.

Q) What are your views on the EV space which seems to be getting all the attention? Many companies are coming out with CAPEX plans on developing EV or switching to clean energy?

Agarwal: It is becoming increasingly clear that electric vehicles is the future, but it will take a long time. In FY21, less than 0.2% of passenger vehicles sold in India, were EVs. The number was ~1% for two-wheelers.

It is interesting to note that Mrs Clara Ford, wife of Mr Henry Ford, whose Model T all but decimated the electric car, drove an electric car. She did not like internal combustion engines and insisted that electric vehicles were the future. She was over a 100 years too soon.

There are various subsidies from the Government to reach its vision of EVs constituting 30% of the overall vehicles on road in India by 2030. Multiple OEMs have announced capex plans for EV.

Q) Small & midcaps have gone up 3-4x from the lows. Do you think this euphoric rally has stretched beyond the limit? When could the music stop?

As of Jul’21 end, on 2-yr CAGR basis, Nifty Small Cap has beaten Nifty by 19%. Historically, only 8% of the months had 2-yr CAGR outperformance of over 19%, with median 2-yr outperformance being 0.

Retail participation in India is rising at an increasing pace. More than half of current active accounts in the country have been opened in the ongoing bull run since Mar’20 – with most of them being first-time investors and hence having no experience of seeing a meaningful correction.

Given the historical move, limited scope for earnings surprises, the rising debate around easy money, the risk-reward ratio is increasingly shifting in favour of large caps.

Q) What is your investment mantra or your checklist before buying a stock?

Agarwal: We are essentially growth investors. We believe in paying a reasonable price for sustainable earnings growth potential, coupled with efficient usage of capital and demonstrated corporate governance. Historical data of over 2 decades across multiple countries shows that the highest quintile of earnings growth has outperformed over the long run.

We look for companies having positive Operating Cash Flow (OCF) in at least 7 out of the last 10 years, unlike profit numbers OCF does not take into account one-time transactions that can inflate the profit numbers.

Capital for any business is always limited/finite. There is a cost associated with this capital, whatever be the combination of debt and equity.

A company can add economic value (and thereby create shareholder wealth) only if its return on that capital is in excess of the cost. Hence, we prefer efficient users of capital.

We prefer companies with strong absolute and relative growth, which gets reflected in the market share gains enjoyed by the company.

Someone has rightly said the investing is as much an art as much a science – there of plenty of subjective area to check as well.

Q) What is your take on current Nifty valuations? Are we trading at a premium and how do we stack up against our emerging markets peers as well as developed markets?

Agarwal: Nifty is trading at one-year forward P/E 21.6x -  31% higher than the 10-year average. In the last 16 years, 98% of the time, Nifty has traded at a lower current valuation. Valuations are definitely high. 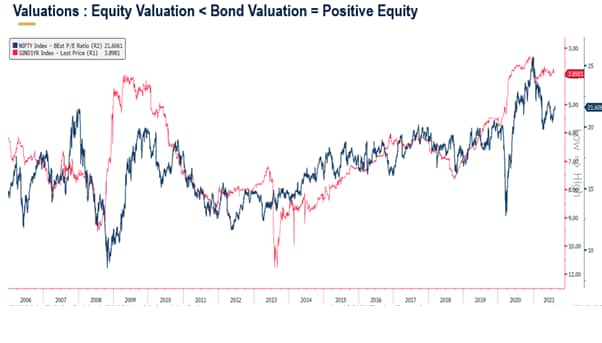 On a 1-year forward P/E basis, Nifty is trading at 68% premium to MSCI Emerging Markets Index (highest premium in last 14 years and 22% higher than 15-year average) and 1% premium to S&P 500 Index (significantly below highs of 41% premium).

US market cap to GDP is at 204%. Hence, India is quite expensive within EMs, but much cheaper than developed markets, especially US.

Q) The IPO euphoria is only getting bigger by the day. How do you sum up the action? What is the kind of fund raising you foresee for the rest of 2021?

Going by issues files with SEBI or companies showing intent to list, this number can easily cross Rs 1 trillion by December.

Besides traditional businesses, the listing of one of India’s largest food delivery app has kicked off a flurry of stock market debuts by Indian start-ups that hope crackdowns on Chinese technology groups could prompt global investors to turn their attention to India’s tech offerings.

Signs of overheating are visible with demand for IPOs outstripping supply by a huge margin, despite these companies being in losses and not guiding for profits any time soon. The FOMO factor seems to be extremely strong currently.

We are concerned about the clear frenzy in the IPO markets, despite lofty valuations in most cases and few of them being loss-making companies.

Q) Any pocket or sector which you think could come under pressure in the near future and why?

Agarwal: We are Underweight in Auto Sector. They first got impacted by the pandemic which had a big impact on volumes. Their already not-so-high margins got challenged by rising commodity prices.

Then, the sector started witnessing a shortage of key chips/semiconductors. Companies have come out with profit warnings and production cuts as well.

Further, traditional ICE engine companies are facing stiff competition from new-age EV makers, forcing them to do capex on EV too. Earnings growth visibility of the sector has reduced.

Q) The much-talked-about $1 trillion infrastructure bill got approval from the US Senate. Which sectors could benefit from the move?

Agarwal: It may not benefit Indian companies directly, however, it would help Industrial companies having exports to developed economies particularly in the Industrial consumable and equipment space. MNCs and their Indian affiliates could be better placed to benefit from the same.

In the past we have seen, other consumables companies such as wires and cables, electrical equipment and small industrial equipment segments to benefit in the event of mega infrastructure spends in parts of the world.
Disclaimer: The views and investment tips expressed by experts on Moneycontrol.com are their own and not those of the website or its management. Moneycontrol.com advises users to check with certified experts before taking any investment decisions.