Broader market underperforms, but these 34 small-cap stocks rose 10-30% in a week

There are as many as 34 stocks in the S&P BSE Smallcap index which bucked the trend and rose 10-30 percent in a week that include names like Alok Industries, Subex etc.

Resurfacing of the United States-China trade war, disappointing reaction to the government stimulus measures and a rate by the Reserve Bank of India (RBI) wiped out gains which had pushed benchmark indices below crucial support levels.

There are as many as 34 stocks in the S&P BSE Small-cap index which bucked the trend and rose 10-30 percent in a week that include names like Alok Industries, Subex, Astec Lifesciences, Zen Technologies, and Sintex Industries etc. among others. 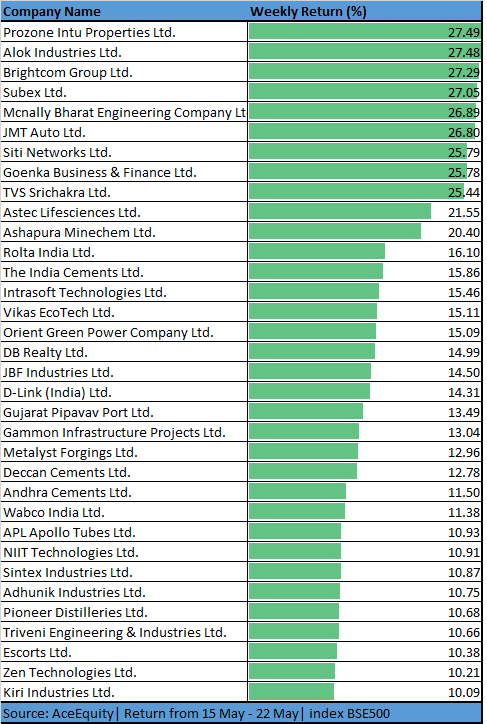 Nifty bounced back from the lows of 8,800 in the week gone by but the constant pressure on the financial which were the worst hit among the sectors capped the upside. The NiftyBank fell more than 8 percent in the week gone.

Financials remained under pressure due to the economic package unveiled by Finance Minister Nirmala Sitharaman which is likely to increase the strain on the balance sheet of banks, and the extension of the moratorium period also failed to lift sentiment.

“After a volatile week, RBI announced a surprise cut of 0.4 percent which was expected by the Street. The disappointment came as there was no mention of restructuring of loans and other supportive measures for banks,” Umesh Mehta, Head of Research, Samco Securities told Moneycontrol.

“The extension of the moratorium will bring about a fresh bout of non-performing asset (NPA) cycle if not from this quarter then sometime down the line. This will affect the bank’s balance sheet and in turn their profitability,” he said.

The Nifty50 closed in the red for the third consecutive week amid a rise in the volatility. The Nifty50 concluded the week below 9,100. The broader market relatively underperformed the benchmark as Nifty Mid-cap, Small-cap lost over 2 percent, each.

Sectorally, pharma, IT and FMCG outperformed while financials underperformed. The weekly price action resembles a ‘Hammer’ like candle, indicating supportive efforts emerged from 61.8 percent retracement of the April 2020 up move (8055-9890) at 8756, on expected lines.

Experts are of the view that the Nifty50 is likely to trade in a range in the upcoming truncated week. The crucial support is placed at 8,800 while on the upside the next target is placed at 9,300.

“Despite Monday’s (May 18) sharp decline index managed to hold key support threshold of 8800 throughout the week and forming a higher base at 8,800,” Dharmesh Shah, Head – Technical, ICICI direct told Moneycontrol.

“In the upcoming truncated week, we expect the index to consolidate in the broader range of 8,800-9,300 amid stock-specific action as result season progresses,” he said.

Shah further added that any dip from here on should be capitalised as an incremental buying opportunity as we believe, Nifty has strong support at 8800 levels being the confluence of the lower band of the current consolidation and 61.8 percent retracement of the entire April 2020 up move (8,055-9,890).