Made in India, flying all over the world

With global aircraft manufacturers including Boeing and Airbus looking to Indian companies for components, there is a bit of India in many commercial and defence planes crisscrossing the world.

Dynamatic Technologies (above), Aequs and Mahindra Aerostructures, among other large and small Indian companies, are supplying components to global aircraft manufacturers like Boeing and Airbus.

At the age of seven, Udyant Malhoutra’s passion for aeromodelling led him to build fairly complex aero models. Today, he is the CEO and Managing Director of Dynamatic Technologies, one of the main suppliers of complex aeronautical parts, structures and designs for Boeing, Airbus and Bell Helicopter.

Like Dynamatic Technologies, Karnataka-based Aequs is a key supplier of parts used in commercial aircraft worldwide. “There is some part made in Belagavi (where the company's plant is located) in almost every commercial aircraft across the world,” says Aravind Melligeri, Chairman and CEO of Aequs.

Mahindra Aerostructures, too, produces parts for all commercial aircraft produced by Boeing and Airbus.

Today, Dynamatic Tech, Aequs, the Tatas, Mahindras and many other large and small companies have made India a sought-after location for the supply of aircraft components by global manufacturers.

It’s a big business that is growing bigger by the day. While Boeing’s sourcing from India is worth approximately $1 billion today, the country’s contribution to Airbus’s global products through procurement of both components and services is worth more than $650 million annually.

A bit of India in every plane

“From an engineering and manufacturing standpoint, Boeing’s India operations and our 275 partners in the country contribute to every Boeing commercial airplane worldwide and Boeing defence airplanes in India,” says Salil Gupte, President, Boeing India.

Echoing him, Rémi Maillard, President and Managing Director of Airbus India and South Asia, says that every commercial aircraft or helicopter that Airbus manufactures today has parts, design or technology from India. “We not only support 7,000 jobs but are also constantly increasing India’s contribution to our global products through procurement of both components and services from more than 45 Indian suppliers,” says Maillard.

Arvind Mehra, Executive Director and CEO of Mahindra Aerospace, and MD and CEO of Mahindra Aerostructures, says the Group entered the aerospace business in 2009 motivated by growing opportunities for new suppliers in the global aerostructures industry. “From inception, the intention was to support multiple OEMs and their suppliers. Our facility was intended to be platform-agnostic and not depend on offsets,” he explains.

Dynamatic Technologies is a Tier 1 supplier for the assembly of Flap Track Beams (FTBs) for the Airbus 330 family of aircraft. FTBs are instruments that control the speed, direction and balance of an aircraft. “Dynamatic Technologies has also partnered with Airbus’ Tier-1 supplier Spirit Aerosystems for the assembly of FTBs for the A320 family,” says Maillard.

Belagavi-based Aequs Aerospace is India’s first vertically integrated aerospace manufacturing ecosystem. It is the largest supplier from India, providing machined parts, forgings and aerostructures both as a Tier 1 and Tier 2 supplier to Airbus.

Tata Boeing Aerospace Limited (TBAL), based in Hyderabad, produces 777 uplock boxes, which are metallic structures that house the landing gear in retraction, as well as 777 vertical fins, which are structures designed to reduce aerodynamic side slips and provide direction stability.

In addition, there are hundreds of MSMEs involved in making aircraft parts such as winglets.

Not an easy journey

These companies are doing well now but their journey has not been an easy one. Traditionally, India has not been perceived as an aerospace technology hub, so there were questions over whether its industry would be up to the task of producing critical parts that ensure planes stay in the air. “In 2015, when we were approaching a global client for aerospace, the first question we were asked was whether we knew about SAP,” a major supplier of aircraft materials recalls.

The raw material to make parts has to be imported and that can still be a challenge. Moreover, foreign engineers need visas to enter India and work in the factories set up here.

Mahindra’s Mehra points out that this is a long-gestation industry—it can take several months for a project to be awarded and for deliveries to start. “Production volumes can fluctuate. Another challenge could be source-controlled parts, hence material planning is a key requirement and people with the required skillsets are another key,” he says.

Indeed, one of the biggest challenges is the shortage of trained manpower. Dynamatic Tech is tackling this to a small extent by training young artisans from villages in the Bangalore Rural District. They are trained in aircraft manufacturing at the Dynamatic-Government of Karnataka Industrial Training Institute (ITI) in Devanahalli, where the city’s airport is located.

“Apart from harnessing incredible artisanal skills to grow our enterprise, this is also socially and economically transformational. These individuals usually come from poorer landless families, but with their newly acquired talent, they become a part of the global labour force,” says Malhoutra.

“We are creating sustainable jobs on both sides (in India and abroad) every time Airbus or Boeing gives us a contract. And the pie is getting bigger; an economically vibrant India is buying aircraft at a frenetic pace, growing the volume of aircraft required annually,” Malhoutra adds. 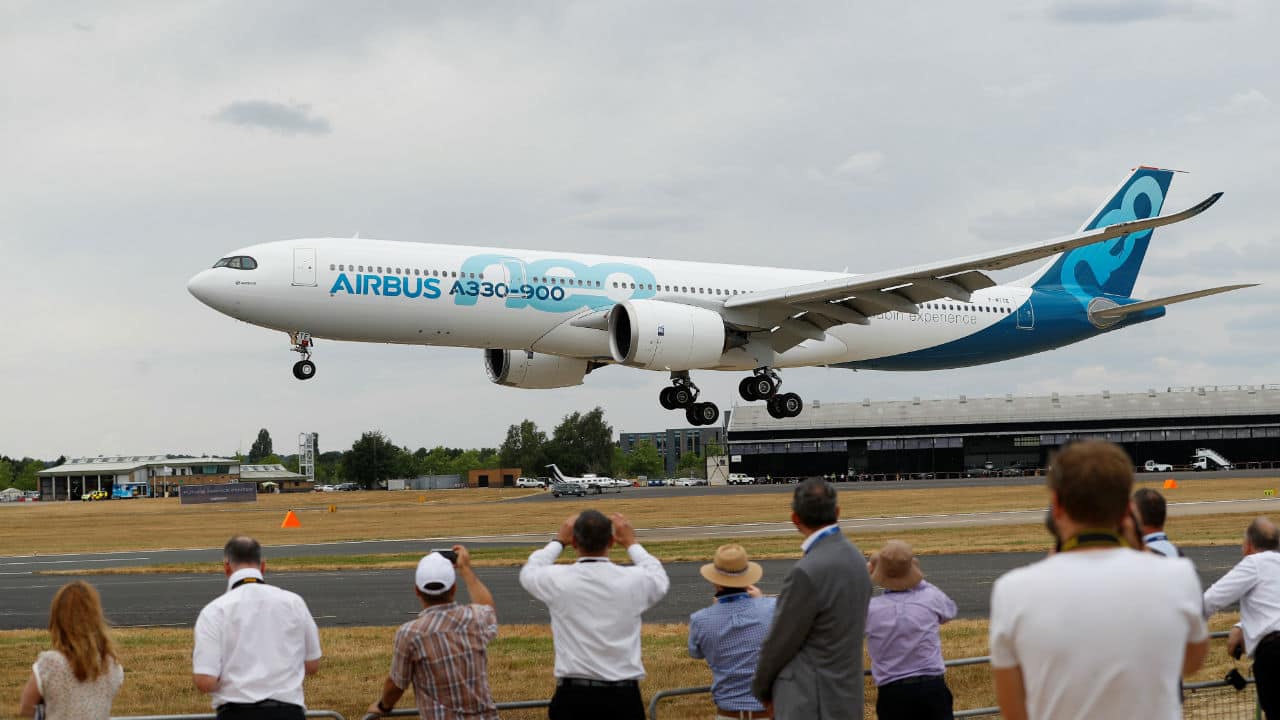 Airbus A330-900. Dynamatic Technologies is a Tier 1 supplier for the assembly of Flap Track Beams (FTBs) for the Airbus 330 family of aircraft, while Mahindra Aerostructures has been developed as a Tier 1 supplier of sheet metal parts for Airbus.

What about making planes in India?

Malhoutra is right when he points out that India is buying aircraft at a frenetic pace. Indeed, given the large number of planes ordered before the pandemic hit—India is expected to get 1,000 aircraft by 2025-26 and become the third-largest global aviation market in the next couple of years—questions are being asked about why the country does not manufacture civilian aircraft.

An industry player who declined to be identified feels that it is for the market to decide where products are made and it is not a country’s decision as the global industry is highly competitive.

“There’s always the thought that India should have a final assembly line (FAL) for commercial jetliners. Airbus has established FALs in the US and China in addition to its lines in Europe. Strategically, I think it makes better sense for India to focus on deep industrialisation, which includes engineering and design. There’s far greater value added in these activities, and we’d be playing to India's strengths,” Malhoutra says.

“Take for instance, the Flap Track Beam Assemblies we manufacture for the Airbus A318, A319, A320, A321 and A330. These are sophisticated flight-critical products where we are able to demonstrate excellence to Airbus and Spirit Aerosystems across the value chain. In addition to manufacturing efficiencies, we are able to assist in design evolution, too, while assuring IP security,” he adds.

Mahindra’s Mehra adds that the company intends to move up the value chain to build larger structural assemblies, pointing out that “assembly of a complete aircraft depends on how OEMs plan their assembly locations.”

Immediately, the biggest challenge before the industry is the Covid pandemic, which has led many countries to suspend or reduce flight operations, particularly international flights. While India has been operating some international flights through an air-bubble arrangement with a few countries, many others are yet to resume long-haul flights.

This, in turn, has forced airlines to cancel orders for new planes or put them on hold, forcing Boeing, Airbus and other aircraft manufacturers to cut back on production.

The aerospace business is only for people who have a 20 to 30 year view and an iron will to pass through the highs and lows.
- Aravind Melligeri, Chairman and CEO, Aequs

Boeing, which was already grappling with the crisis caused by the worldwide grounding of its 737 Max aircraft after a couple of crashes, saw sales of the Boeing Dreamliner and wide-body aircraft in general take a beating.

With aircraft production slowing down, the component-supply ecosystem, too, has been battered. The Indian industry has not been spared either and companies have seen their orders from Boeing and Airbus thin, leading some to switch their focus to defence aircraft.

Indian manufacturers have gone beyond the commercial aircraft space to also make a mark in the manufacture of defence aircraft.

Dynamatic Tech has accelerated its defence production and slowed down production of civilian aircraft parts as these aircraft have largely been grounded globally because of the pandemic.

Work on defence aircraft will only grow in the coming years. “Boeing’s first joint venture in Hyderabad, where we build the main body of the Apache helicopter, is an example... Another example of this progression would be our commitment to build fighter jets in India, in line with the focus on Make in India for the IAF’s Multi-Role Fighter Aircraft competition,” says Boeing’s Gupte.

Airbus has proposed to set up Final Assembly Lines for its products in India that are part of the defence programme. “In the frame of the ongoing support to modernise the Indian armed forces, the C295 has been offered to replace the IAF’s ageing Avro fleet. As part of that programme, Airbus has offered to manufacture the C295 aircraft in India in partnership with the Tata group,” Maillard says.

Clearly, Indian companies have made a mark in the global aircraft component space. Just how much the sector has grown in India can be seen from the fact that there are comparisons with China, which is considered the production hub of the world. Indeed, one industry player says that his company has “won work globally, even against some Chinese bidders.”

But while things are a little easier today, says Aequs Chairman Melligeri, the aerospace business is not for the faint-hearted. “It is only for people who have a 20-30-year view and an iron will to pass through the highs and lows. At the end of the day, what gives me satisfaction is that we had embarked on the Make in India journey way before the term had been coined,” he says, about a job well done.
Ashwini Phadnis Senior journalist based in New Delhi
Tags: #Aequs #Aeromodelling #Airbus #Aravind Melligeri #Bell Helicopter #Boeing #Dynamatic Technologies #Mahindra Aerospace #Mahindra Aerostructures #Udyant Malhoutra
first published: Aug 28, 2021 11:47 am