Kerala badly needs investments from businesses, and not just from Kitex Garments

The Kerala government needs to find tax resources to pay for the welfare scheme instead of depending on borrowings. It can ill afford an incident such as the fracas with Kitex Garments.

Last week, Kitex Garments managing director Sabu Jacob announced that his company was withdrawing from an agreement with the Kerala government to develop an apparel park and three industrials parks, claiming harassment by the official machinery. The projects involved investment worth Rs 3,500 crore and would have created some 20,000-35,000 jobs. The statement came as the company reported a near 40% drop in its unaudited revenue from operations to Rs 455.38 crore from Rs 739.20 crore due to disruptions caused by the Covid19 pandemic.

Kitex Garments is a leading apparel maker and belongs to a diversified Anna-Kitex Group of companies with interests in cookware, fabrics and food products. Jacob’s troubles with the government appear to have a genesis in a decision to field eight candidates to contest the 2021 Assembly elections.

These candidates represented Twenty20, a non-profit that he founded. Twenty20 has previously won seats in local body elections. The state government has denied any connection with its action.

A Graveyard For Businesses

Nonetheless, the Kitex MD’s announcement brought back memories of years of militant trade unionism that drove businesses away from the southern state several decades ago and stoked scepticism about the commitment of the state government to attract fresh investments. Jacob now has offers from several other states to develop the projects there.

Kerala can ill-afford to lose any project, given the large pool of the educated and skilled working-age population, high levels of unemployment and thin presence of large industrial and services companies in the state.

The state was home to just 7,696 factories, according to provisional estimates of the 2018-19 Annual Survey of Industries. That’s about 3.2% of all the factories in operation in the country that year.

Factory Scene In The State

Almost every sixth factory in the country was located in Tamil Nadu, and it posted a 46% decadal growth. States such as Haryana and Punjab, with a similar sized economy, had many more factories than Kerala. Interestingly, Gujarat has more factories than Maharashtra.

The ASI numbers also show that collectively factories in Kerala were relatively low employment generators and therefore diversion of any investment away from the state can prove detrimental for employment creation in the organised sector of the state. The state’s share in the number of people engaged – factory workers, clerical and managerial staff – was lower than the share in the number of factories.

Kerala’s factories together employed just 2.5% of all the people working in the factories across the country. In comparison, Tamil Nadu’s share was 15.7%, about the same as its share in the total number of factories. The relatively low presence of industry, notwithstanding, per capita income of Kerala at Rs 2.22 lakh in 2019-20 was about 63% higher than the national average of Rs 1.36 lakh. Kerala’s per capita income, derived from the state’s net state domestic product, was almost at the same level as that of Karnataka and Telangana which have a larger industrial base.

This is because Kerala received a strong flow of remittances from its overseas workers that helped boost the local economy, particularly home construction. Delhi, with a dominating services sector, had a per capita NSDP of Rs 3.76 lakh in 2019-20. Goa, a favourite holiday destination among domestic and foreign tourists, reported the highest per capita income at Rs 4.67 lakh. 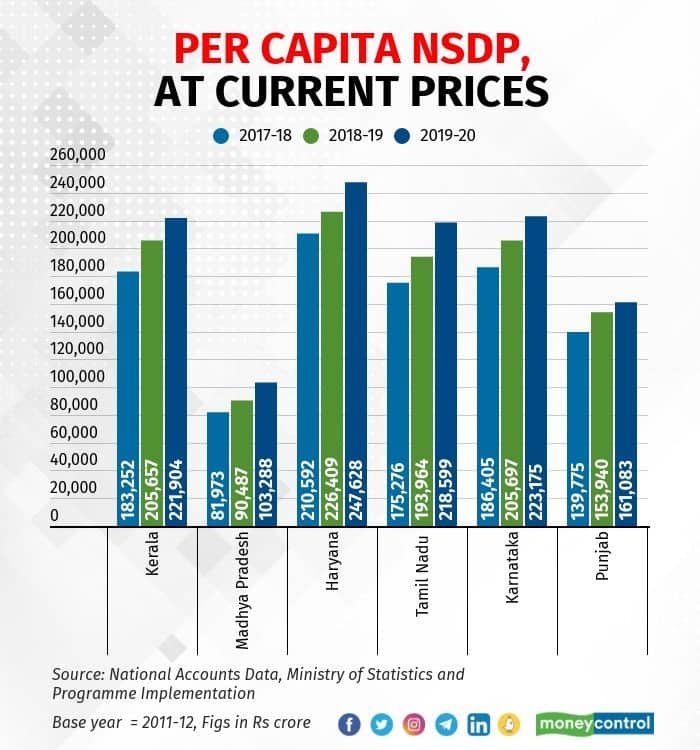 Kerala’s economy was about the same size as that of Madhya Pradesh and Haryana, and just a little smaller than Delhi’s, measured in constant 2011-12 prices. At Rs 5.16 lakh crore, at constant 2011-12 prices, the state’s economy was nearly a quarter the size of Maharashtra’s and a little more than 40% of Tamil Nadu’s economy. Maharashtra and Tamil Nadu were the largest state economies and their economies were powered by industrial activity for several years before the services sector became dominant.

Kerala’s growth decelerated in 2019-20, hurt by the two consecutive years of devastating floods and overall contraction of demand in the Indian economy. The economic slowdown in the Gulf nations also had its repercussions for the local economy as jobs were lost and the flow of remittances affected.

Kerala grew only 3.4% in 2019-20, at constant 2011-12 prices, slipping from 6.5% growth in the previous year. The slippage in growth in Kerala was greater than the slowdown seen in the Indian economy.

Let’s Take A Look At Growth

The Indian economy expanded by 4% that year after reporting a 6.5% expansion in 2018-19. Growth trends across states were mixed that year. States such as Andhra Pradesh, Haryana, Madhya Pradesh and Delhi experienced an acceleration in growth while Maharashtra, Gujarat, Karnataka and Uttar Pradesh skidded. Tamil Nadu’s growth rate remained constant at about 8%.

Gross value added slowed considerably from 6.2% in 2018-19 to 2.6% in 2019-20, as agriculture was impacted by floods and construction activity by domestic factors and the economic slowdown in the oil-dependent Gulf nations. The growth of the gross value added in the construction sector slowed to 3.7% from about 10% in 2018-19, data published by the Kerala government show.

Construction contributes over 14% to the gross value added at basic prices of the state. The contribution of agriculture has been on a decline and it was about 8% in 2019-20.

Its total tax revenues shrank just 2% in 2019-20 and it was expected to shrink another 1% in 2020-21 as per the revised estimates for that year. The Union government’s revenues have also been under stress.

A shortfall in revenues requires states to borrow to provide for various expenditures. The outstanding liabilities – debt accumulated over the past – of states was estimated at 26.6% of their GSDP. Others being Uttar Pradesh, West Bengal, Rajasthan, Punjab, Himachal Pradesh and Andhra Pradesh. Kerala’s outstanding liabilities to GSDP was estimated at 30.3% while it was 35.7% for Himachal Pradesh.

Among the expenditure that has risen the most in Kerala is spending on social welfare and nutrition. Two successive years of devastating floods in 2018 and 2019 followed by two years of economic disruption caused by the Covid-19 pandemic necessitated that the government spend more on providing free meals and rehabilitating the affected.

The Kerala government needs to find tax resources to pay for the welfare scheme instead of depending on borrowings. Tax revenues will grow only when there is more economic activity in the state, unemployment brought down and demand stimulated.

That requires crore of rupees of investment by businesses. And that will happen only if the state government adopts a business-friendly approach.
Tina Edwin is a senior financial journalist based in New Delhi.
Tags: #Kitex Garments #textiles
first published: Jul 6, 2021 06:11 pm