The primary market in January-February is decisively stronger than a year ago, and experts are optimistic that the trend would continue

The primary market has rebounded strongly since the middle of last year after lockdowns eased, and has accelerated in 2021, setting the stage for even more capital raising with a series of issues likely in March, bankers and experts said.

The liquidity-driven rally in the secondary market and overall optimism about the economy, and corporate performance has also boosted the sentiment in the primary market, which has seen capital raising of more than Rs 43,800 crore through IPOs since 2020.

In the first two months of 2021, eight companies raised Rs 12,720 crore, while in the same period last year, not a single company launched an IPO.

March is expected to be even better. Experts, citing banking sources, say about 10-16 companies may launch their initial public offerings in coming month.

"With the remarkable economic recovery and overwhelming performance of the last few IPOs many companies have geared up to launch their offers to the public. Hence, we believe the IPO market will remain strong as the overall sentiment of D-Street is supportive," Prashanth Tapse, AVP Research at Mehta Equities told Moneycontrol. 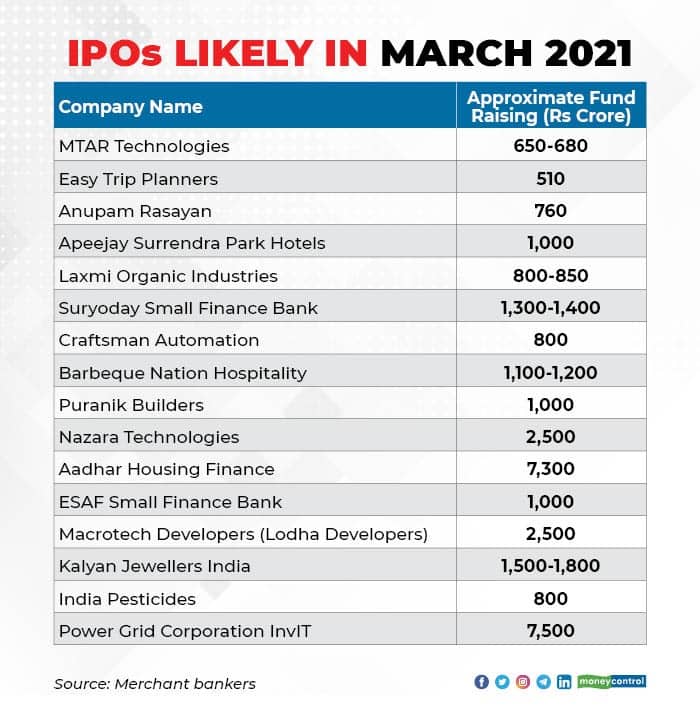 Astha Jain, Senior Research Analyst at Hem Securities feels the list of IPOs in March could be higher than January-February 2021.

After hitting record high levels - climbing over 52,000 on the Sensex and 15,400 on the Nifty50, the market witnessed some correction and volatility in the last few sessions, though it rebounded on February 24.

Experts feel the market has a strong support from several measures announced by the government, FII inflow, better-than-expected corporate earnings for last three quarters and controlled COVID-19 cases along with smooth vaccination programme. Hence, according to them,

Experts said the market may see intermittent correction, not a steep fall.

"Volatility is an integral part of any market given domestic economy highly connected to global events. We see Indian market seems to be in the consolidation mood, such consolidations are in-line with expectations after a stellar record-setting rally in the last month," Tapse said.