Retail inflation cools to 5.59% in July, comes back to within MPC's target range

For the two months of May and June, CPI inflation was above the MPC's target band. It was 6.30 percent in May, as food prices had hardened, and transportation costs rose due to higher petrol and diesel prices and localised lockdowns. Headline retail inflation had cooled slightly to 6.26 percent in June.

Consumer Price Index-Based inflation (CPI) for July came in at 5.59 percent, back within the Monetary Policy Committee's inflation targeting range of 4 (+/-2) percent, on the back of softening food prices.

For the two months of May and June, CPI inflation was above the MPC's target band. It was 6.30 percent in May, as food prices had hardened, and transportation costs rose due to higher petrol and diesel prices and localised lockdowns. Headline retail inflation had cooled slightly to 6.26 percent in June.

"The considerable moderation in the CPI inflation was primarily led by food and beverages. The softening in the core inflation to 5.7 percent in July from 5.9 percent in June provides some relief," said Aditi Nayar, Chief Economist with Icra Ltd.

She added that the supply-side measures taken by the government appear to have helped dampen the inflation for oils and fats as well as pulses.

"The decline in prices suggests that inflation was largely a function of supply chain disruptions. We believe that inflation may ease in the coming months assuming no rise in infections. However, high oil and commodity prices will keep the pressure on prices," said Rumki Majumdar, Economist with Deloitte India. Data for July showed that the biggest drop in prices happened in vegetables. Vegetable prices deflated by 7.75 percent in July compared to a deflation of 0.70 percent in June and 1.92 percent in May.

As the attached chart shows, there was only a marginal drop in inflation in the oils and fats sub-group, which came in at 32.53 in July, compared with an inflation of 34.78 in July and 30.84 in May.

Prices of pulses and products fell compared to June while that of meat and fish nearly doubled, as per the official data.

In the non-food category, high petrol and diesel prices continued affecting the budget of households. Fuel and light inflation was 12.38 percent in July, compared with 12.68 percent in June and 11.58 percent in May. 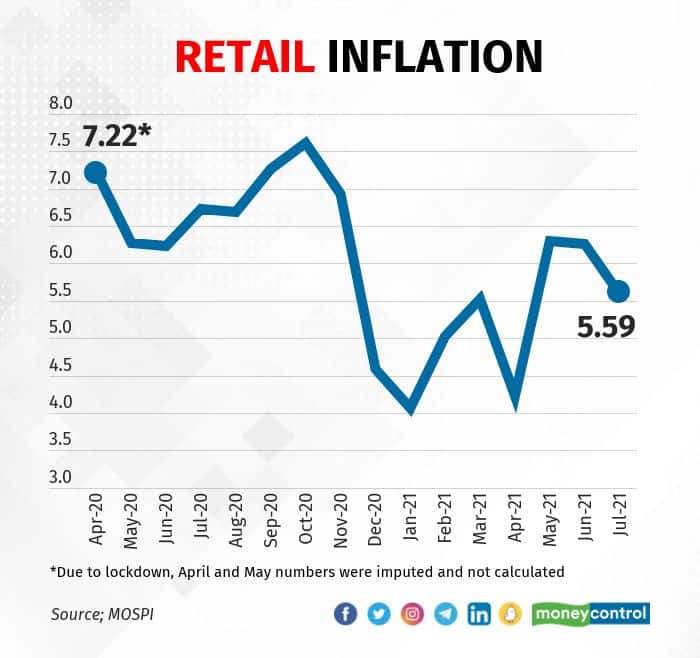 Aditi Nayar of Icra said that the July retain inflation print will help in quelling anxiety about the immediacy with which repo rates need to be hiked by the MPC.

"Nevertheless, with inflation expected to remain sticky in the 5-6 percent range over the next three quarters, it's increasingly difficult to characterise the pressures as purely transitory in nature," she said, adding that a small disruption could push inflation back above the 6 percent threshold.

"We anticipate that the MPC will embark on policy normalisation once domestic demand strengthens and starts dominating inflationary pressures, in place of supply-side issues," she said.