In October, the Ministry of Electronics and Information Technology (MeitY) approved 16 eligible applicants under the PLI scheme. The PLI for large scale electronics manufacturing extends an incentive of 4 to 6 percent on incremental sales of goods manufactured in India to the eligible companies, for a period of five years.

The Production Linked Incentive (PLI) scheme has the potential to create nearly 1.40 crore man-months worth of jobs directly, from the upcoming financial year, as per industry estimates.

Lohit Bhatia, President, Indian Staffing Federation told Moneycontrol, “The PLI scheme has a potential of creating close to 1.40 crore man-months of additional workers. We can say that we are looking to double the workforce engaged in production and manufacturing activities.”

“Additionally, the PLI scheme is expected to have a cascading effect, the impact of which will go right up to the MSME (Micro, Small and Medium Enterprises) sector,” Bhatia added.

With the inclusion of the suppliers and vendors of the manufacturing companies benefitting from the PLI scheme, a total of 4.20 crore man-months of jobs are set to be generated, as per the data by Indian Staffing Federation. 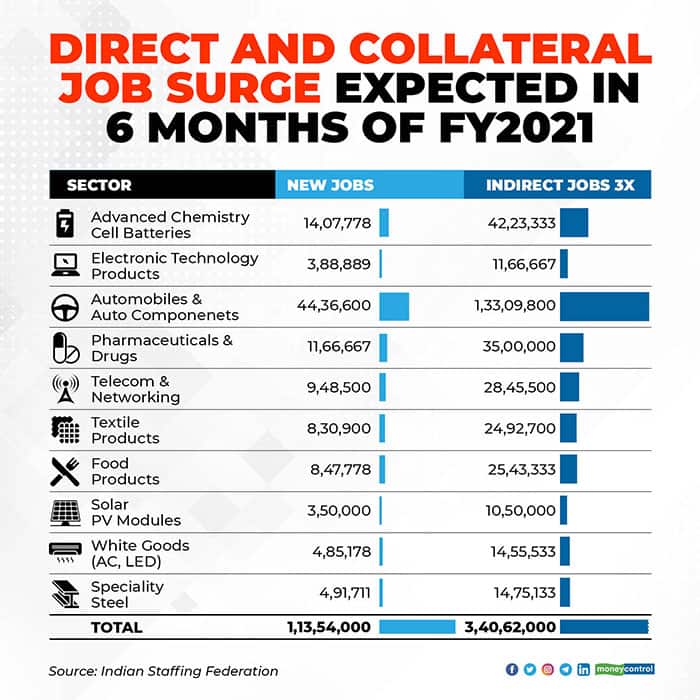 As per the industry valuation, the PLI scheme is expected to yield employment creation from the next financial year.

“Unlike the service sector where the gestation period for planning and execution is fairly short, the gestation is much longer for logistics and production companies. The jobs will start being visible from the next financial year and thereafter is when the majority of job creation will occur in the next two years or so,” said Lohit Bhatia.

In the month of March this year, the Narendra Modi-led NDA government introduced the PLI scheme. The scheme proposes to give incentives to companies on the incremental sale of products manufactured in the domestic units.

The scheme will not only invite foreign companies to set up manufacturing units in the country but will also encourage the local companies to expand production and manufacturing in India. Furthermore, the scheme is expected to cut down import bills, reduce dependency on China and also absorb the country’s growing workforce.

The sectors that were initially eligible to avail the benefits under the PLI scheme included medical device manufacturing, pharmaceutical ingredients and mobile and equipment manufacturers.

In October, the Ministry of Electronics and Information Technology (MeitY) approved 16 eligible applicants under the PLI scheme. The PLI for large scale electronics manufacturing extends an incentive of 4 to 6 percent on incremental sales of goods manufactured in India to the eligible companies, for a period of five years.

Recruiters believe the blue-collar workforce which migrated back to their hometowns due to the Covid-19 induced lockdown will be the prime beneficiaries of the scheme.

“The liberalization policy of the early 90s impacted and supported only the white-collar workers like the telecom, retail, BFSI etc. Today, the manufacturing sector contributes to less than 20 percent of the GDP whereas the service sector has a 55 to 60 percent contribution. Even during the pandemic, the worst impact has been on the blue-collar workers, I think the government’s focus with the PLI  scheme is targeted towards manufacturing and the people engaged in production and correcting the anomalies created in the economy in the last three decades,” remarked Bhatia.
Shreeja Singh
Tags: #Aatmanirbhar Bharat #Covid-19 #Economy #manufacturing #PL/I
first published: Nov 20, 2020 05:22 pm