MC Explains: What the RBI can do to rein in rupee’s depreciation

If the RBI wants to counter rupee depreciation, it should continue to improve macroeconomic fundamentals and take measures to increase capital flows into the country

The financial markets are awaiting the outcome of the Reserve Bank of India’s Monetary Policy Committee (RBI MPC) meeting scheduled on September 28-30. While it is widely expected that the RBI will increase policy rates to counter inflation, questions are being asked about what the central bank can do to counter the rupee’s depreciation against the United States Dollar.

The Rupee fell below Rs 80 to the Dollar after the US Federal Reserve (Fed) increased its policy rates on September 22. This explainer helps understand the impact of the Fed’s policy on the Rupee and what can be done to counter its depreciation against the Dollar. Why did the Fed’s policy lead to rupee depreciation?

The world economy has become highly financialised. Global investors move funds from one country to another fairly seamlessly and aggressively.

As global funds move towards countries with higher interest rates, demand for the local currency declines and it depreciates against the foreign currency.

This is what happened to the Rupee, most recently when the Fed increased policy rates by 75 basis points (bps) for the third successive time. The Fed has been very aggressive in increasing policy rates to tackle inflation, which touched levels last seen 40 years ago.

This is a rare moment when the inflation rate in India is lower than that of the US and other developed countries. 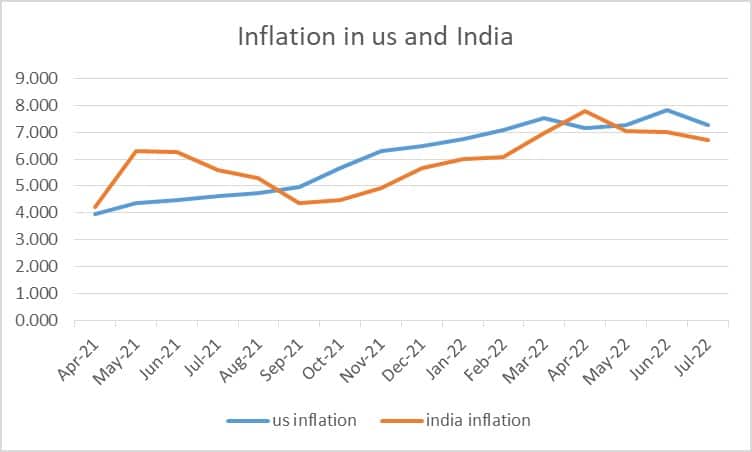 Inflation in US and India

The Fed’s aggressive policy stance has reduced the interest rate differential between the US and India to 2.3 percent from 3.6 percent. This reduction and confidence in the US monetary policy have led to the recent depreciation of the rupee.

What is the impact of currency depreciation?

If the economy is dependent on imports for crucial items such as food and fuel, then depreciation of the local currency is harmful for the economy. Crude oil and commodity prices have gone up sharply because of the Russia-Ukraine war. As most oil and commodity contracts are priced in dollars, depreciation of the local currency makes oil even more expensive.

This causes worries that inflation will accelerate further due to currency depreciation. If countries have borrowed in dollars, a depreciating local currency leads to higher borrowing costs as well.

What has the RBI done to counter rupee depreciation?

The Rupee has been weakening steadily against the Dollar through 2022. The Rupee has depreciated by 9.8 percent since January and has actually appreciated against other major currencies in the same period.

The RBI has already taken many measures to counter the Rupee’s depreciation. Although the central bank has increased policy rates mainly to counter inflation, it has also helped to maintain the inflation differential.

The central bank has actively sold dollars, which has lowered the country’s foreign exchange reserves to $545 billion from a high of $642 billion in 2021, as per the latest data.

The depreciation of the Rupee is based not only on current fundamentals but expected fundamentals too. Another group says the RBI should use its forex reserves to support the Rupee because that is the purpose of maintaining reserves in the first place.

The RBI’s own view is that it intervenes in the foreign exchange markets to reduce volatility.

Additionally, the central bank has taken measures to encourage capital flows in Non-resident Indians’ (NRI) deposits and external commercial borrowings and it has encouraged India’s trade to be priced in rupees. The government, while banning exports of select agricultural commodities, has encouraged more foreign investment.

These policies even managed to reverse the flow of foreign portfolio investments. Since January 2022, foreign investors had been net sellers and they turned net buyers in July.

Should the RBI increase policy rates aggressively to counter depreciation?

Firstly, the objective of the central bank is to counter inflation and not currency depreciation. India’s inflation rate is not as high as in the US and does not warrant steep rate hikes.

Secondly, a steep rate hike will have negative consequences in terms of lower growth. Over time, higher growth will lead to higher capital flows.

The central bank should broadly allow the exchange rate to move in the direction driven by the markets. If it wishes to counter depreciation, it should continue to improve the macroeconomic fundamentals and take additional measures to increase capital flows into the country.