Even as household expenditure dwindled by a record margin in FY21 as a result of the COVID-19 pandemic, government expenditure continued to rise as the Centre hoped to raise demand in the economy, the latest data released by the National Statistics Office (NSO) show.

This was the lowest in India’s history from FY51, said Devendra Kumar Pant, chief economist at India Ratings and Research, said. "The previous lowest PFCE growth was negative 2.2% in FY80," he added. 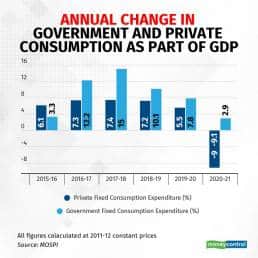 Major fall in household expenditure as families tightened their budgets

PFCE is a realistic proxy to gauge household spending. In FY21, PFCE constituted 56 percent of GDP, down from 57.1 percent in the previous year.

The sharp fall in household spending had been one of the most evident predictions by economists for FY21 given the salary cuts in the services sectors and large scale job losses in the manufacturing sector owing to the pandemic and the resultant economic slowdown. This had prompted households to put off the purchases and save instead while overall consumer confidence was also hit significantly.

The lockdown and the resultant fall in incomes meant that people were putting off purchases of aspirational items such as cars and televisions. A household's decision to buy a car or a consumer durable product such as television is not as much a function of current income as it is about expectations of future income.

In the latest January to April quarter, PFCE was 55.4 percent of GDP compared to 58.3 percent during October to December period.

A majority of Indian cars and relatively costly consumer durables are bought through loans. Job losses and salary cuts across sectors have crippled a household's means to finance a purchase over a three- to five-year period.

The government's focus on dealing with the pandemic-led economic downturn by ramping up public expenditure is visible in the latest figures. In FY21, GFCE constituted 11.7 percent of GDP, up from 10.6 percent in the previous year.

GFCE includes government expenditures including compensation to employees, purchase of non-durable goods and also durable goods which are used for defence. It does not include government capital spending which gets captured in the gross fixed capital formation component of the GDP numbers.

On a quarterly basis, government consumption has been on a constant rise over the past four quarters.

Experts point out that a considerable improvement in both household and government spending would be needed before policymakers can hope to restart the country's economic growth.