25% Indians had a tough time finding their first job: Survey

Only 16 percent candidates in the United States found it difficult to find their first job.

Indians find it difficult to land a job. According to a survey by digital learning platform HBR Ascend, 25 percent Indian respondents in India found it difficult or very difficult, to find their first job.

Only 16 percent candidates in the United States found it difficult to find their first job.

The HBR Ascend Youth Skills Survey 2019 found that a majority of global respondents experienced some degree of difficulty in finding their first job, with one-quarter (25 percent) stating it was either difficult or very difficult, and one-third (33 percent) finding some difficulty. Only 36 percent said it was easy to find their first job.

With respect to how they would find their first job, the respondents said that they looked at a recruitment drive on their college campus, a job site, a personal network, a friend, or by directly approaching the organisation.

Barriers at the workplace

Globally, office politics has been ranked as the top barrier to performance. Apart from this, the other factors include lack of training and development,  unclear/changing job roles and restrictive work culture (20 percent) among others. An alarming alert to employers, according to the survey, is that almost one out of two of respondents said that they experience periods of disengagement at work. Around 18 percent report they feel engaged only when working on challenging and interesting projects.

Further, only 29 percent respondents are engaged and excited to go to work every day.

The survey said employers need to do more to create engaging work and work environments for their youngest employees.

How do they choose the employer? 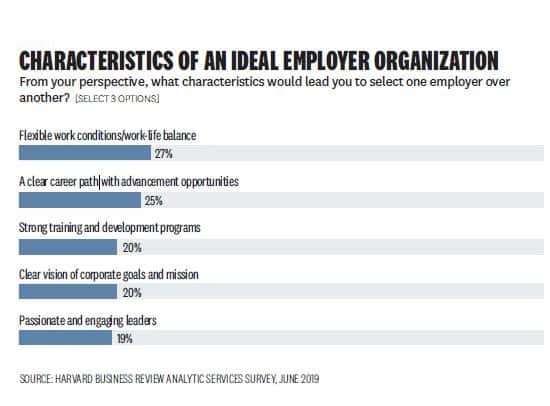 The respondents also view flexible work conditions as one of the biggest reasons for choosing a particular employer. This is followed by training and development programmes and a clear corporate mission.

This survey was conducted in June 2019 to understand the skills gap and barriers to success for graduating students and young professionals. A total of 2,756 members responded to all questions.