Rakesh Arora of Macquarie says the terms of the deal with JSW Energy to sell JSPL's thermal power plant at Chhattisgarh seems fairly satisfactory and beneficial to both companies.

The fourth quarter earnings of Jindal Steel and Power (JSPL), backed by strong performance of the steel business, have been "highly impressive", says Rakesh Arora of Macquarie Capital Securities.

"This prompts a relook at both earnings estimate and rating of the stock," he told CNBC-TV18 in an interview.

"The quarterly loss shrunk to just Rs 2 billion (200 crore) and the company is all set to turn to positive net profit in FY17E (estimated) against our estimate of losses in FY17 and FY18," a note by Macquaire read.

The estimate of loss in FY17 was based on the assumption of steel prices dipping but they are well ahead of minimum import price (MIP) now, which provides comfort, Arora said. Steel prices have increased by Rs 3,000-4,000 per tonne over the average seen in the fourth quarter of FY16. 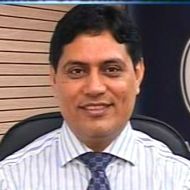 Although power business continues to be a drag, the steel business should drive profitability, he said in an interview to CNBC-TV18.

Arora said the terms of the deal with JSW Energy to sell JSPL's thermal power plant at Chhattisgarh seems fairly satisfactory and beneficial to both companies.

Below is the verbatim transcript of Rakesh Arora's interview with Latha Venkatesh and Sonia Shenoy on CNBC-TV18.

Latha: What was the key takeaway? Is JSW a winner in this deal at al? It will pay Rs 4,000 crore, if it doesn’t get the coal and the other power purchase agreement (PPA) condition, it will pay Rs 6,500 crore only if it gets the coal linkage and the buying condition. So is this a deal fair to JSW, is it well hedged?

A: I think it is a very fair deal and it meets requirement of both the parties. JSW gets this asset at a huge discount -- Rs 6,500 crore is the replacement cost for this kind of asset and they will be paying only Rs 4,000 crore in case PPA or coal linkages are not there.

It is also fair from JSPL\\'s point of view because they need liquidity now and there will be some liquidity coming in because of steel. So, both the parties should be fairly satisfied with the outcome and yesterday the stock also indicated that there was no real major movement in both these companies stocks. So market seems to be also satisfied with this deal.

Sonia: Today the market will also react to the JSPL\\'s earnings, what did you think of that because the power business has seen a very weak operational performance. Overall as well the realisations for the company has fallen, how do you expect the street to react to the earnings today?

A: Earnings were much better than what we were anticipating and largely driven by the cost reduction in the steel side plus the volume push they have been able to do. Power has been a little bit of drag and that is the reason they are looking to sell down some stake here because the near-term visibility is low.

Going forward steel prices are moved up by another Rs 3,000-4,000 per tonne and JSPL would be able to breakeven in Q1 of FY17 itself against our estimation of a loss in FY17 and FY18. So operating performance of JSPL has been far superior than what we or street were building in. So market should react to very positively to it.

Latha: You were saying you were expecting the company to post losses in FY17, can you explain again?

A: We were expecting that company would remain loss-making for the full year FY17 and even to some extent FY18 but now it appears to me that given this strong performance and the sharp rise in steel prices, we should be able to see JSPL post profits even in Q1.

Latha: Your in-house estimate is that -- the minimum import price (MIP) can be imposed only for six months and it already faces a lot of opposition with the Japan taking it to the World Trade Organisation (WTO) and stuff like that but at the moment, the MIP is pointless because anyway landed price of steel is more expensive. Will that be the situation that the steel EBIT will continue to be positive enough to finance the interest cost?

A: The reason we were building in a loss in FY17 is precisely for the reason that we thought steel prices might come down but now they are well ahead of MIP and it looks like that FY17 at least we should be fine. So for FY17 there is a good chance company remains profitable even at that profit.

Sonia: You do track a lot of other sectors including sectors like cement. I wanted your thoughts on how this quarter has panned out because some of these sectors have done well, Ultratech, Ambuja, all posting a very healthy double digit volume growth. Do you expect to see more on the upside there?

A: Unfortunately the takeaways from our survey of the market is not very great. So in April, demand is plummeted to 0-2 percent as compared to more 11 percent that we saw in Q4. Costs are also starting to move up with crude prices going up and petcoke prices moving up. Cement prices are largely flattish into April as compared to March. So I think we have peaked out in profitability in Q4 and we are back to our old ways. So not too much of optimism out there at the moment.

Latha: This is the first set of steel results that we have got, JSPL. We have got the smell of how this steel numbers will look, what is your JSPL price target as well, are you therefore upping expectations from the other steel guys?

A: Our JSPL price target is Rs 110 and it is largely based on replacement value rather than earnings because then earnings that we are posting off but for the other steel companies, volumes have been very strong and that means they will also benefit to that extent from cost reduction and should post decent numbers but Q1 is going to be where profits are going to peak. So we will have another quarter of very strong earnings coming through.