World‘s largest forging company, Bharat Forge, yesterday reported a weak set of numbers. But, company‘s Executive Director, Amit Kalyani believes that the downturn has ended and the company is back on growth trajectory.

World’s largest forging company, Bharat Forge, yesterday reported a weak set of numbers. But, company’s Executive Director, Amit Kalyani believes that the downturn has ended and the company is back on growth trajectory.

“If you look at quarter on quarter, we are beginning to grow, next quarter looks promising,” said Kalyani.

In the third quarter, Bharat Forge’s profit fell by 21.5 percent year-on-year to Rs 128.6 crore. But, Kalyani expects the fourth quarter to be stronger than the third because of the pre-buy ahead of the new emission norms.

He also said that the situation is improving in the domestic and global market and Bharat Forge should perform well this year. He has an optimistic view ahead and says that financial year 2018 will be stronger than FY17 on the back of growth in passenger cars, more demand in the oil & gas space. 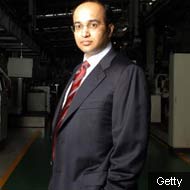 The company is making investments in new capacities, has won two new orders and has set up a 5000 tonne press line. It has also doubled business in the defence sector on the revenue items and is also getting traction in the railways. Kalyani says these are drivers for growth for next year.

The proposal of a border tax in the US is making people nervous but Kalyani says that it is an unrealistic case. He added that the company has set up a manufacturing facility In the States. The border tax is a value-added tax levied on imported goods.