Are retail loans as safe as they look for banks?

Retail loans can cause big trouble even if the performance is sound, as seen in the case of RBL Bank Ltd.

Big things begin with small steps. But so do big problems. Considered as the safest segment to lend by banks, retail loans have been a major pain point in recent times. The pandemic has made India’s banks find out that the retail borrower is not bereft of credit risk, but merely less riskier than a corporate borrower due to size. In a nutshell, retail loans can turn troublesome when lenders relax their risk assessments. Data from the regulator, and the performance of two private lenders shows the need to be vigilant.

Now you can see me

Retail loans can cause big trouble even if the performance is sound, as seen in the case of RBL Bank Ltd. Leadership developments at the private sector lender have brought an unsavoury context to its otherwise healthy retail portfolio. Note that the bank’s troubles are not entirely connected to its retail loans. Then again, RBL Bank’s retail delinquencies have been higher than most other peers. Cast your eyes on the following chart pertaining to RBL Bank which shows that 3.53 percent of retail loans had turned non-performing as of September this year. This is higher than roughly 2.5 percent for all private sector banks put together, the Reserve Bank of India’s (RBI) report on trend and progress of banking shows. In fact, RBL Bank’s retail bad loans have been higher than industry even before the pandemic. It was around 2 percent in Q4FY20, up from 1.4 percent in FY17.  That for all private sector banks had stayed around 1.5 percent. 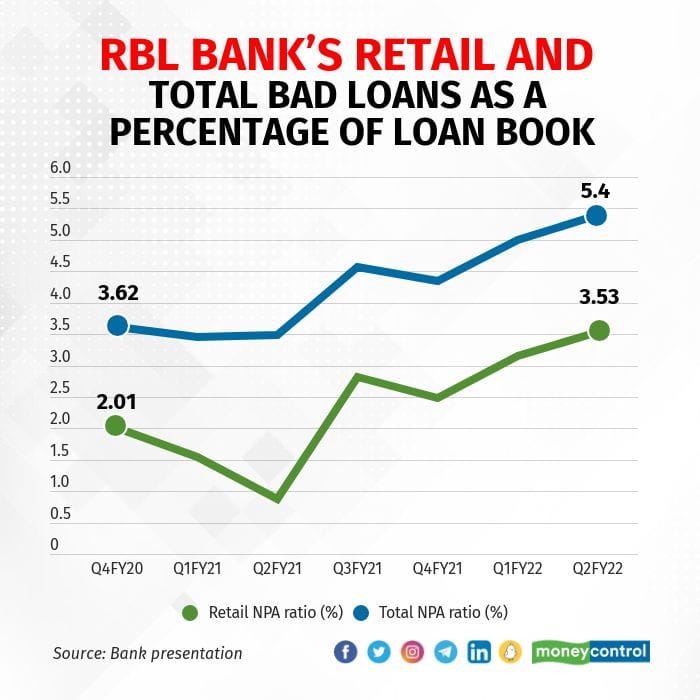 Retail loans delinquencies have surged for private sector lenders in the past two years, shows the RBI report (See chart below). In FY20, bad loans in retail book for private sector banks was below 1.5 percent. This has risen to nearly 2.5 percent by Q2 of the current financial year. For public sector lenders, the ratio is marginally less. The pandemic has played a big role in this, no doubt. Shocks to the real sector invariably affect small balance sheets more than big ones as the latter have the wherewithal to withstand them due to size. The impact on incomes and employment have shown up in the individual borrower’s ability to repay loans. The one-time dispensation on restructuring of loans has softened the blow to some extent. A large part of restructured portfolio came from retail loans. The share of restructured loans in the retail portfolio surged to 0.4 percent in FY21. For wholesale loans, this share slipped. A diversified loan book offsets credit risk to a large extent, whether corporate or retail. In the case of RBL Bank, retail loans formed 55 percent of the total book. But riskier credit cards formed 40 percent of the retail book. For a large lender such as ICICI Bank, retail loans are 60 percent of its loan book. But riskier unsecured retail loans are less than 20 percent. It all comes down to how aggressive a bank is in underwriting risk. ICICI Bank has seen a surge in its slippages from the retail book in the past two years, and its retail bad loans form more than 3 percent of its loan book. It is clear that banks both large and small have witnessed rising stress in their retail portfolios. But the answer to whether retail loans are safe is not simple and linear. Stress has increased but it hasn’t reached alarming levels seen in the previous bad loan cycle involving corporate loans. While there is no need for alarm, there is a need for banks to be watchful until the dregs of the pandemic are behind us.
Aparna Iyer
Tags: #RBL Bank #retail loans
first published: Dec 29, 2021 05:06 pm