Market capitalisation of Dogecoin has surged past $42 billion, nearly 30 percent increase in the last 24 hours.

The meme, widely shared on the internet, had inspired the Dogecoin cryptocurrency. (Image: Shutterstock)

Dogecoin has once again claimed its peak as the most valuable meme cryptocurrency with nearly 38 percent rise, outpacing Shiba Inu.

The price of Dogecoin touched $0.3298, the highest since August, and has now reclaimed its rank at eighth from tenth, according to CoinmMrketCap, at the time of writing this article. The meme token has formed a W-pattern, indicating two lows. This double bottom in technical analysis of a stock in markets signals the beginning of potential uptrend. 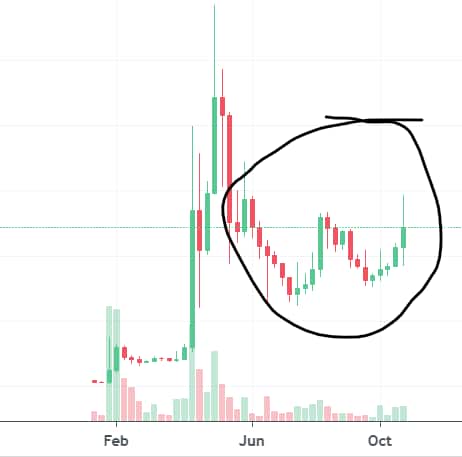 Dogecoin price trend displaying a W. [Image: WazirX]The market capitalisation of Dogecoin has shot past $42 billion, up nearly 30 percent in the last 24 hours.

While Dogecoin was overtaken by its arch-rival, Shiba Inu, dubbed as the 'Dogecoin killer', this might be the time when it reverses the course. While both the meme currencies have the face of a canine, Dogecoin operates on its own blockchain and Shiba Inu is hosted on the Ethereum blockchain.

The Shiba Inu price skyrocketed over 140 percent in the last week, according to CoinMarketCap. Dogecoin may now make a comeback as the price has started soaring.

Dogecoin is also endorsed by billionaire Elon Musk who has time and again highlighted his trust in the meme currency. On October 27, Musk reiterated his holdings which are limited to Bitcoin, Ethereum and Dogecoin, slyly revealing that he neither owns one of the most popular meme tokens, Shiba Inu.

He also explained the reason behind his ardent support for another meme token, Dogecoin. “Lots of people I talked to on the production lines at Tesla or building rockets at SpaceX own Doge. They aren't financial experts or Silicon Valley technologists. That's why I decided to support Doge—it felt like the people's crypto," Musk said in a tweet.

What started as a joke has now turned heads in mainstream media with financial experts closely monitoring the trajectory of these tokens.