Karthik Rangappa is educating stock market enthusiasts with a platform named Zerodha Varsity, which has become a port of call for anyone trying to understand stock markets. The offering has played a vital role in the success of online brokerage Zerodha.

Note to readers: Media reports of startups in India are typically focussed on the founders and investors. Little is known about other leaders who are doing important work. Startup Sages is a series of articles that will profile key personalities from the world of startups who are driving change, building interesting products or pursuing vital projects.

It was a chance encounter with a trading terminal at his landlord’s house that piqued Karthik Rangappa’s curiosity about stock trading. The itch to learn more about the stock markets drove him from being a techie who was selling loyalty solutions to commercial establishments in early 2000 to start trading, manage others’ portfolios and climb the corporate ladder to become vice president for equity research and education services at India’s largest stock broking platform, Zerodha.

Today, Rangappa heads Zerodha’s education initiative, Varsity. It has a web as well as a mobile app version. The app has close to a million downloads. Varsity gets around 70,000 to 80,000 page views daily, and there are around 75,000 queries posted by readers and stock market enthusiasts. The portal has close to 250 articles, spread across 12 modules.

Varsity is the cornerstone of the Zerodha business plan — the founders believed that India needed a web of initiatives to get consumers hooked into the stock markets. Unless people know more about markets and understood them, how could they invest and make money? That is the fundamental principle on which Varsity is built.

Rangappa runs Varsity with a few ground rules: no advertisements, no promotion of any specific trading portal, and no hiding information. Coverage of all kinds of topics with a commitment to answer every question posted in the comments section.

Perhaps it is the unbiased positioning of Varsity that has helped the platform become a port of call for anyone trying to understand the concepts of stock markets online. Above all the entire initiative is free of cost.

Rangappa’s association with Nithin Kamath, the cofounder of Zerodha, started from a weekend commodities trading programme they had attended together back in 2005-06. Nithin and his brother Nikhil Kamath were toying with the idea of doing something in the broking space. “Nithin was already ahead of the class and he knew most of commodities market by then. That is how I got associated with him,” said Rangappa. He joined Kamath Associates, as Zerodha was then known, to start trading in the market. His first stint did not last long, as he got an opportunity to learn asset management from EDHEC Business School in France.

His European sojourn eventually took him to London, where he joined a futures trading company. Then, the global recession of 2009 disrupted the markets and drove Rangappa back to Bengaluru.

For the second time he joined Nithin, spending 2009 trading in commodities with the Kamaths.

Even this time around, there was a break. Rangappa moved out to try his hand in asset management. Around the same time he joined a stock training programme run by the National Stock Exchange with Manipal Institute as a trainer for weekend sessions.

If the trading terminal at his landlord’s place brought Rangappa into the markets, it was this teaching gig for some quick bucks that inspired him to create learning material and explain finance to traders in simple terms. The material he created as a part of the course helped him set up the building blocks for Varsity.

Rangappa feels that perhaps it was his own nondescript academic life that propelled him to simplify complex theories for students. “Even till this date I keep away from market jargon; any such term puts me off,” he said.

Finally, in 2013, Rangappa rejoined Nithin Kamath, and this time he stayed put. Zerodha was still in its embryonic stage; it had less than 100 employees and 50,000 customers led by a promoter who was dreaming big.

At Zerodha, Rangappa has found his place. Settled in Bengaluru with his parents, wife and two children, he is part of the core team at the country’s largest broking platform.

Zerodha is more of a family than a workplace — talk to any of the top management team, and they will all say the same. Be it Venu Madhav, who manages operations, Kailash Nadh, who heads technology, Nithin’s wife Seema Patil, who heads HR or Nithin’s sibling Nikhil, they all form part of the extended family that runs Zerodha.

“I still have the note that Nithin had scribbled as an idea before starting Zerodha; it had two pillars, execution and education. I take care of the latter,” Rangappa said with pride. If today Varsity has a brand in the ecosystem, it was completely built on his shoulders. 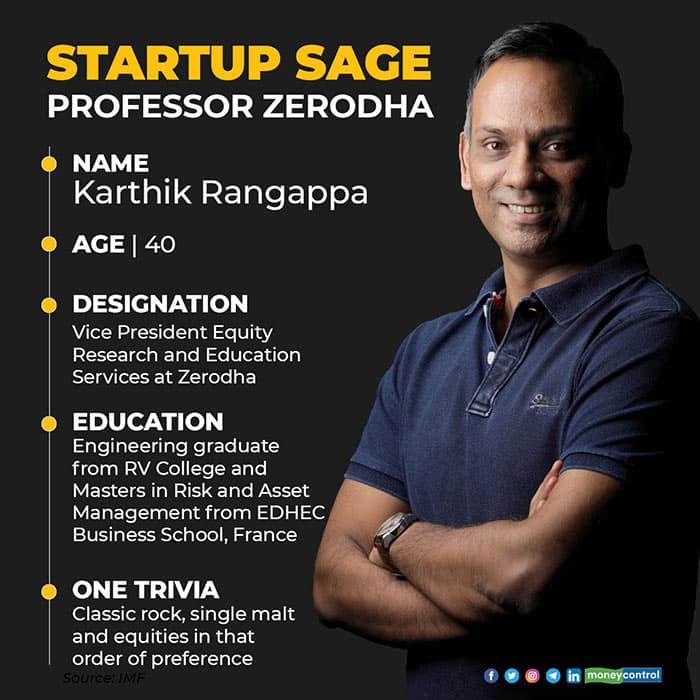 Rangappa has been driving Varsity all by himself. It is only recently that he set up a four-member team to scale up the app, and roped in someone to translate the English content into Hindi, to expand the follower base.

Asked where he gets the drive from, Rangappa is quick to answer that it is the promoter mindset. Watching Kamath’s efforts to build the company and move towards his stated goal, others, including Rangappa, were electrified by his energy and charged up.

“The core team has always stuck together and this, I believe, comes from Nithin’s mindset,” he said.

Writing about numbers, graphs and charts in eloquent and easy English is perhaps the toughest thing to achieve. But for Rangappa it is all about putting himself in a lay reader’s position. Perhaps it helps that he was once the uninitiated who had to learn everything about markets from scratch. It perhaps comes from years of training those novice traders and market enthusiasts at Manipal Institute.

“I was never great at academics myself, I needed to understand concepts in simple language; perhaps that helps me simplify concepts for others,” he said.

For reference, Rangappa does use a large number of books and online materials but his write-ups are driven by his decade-long experience in the markets. He points out that once a trader punches in a trade, whether he or she loses or makes money is not important — it is the learning that is the key. Every trade that Rangappa has ever punched in is driven by the learning that permeates through his write-ups on Varsity.

Among his favourite books is Option Volatility and Pricing by Sheldon Natenberg, which he says he must have read more than ten times. The Little Book of Valuation by Ashwath Damodaran, A Bank for the Buck by Tamal Bandopadhyay, and Way of the Turtle by Curtis M Faith are a few of his other favourites.

Rangappa is still devoting much of his time to strengthening Varsity’s content. He spends close to 90 minutes every day responding to comments on his pieces. Varsity has a large set of loyal followers and feedback from them is the key for improvement.

People come to the platform to clear their concepts and if it helps them, they usually leave behind a comment. Rangappa tracks each of these comments, which strengthen his drive.

Besides Varsity he also looks after the beta testing of the loans-against-shares product that Zerodha is testing out. He oversees the product design and tracking of initial user feedback. Besides all this, Rangappa is involved in mentoring young startups that are part of the Rainmatter initiative of Zerodha and often joins Nithin in those calls and meetings.

One thing that the pandemic has done is push him to work on his fitness. Rangappa, who calls himself lazy, says his recent workout sessions have been extremely motivating and that he spends an hour every day exercising. “I also diligently spend 30 to 40 minutes every day on gossip in our office WhatsApp groups,” he joked.

These are interesting times for the stockbroking world. Millennial investors are taking a shot at the markets. Covid-19 has sped up this adoption among the youth. Further, with the prospect of tech startups getting listed in India, Rangappa believes the coming years will be extremely exciting for stock markets.

As more youngsters join the markets, they will look for education content online and Varsity wants to be the go-to platform for these curious traders. Rangappa says if he can teach them right, they can trade with caution and do so responsibly.

For every successful trade punched by a Varsity student, there is perhaps one star getting added somewhere after Rangappa’s name. At the end of it all it is the stars that will matter and the legacy will live on.