172@29@17@142!~!172@29@0@53!~!|news|business|companies|slippages-to-reducedays-ahead-economy-is-reviving-sbi-1084807.html!~!news|moneycontrol|com!~!|controller|infinite_scroll_article.php!~!is_mobile=false
Subscribe to PRO at just Rs.33 per month. Use code SUPERPRO
you are here: HomeNewsBusinessCompanies

Slippages to reduce in days ahead; economy is reviving: SBI

Bhattacharya did not specify a timeline for taking SBI Life public, but said SBI will approach the market when conditions are favourable.

In an interview to CNBC-TV18, she said slippages—defaults on restructured loans—have already begun to reduce.

She said there were signs of a recovery in the economy.

Bhattacharya did not specify a timeline for taking SBI Life public, but said SBI will approach the market when conditions are favourable. 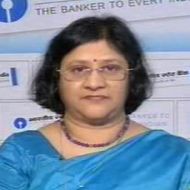 Below is the transcript of Arundhati Bhattacharya's interview with Latha Venkatesh on CNBC-TV18.

Q: This is the first day of the traditional slack season and the credit policy is about six days away. What is the sense you are getting, with the slack season coming in and with some fairly poor growth numbers that we have got, is the time ripe for us to hear about lending rate cuts from the banking system?

A: I think you will see some rate action going forward. Everybody is going to wait for the monetary policy I suppose because that does give some indicators about the thinking of the regulators as to how they see the trajectory of various economic indicators. However going forward beyond that you will see something mainly because as you rightly said the slack season is here, we need to get credit growth to pick up. So given those realities, I think some kind of a rate action will follow.

Q: What is the sense you are getting in terms of the extent of cuts for the year itself? You have some idea of your own internal analysis on both inflation and on growth. I am asking because the public provident fund (PPF) rate for the year has been announced, that is 8.7 that gives a strong competition for you all in terms of deposits so how much can money become cheap for the borrower, quarter percent, half a percent this year?

A: All of us were waiting for April 1 because we knew the small savings rate would be announced. I understand that they are supposed to be linked to the 10-year G Sec yields and maybe be 25 bps above that but even then the way the rates have been kept where they are, it is definitely great competition for the banks.

Therefore the banks have to look at other means to raise resources in order to lend. When we are doing that, obviously it doesn’t come very cheap. So we have to see how things work out.

At the present moment, I don’t see more than maybe half a percent cut across the year but one never know, we will have to see how things look, how the competition pans out. A little bit will also be dependent upon that and how banks can make their operations more and more efficient.

If the credit cost comes down, if the amount of provisioning requirement comes down then also we may have some space in which to bring down the lending rates but again this needs to unfold over the year. Right now at the beginning of the year, I am not seeing very deep cut.

Q: You are making some money by selling off stakes in your insurance units, those announcements you have made to the stock exchange itself. So how much does that add to your capital ballpark, will that money come in the first quarter itself, the current quarter as well what about the qualified institutional placement (QIP) plan? When does that fructify -- again Q1 itself?

So I think a quarter is too smaller time, maybe over the next two quarters is what I would expect some of these things to happen.

In respect of our own fund raising we didn’t say that it would be a QIP. It could be anything, it could follow-on public offer (FPO), it could be a rights depending upon what we think is right at that particular point of time.

What we have done is we have kept all the approvals ready and we have a one year window in which to approach the market. We will try to approach it at a time when we think the market looks good and therefore telling you exactly when that would be at this point of time is not possible.

Q: Coming to non-performing loans (NPLs) and provisioning -- from starting today you don’t have restructured assets. Even those who have registered for corporate debt restructuring (CDR) will not be eligible right? Today it is just bad loan and good loan starting today?

A: No I think those who have already registered for CDR, they will probably be given a 120 days window in which to complete that exercise. That is what I was told of course I don’t think we have received the notifications as yet but probably those that are already in CDR would continue to be treated as restructured standards.

In respect of new references, yes, they will become non-performing assets (NPAs) and we will need provisioning of 15 percent. Our hope is that going forward this pressure will ease. That much of the bigger accounts at least where we were perceiving problems that they have already been taken care of and there would be of course smaller accounts and there would also be one-offs because restructuring again is something that happens even in good times. So to that extent I am not seeing that the whole process will close down but definitely the kind of volumes that we have been seeing there will definitely ease.

A: For the last four quarters, we have been showing that the slippages or we have been seeing that the slippages are coming down. I think that trend will continue, I do not expect that to become higher again because on the ground also we are seeing that many of the companies are beginning to get bills paid, they are again beginning to work. So there are early signs that the economy is looking up. I am very positive and optimistic on this and I think going forward we will definitely see that the slippage rate will come down.

Q: You had a difficult case on Bhushan Steel for a whole host of reasons but now that company wants to buy another company, will the bankers allow that?

A: I don’t have the information on this. I have also read in the papers as you have. My people will be getting in touch with them in order to ascertain what this is but at the end of the day we have to see whether they can do these things from their own means. There is no question of the bankers going overboard and supporting things which they cannot possibly take on at this point of time.

Q: At the moment, you also have the ability to convert loan to equity at much lower than market price and as well find a new buyer, change the management and keep the loan standard, should we hear a lot of these cases in Q1 -- the cases that we heard of change of management in the quarter gone by were not very heartening? In Pipavav, the promoter just walks away with the money that he gets from the new promoter and the banks get only Rs 160 crore, will things be better for the banks in the coming quarter?

In respect of other cases as well where we have seen sales of assets etc, we have ensured that all of the money comes into the company and that the borrowers do not walk away with whatever they can leaving the lenders high and dry. That has never been allowed and it will not be also.

Regarding this conversion of debt to equity, definitely it is another tool in the hands of the lenders but to see a lot of stuff happening in Q1, that is being overly optimistic.

However, while I wouldn’t say the first quarter is going to see a flurry of activity but definitely this is again as I said something that will strengthen our hands. Going forward, this will be another of the tools that we will use to ensure that the lenders are fully protected and that we can get back as much money from a company as we possibly can.