Storage tanks at the Torrance Refining Co. in Torrance, California, U.S., on Monday, Feb. 28, 2022. The U.S. and its allies are discussing a coordinated release of about 60 million barrels of oil from their emergency stockpiles after Russia's invasion of Ukraine pushed crude prices above $100. Photographer: Bing Guan/Bloomberg

Oil logged gains for a fifth month after another tumultuous period of trading that saw prices whipsawed by the fallout from Russia’s war in Ukraine and a resurgence of Covid-19 in China.

West Texas Intermediate futures climbed 4.4% in April, marking the longest monthly winning streak since January 2018. With the war entering a third month, Germany has signaled that it wouldn’t oppose a European Union embargo on Russian oil, but expressed skepticism that it’s the most effective means of damaging President Vladimir Putin.

China’s outbreak has added another source of volatility. The nation’s leaders pledged to boost economic stimulus to spur growth, but virus lockdowns have swelled oil stockpiles. The world’s top crude importer is on course to register the weakest demand since the early days of the pandemic.

Crude is rallying with demand concerns perceived to be short-term while supply concerns are persistent, said Rebecca Babin, senior energy trader at CIBC Private Wealth Management. “Next week will be critical as we will get official selling prices from Saudi as a good litmus test for how much demand is suffering in China.” 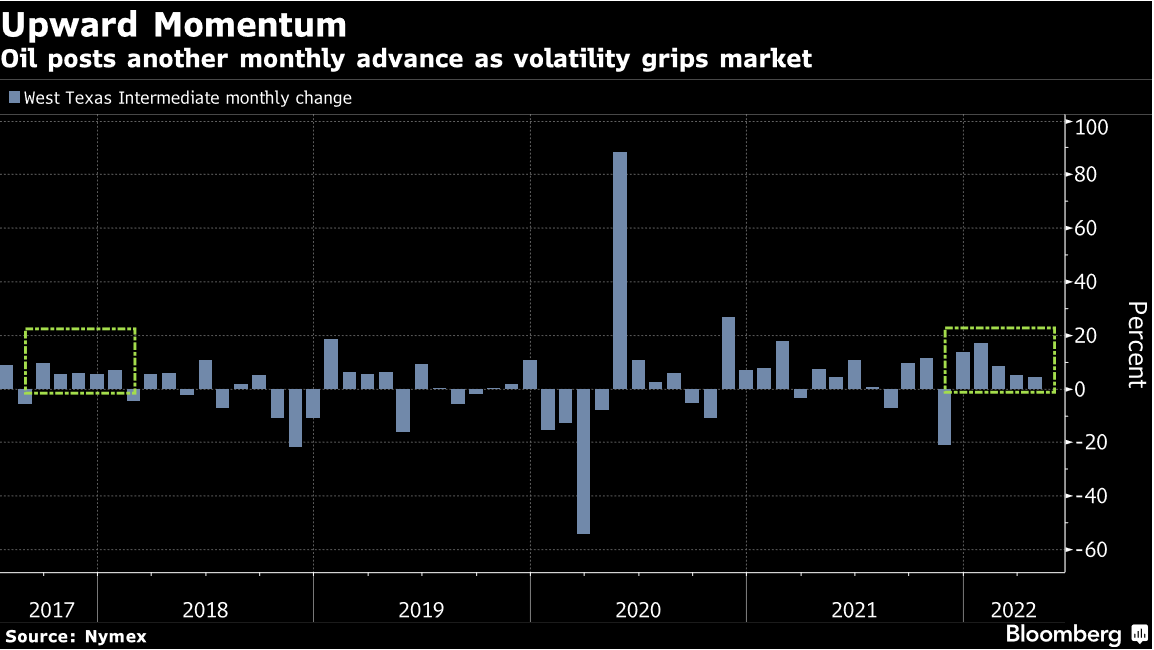 As the path toward a potential embargo on Russian oil has grown clearer, the oil market’s structure has firmed. On Thursday, West Texas Intermediate was trading in its widest backwardation -- a structure that indicates tight supply -- in a month.

In earnings news, Big Oil is among the biggest corporate winners from Russia’s increasing isolation nine weeks into its invasion of Ukraine. Exxon Mobil Corp. tripled its share-buyback program to $30 billion and Chevron Corp. said it will repurchase a record $10 billion of stock before the end of this year.

Meanwhile, diesel futures in New York jumped to a fresh record on Friday in data going back to 1986 ahead of the contract expiration. It’s become the world’s most in-demand fuel as buyers compete for supplies from U.S. Gulf Coast refiners that have stepped up to plug the gap left by Russia.