Gold prices gained Rs 193 to Rs 39,813 per 10 gram in the Mumbai bullion market snapping a five-day losing streak helped by rupee depreciation. Price was also aided by rising risk sentiment on US-China trade deal after US Treasury Secretary Steven Mnuchin said existing tariffs on China remain even if the trade deal is signed.

According to Navneet Damani, Vice President, Motilal Oswal, gold prices edged up in the previous session after a brief fall amidst the ease-off in the uncertainties. Ahead of the signing of an interim trade deal between the two countries, a top US official said tariffs on China would stay until a Phase 2 deal is completed. 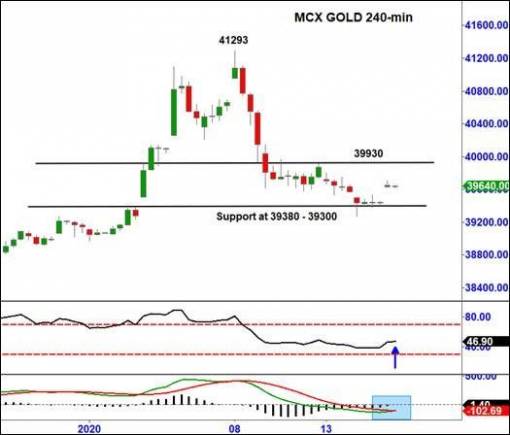 President Trump could consider easing tariffs if the two countries move quickly to seal a follow-up deal. Such updates pre and post-signing of the phase one deal scheduled today will be very important to watch for.

The gold/silver ratio that refers to the amount of silver required to buy one ounce of gold stood at 86.62 to 1.

The value of the February contract traded so far is Rs 1,945 crore and April contract saw the value of Rs 189.77 crore.

The gold price has been trading under the falling trend line channel, so the price is expected to trade negative. Sustaining below Rs 39,650 would drag price lower towards Rs 39,450-39,350, according to Axis Securities.

The precious metal has seen a gap-up opening intraday after a five-day sell-off. Price remains to trade under pressure in the coming days on the back of easing tension between the US and Iran.

The brokerage firm said spot gold has intraday support at $1,530 whereas resistance is at $1,575.

At 12:21 pm (GMT), spot gold was up $5.39 at $1,551.51 an ounce in London trading.Get access to India's fastest growing financial subscriptions service Moneycontrol Pro for as little as Rs 599 for first year. Use the code "GETPRO". Moneycontrol Pro offers you all the information you need for wealth creation including actionable investment ideas, independent research and insights & analysis For more information, check out the Moneycontrol website or mobile app.