Commodities on the boil

Commodities are careering into a second half that promises as much turmoil as the first, with the world facing an escalating energy crisis, copper plunging on Fed-fueled recession fears, and Russian President Vladimir Putin delivering a shock for Shell Plc.

Russia’s move to reshuffle ownership of the Sakhalin-2 gas plant spells trouble for Shell’s plan to offload its stake. An analyst in Japan warned it “could even trigger a panic” in liquified natural gas markets  -- although Moscow said Putin’s decree isn’t a threat to supplies, and isn’t nationalization.

Energy crises and central bank moves to crush inflation present powerful headwinds across markets, underscored by copper’s collapse Friday below $8,000 a ton. Next week’s minutes of the last Federal Reserve meeting should give more detail on the bank’s thinking. There’s also the United Nations’ annual report on food security, which comes ahead of an important month for the war-torn wheat market.

Just as Europe’s fears over Russian gas supplies reach fever pitch, the man in the Kremlin unleashed another energy surprise. Putin delivered a bombshell for foreign investors in Sakhalin-2, including Shell as well as Japan’s Mitsubishi Corp. and Mitsui & Co. Rights to the project will be vested in a new Russian company, with zero compensation for those who opt out. What exactly this means isn’t yet clear. But the move threatens to complicate Shell’s efforts to sell its 27.5% stake, and casts a cloud over the future of gas supplies to Japan, which depends on Russia for about 9% of its imported LNG. Expect to hear more on how Japan might go about replacing Russian gas imports -- a task that’s made tougher because Europe is doing the same.

European gas and power markets are in turmoil and the energy crisis has barely begun. The single biggest risk in coming weeks is that the Nord Stream pipeline -- Europe’s key channel for gas from Russia -- is not restarted after 10 days of maintenance that begin July 11. Regardless of the outcome there, Europe’s politicians are under intense pressure to act immediately to avoid even deeper troubles when winter arrives. 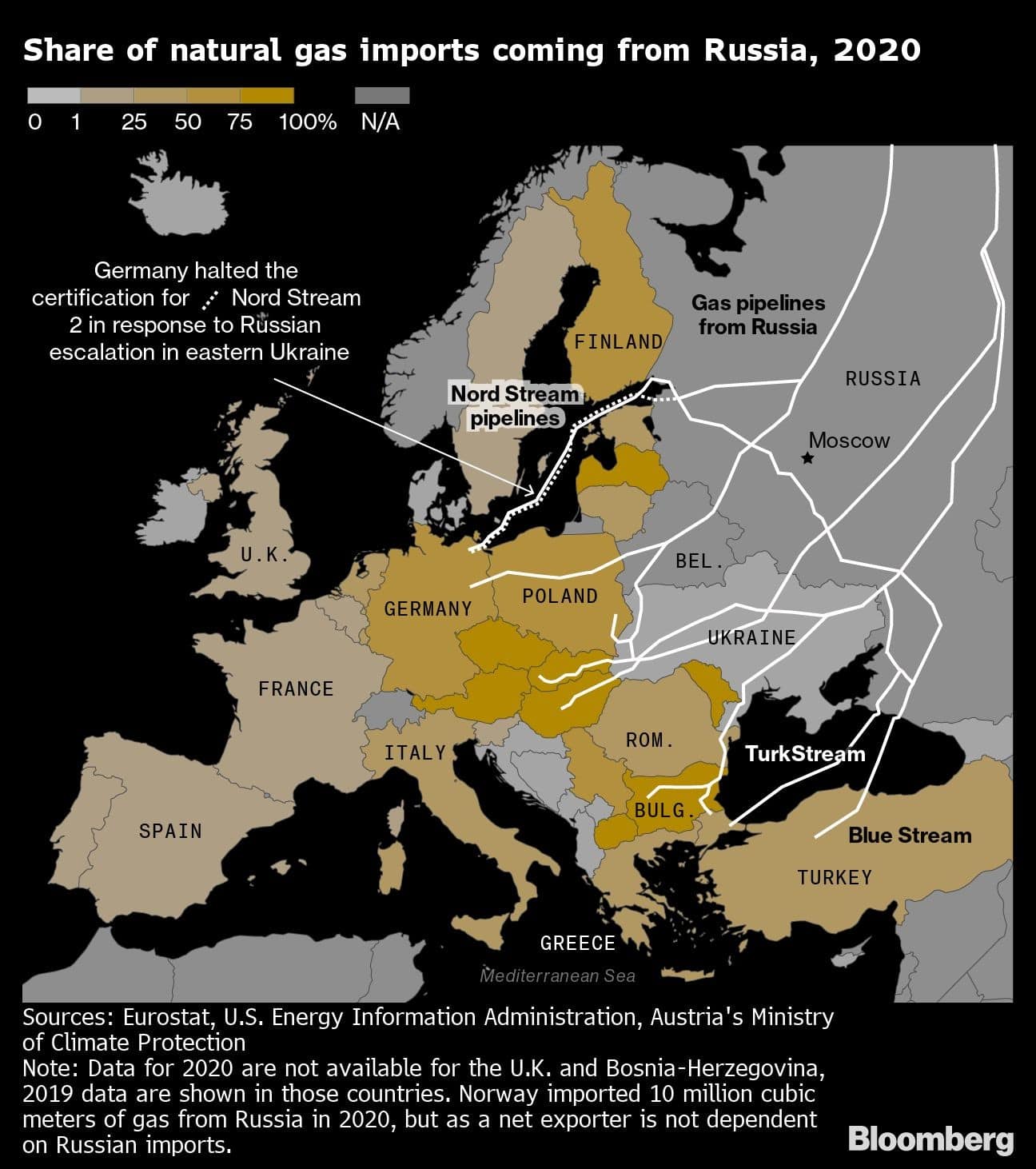 The focus remains on heavy consumer Germany, which already raised its gas risk level to the second-highest “alarm” phase, tightening monitoring of the market and rebooting some coal-fired power plants. The next step could be more stringent steps to spur demand destruction. Allowing utilities to pass on higher costs to customers would speed rationing of supplies, but that’s an option Economy Minister Robert Habeck has so far resisted.

If copper really is a barometer of the world economy, we should be getting worried. The metal used in electrical wiring just tumbled below $8,000 a ton for the first time since early 2021. The gathering drumbeat of warnings about a global recession is weighing on all metals, and China’s tentative recovery has so far prompted a collective shrug from investors. 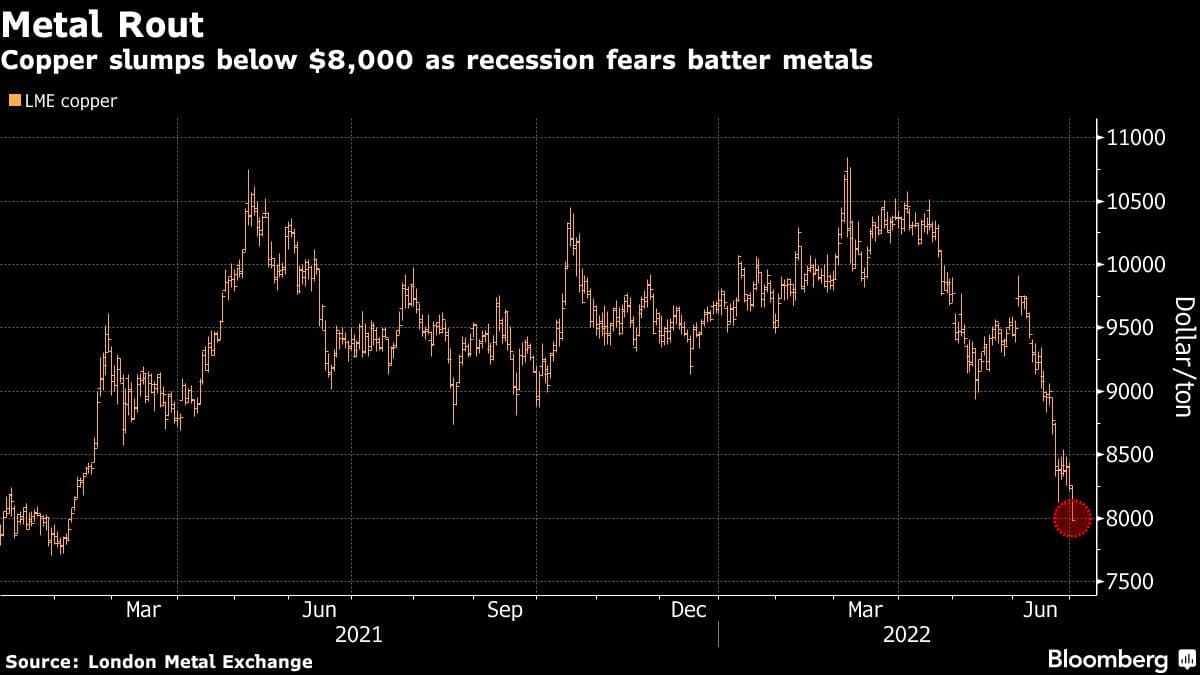 What next? Some steady, non-surprising data from major economies should help steady nerves. Investors will also scrutinize the Fed minutes on Wednesday for clues on what their July meeting might bring. But there’s not much in the short term that bodes well for copper, with the major risks pointing downward: further escalation in Europe’s energy crisis could trigger a deeper sell-off in coming weeks and put $7,500 a ton in view.

Oil just capped its first monthly drop since November on fears of a global downturn, but despite that the supply situation remains tight. The two big questions hanging over the market are whether OPEC+ can ramp up production any further after completing the return of supplies halted during the pandemic, and whether demand destruction will kick in. President Joe Biden will be hoping for a resounding yes to the first question when he visits the Middle East later this month, but there’s skepticism that the Saudis can pump at higher rates for an extended period.

Saudi Aramco will likely release its official selling prices for August early next week, which will provide an indication on its outlook. Refiners and traders surveyed by Bloomberg are expecting another increase. In the US, the extent to which Americans jump in their cars and hit the highways over the long Independence Day weekend will be of interest. Gasoline demand on a four-week rolling average is at the lowest since 2014, excluding virus-ravaged 2020, so look out for whether that demand destruction persists.

“We in grains have never traded a war market before, so this is all new,” said one trader as wheat harvests begin in the Northern Hemisphere. This month will test how much wheat can get to market with Ukraine’s supplies still severely constrained. Wheat and corn futures have returned to levels last seen before Russia’s invasion, possibly helping to tame the surge in grocery bills from Kenya to the UK and the US. The UN’s monthly snapshot of global food costs is due Thursday. 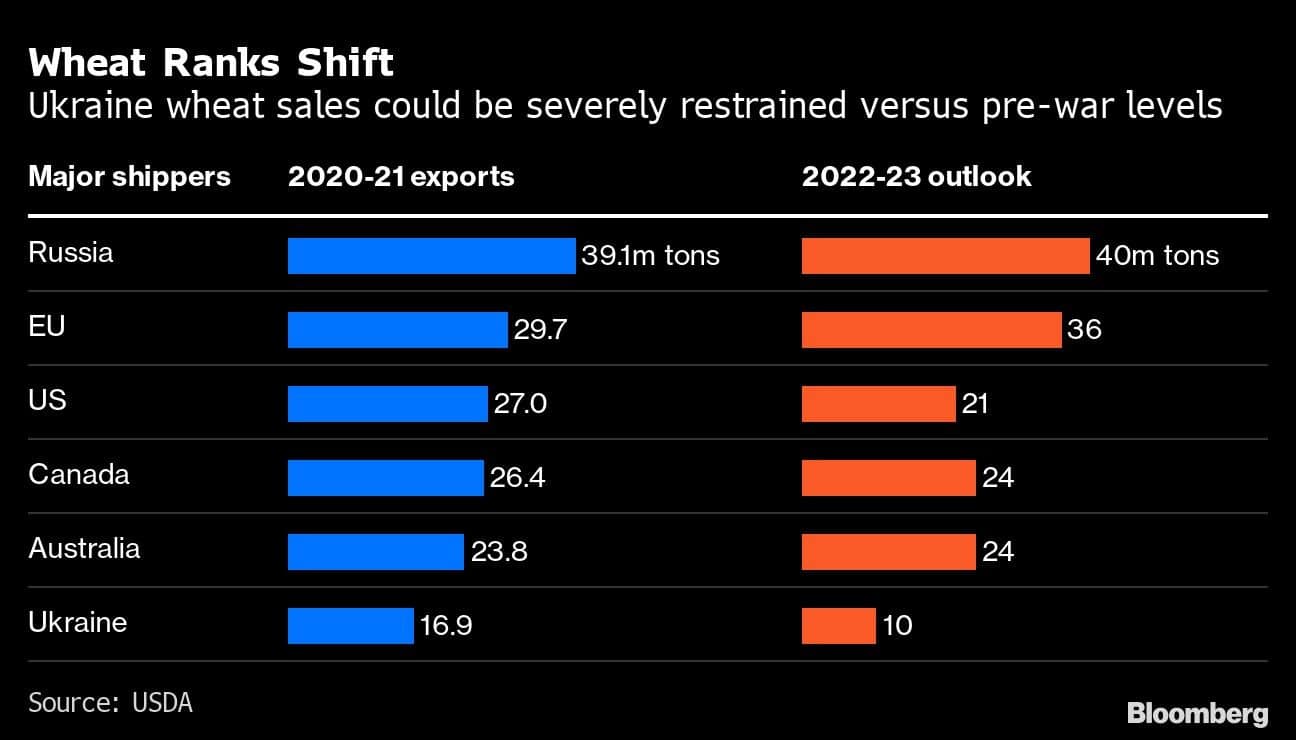 Even with the downturn, prices remain at lofty levels, straining budgets of importers and lower-income nations. Also from the UN, an annual food-security report arrives Wednesday, detailing the latest assessments of global hunger. The situation was already worsening before the war, and tens of millions more could lack enough to eat this year, the World Food Programme has warned.
Bloomberg
Tags: #Commodities #food crisis #inflation #metals #Russia #US
first published: Jul 2, 2022 12:35 pm