While Nirmala Sitharaman’s immediate predecessors - the late Arun Jaitley, P Chidambaram, Pranab Mukherjee - faced many economic headwinds during their time, the enormity of the challenges faced was perhaps not even close to what she sees in front of her right now.

A pandemic which damaged the global economy, the deepest quarterly contraction in Independent India’s history, the first annual contraction in four decades, the second highest number of COVID-19 cases worldwide, millions of jobs lost, a severe loss of activity across sectors, and slow recovery in others.

This is the reality facing Finance Minister Nirmala Sitharaman who is going to present the Union Budget 2021-22 in the Lok Sabha on February 1. There will be a single-point agenda behind all her announcements, sops and measures: Reviving and restarting India.

That end-goal, and the trails that the government has to navigate to get there, encapsulates why this may be the most significant budget presented by any administration since the 1991 budget presented by Manmohan Singh. While Sitharaman’s immediate predecessors - the late Arun Jaitley, P Chidambaram, Pranab Mukherjee - faced many economic headwinds during their time, the enormity of the challenges faced was perhaps not even close to what she sees in front of her right now.

As India came out of the nationwide lockdown last year, economic activity gradually started picking up, and some key indicators, by September and October, had either matched or surpassed comparable data from 2019-20. However, analysts warn that a lot of the recovery was due to pent-up demand, and that the economy is not out of the woods yet, something evidenced in the November industrial output data.

India has escaped the global trend of COVID-19 cases rising along with increased mobility, as here active cases have come down even as the economy has opened up. Most banks, ratings agencies and institutions have revised downwards their GDP contraction forecast for FY21, and some like the International Monetary Fund (IMF), see India as the fastest growing major economy in FY22.

However, getting there won’t just be a matter of low-base effect and an organic pick-up in activity. It will have to be backed up by concrete measures in the budget. Here is what we know so far

Job-creation and demand boost remains the Narendra Modi government’s biggest challenge right now. While many have counseled the Centre to expand NREGA and introduce an urban jobs programme, policymakers seem to be more inclined to create jobs through a massive infrastructure and public investment programme. To this end, Sitharaman is likely to announce record capital expenditure outlay by the government, and also may spell out details of a development finance institution.

The budgeted capex for FY22 could easily cross Rs 6-7 lakh crore. For FY21, the Centre had budgeted its own capital expenditure at Rs 4.13 lakh crore, that has been increased by Rs 35,200 crore. 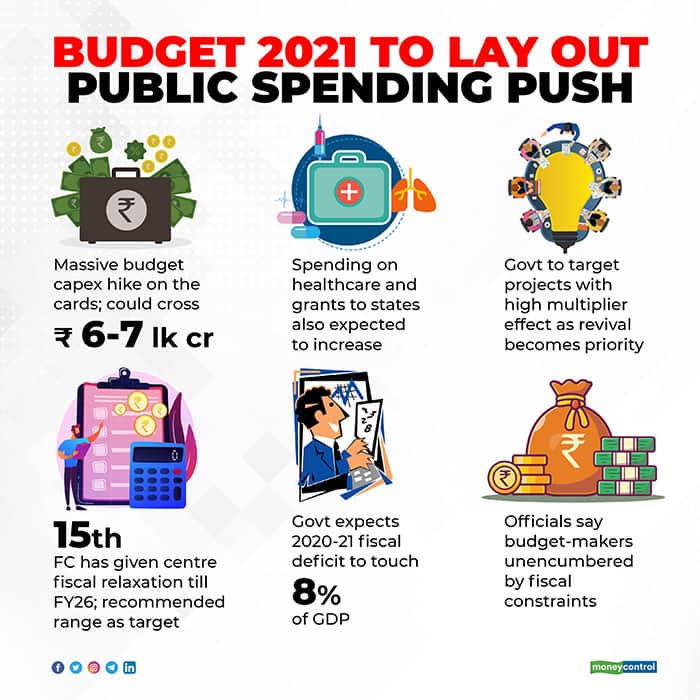 An increase in capex, coupled with still weak tax revenues, will lead to fiscal expansion. It now seems very clear that the existing medium-term fiscal deficit target of 3 percent, as mandated by the Fiscal Responsibility and Budget Management Act, no longer holds.

From an expected fiscal deficit of 7-8 percent of GDP in FY21, the Centre may follow a glide path which will bring down the budget deficit to 4 percent of GDP by FY26. It is understood that this relaxed fiscal roadmap has been suggested by the Fifteenth Finance Commission. The Commission, whose report for FY22 to FY26 will be tabled in Parliament along with the budget, may have also recommended a fiscal deficit target range for each year of its award period, till FY26, instead of a single number. 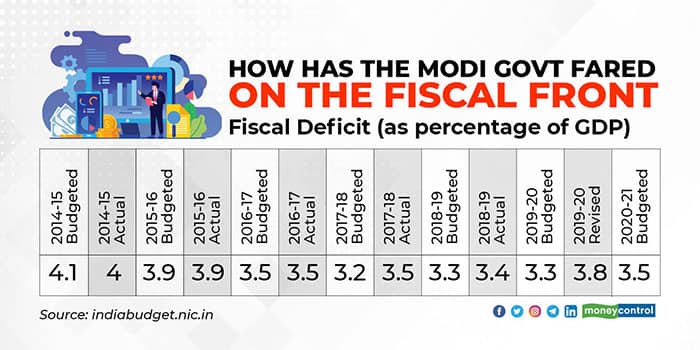 Providing resources to battle the COVID-19 pandemic remains an important priority for the budget-makers. To that end, there could a massive one-time provisioning in the budget for COVID-19 related expenditure, especially with the world’s largest vaccination drive underway in India. There could also be a substantial increase in the health budget, as well as health-related grants to states.

It was the small businesses which bore the brunt of the economic slowdown in the wake of the pandemic. While large corporates have bounced back to some extent, smaller businesses still face many headwinds. Sitharaman is expected to announce a number of measures to benefit micro, small, and medium enterprises (MSME). These could include tax breaks, sops to expand and hire, as well as easier asset classification norms in case of loan defaults.

There are tax breaks expected for the middle class and salaried class as well. Indians have saved up to record levels in 2020. The aim of the government will be to push the demand side and get them to spend in 2021.

Even with a strong economic recovery expected in FY22, tax revenues may still not be anywhere close to the budgeted targets, as evidenced even before the pandemic. It is expected that the Centre will depend heavily on non-tax sources of revenue, especially privatization.

The government is cautiously optimistic that it can privatise companies like Air India, Bharat Petroleum, Concor, Shipping Corp, NINL and Pawan Hans in the coming fiscal, after many of these plans were postponed due to the pandemic. Sitharaman is also expected to give the details of the proposed strategic sector policy. Beyond these expected measures, the budget will be keenly followed, and the Finance Minister’s words intently listened to, for bold and reformist announcements, and more importantly, the economic vision of the Modi government. It will be the clearest indicator of how the Centre plans to steer the economy out of an unprecedented event, and into the path of sustained 8 percent plus growth over the medium term.

The words ‘tryst with destiny’ are from the independence speech of India’s first Prime Minister, Jawaharlal Nehru. Manmohan Singh had his tryst with destiny in 1991, when his budget set the groundwork for liberalization and economic boom.