PowerShock | Banks come to the rescue of the power sector, again!

Once bitten, twice shy. The adage doesn’t seem to hold true for Indian banks, which are preparing once again to rescue the troubled power sector.

India’s power demand hit an all-time high of 207.1 gigawatts (GW) on April 29, driven by a spike in demand from households and a pick-up in industrial use.

The demand-supply mismatch has narrowed, but the worry is that if power plants do not stock up enough coal before the monsoon, a bigger problem may loom later in the year.

The government has responded with a slew of measures to boost power generation.

On the face of it, the plan sounds simple– address coal supply constraints by supplementing domestic production with imported coal, bring power units that are shut or running at low capacity to run at full volume and get power distribution companies, or discoms, to pay their dues on time to ease cash flow in the power sector value chain.

The only hiccup is that all these measures hinge on how rapidly funds can be made available to the discoms, and that’s where banks come into the picture.

The government has asked all imported power plants fuelled by imported coal to run at full capacity by invoking Section 11 of the Electricity Act, given the “extraordinary circumstances.”

Section 11 states that under such circumstances, the government can ask power generating companies to operate and maintain output in line with its orders.

The government’s hope is that imported coal-based units that have shut down because of high prices of the fuel and stressed power assets will resume generation and potentially add 8,000 megawatts (MW) of capacity.

Given the huge demand, lenders have identified some stalled power projects that were shut for lack of working capital and can be reopened through a placement of debt.

Banks are even thinking about providing priority funding to power plants that are functional but some loans of the generating company have turned non-performing.

This may pose a question of moral hazard because banks would be extending loans to defaulters. But this also is the quickest and surest way to get the power plants to start operating within a period of six months. The present scenario warrants credit extension to ailing companies in the power sector, bankers say.

“For the last 8-9 years almost, there have been no new major power projects. We were focusing more on renewable energy but definitely renewable energy cannot be totally supplementary to thermal power,” Partha Sengupta, managing director and chief executive officer of Indian Overseas Bank, told Moneycontrol.

“The government has rightly taken the strategy and all the banks have been asked to support the stalled power projects so that they can be put into operation…with a little bit of support, either with the fuel supply or with the power supply agreement, this can be brought into operation,” Sengupta said.

“Presently the intent is that existing power plants which are fully set up but shut due to some financial reasons, they have to be started back and those power plants that were near to completion, say plants where most of work is completed and small amount of work is left, these kind of plants have to be started back. The economic value has to be derived from the asset which has been created, it should not be wasted by lying idle,” he added.

As India celebrated the fact that it increased its total power capacity by a third to 320 gigawatts (GW) in just three years until FY17, the banking sector was staring at an increase in toxic loans.

Gross Non-Performing Assets (GNPAs) of banks pertaining to power sector exposures would be at 6.5% of total loans given to the sector as on September end, reckoned Krishnan Sitaraman, senior director and deputy chief ratings officer at CRISIL.

Latest data from the Reserve Bank of India’s (RBI) sectoral deployment of credit also points to a recovery in loan demand from the power sector.

According to the data, banks’ loans to the power sector stood at nearly Rs 6.1 lakh crore as of March 25, up 7.2% year-on-year (YoY). This represents 5.1 percent of outstanding bank credit. During FY21, credit to the power sector decelerated 0.3 percent, the data showed. 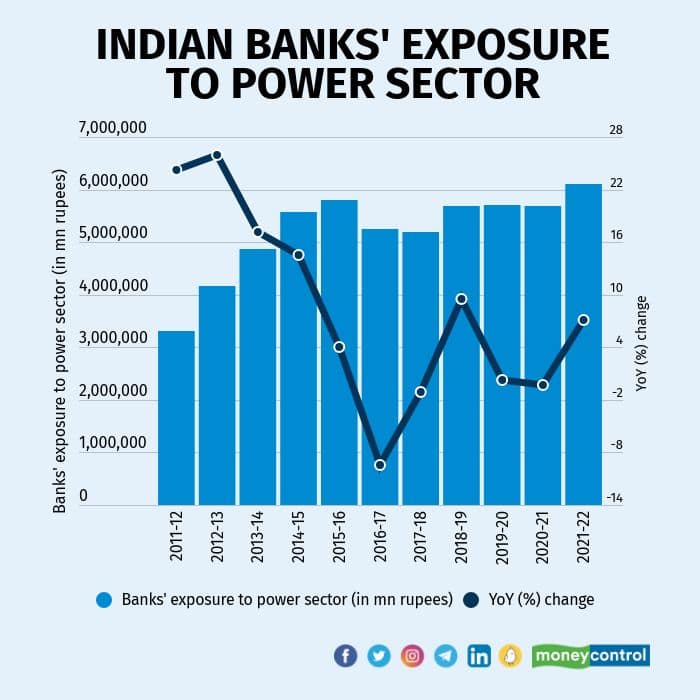 The power sector confronts legacy issues of non-payment of dues.

LPSC, which is levied on the payment owed by discoms to  power generators, alone ran up to Rs 6,839 crore.

The power ministry, in the backdrop of the crisis, is working on a separate scheme to mitigate the financial woes of the discoms that are unable to pay their dues, it said in a statement on May 25.

A one-time relaxation is being considered for all discoms wherein the amount outstanding will be frozen without further imposition of late payment charges.

The discoms will be given the option of paying the outstanding amount in up to 48 instalments, which will help them shore up their finances, the ministry said.

Power sector entities are awaiting more clarity on how this new scheme will be rolled out and how it will be funded.

Even as bankers work to meet the short-term working capital requirements of power companies, a senior banking analyst said banks will be cautious about growing their exposure to the sector.

Some of the banking industry’s biggest non-performing assets (NPAs) and defaults have come from the power sector, including Bhushan Power & Steel, Jyoti Structures and IL&FS Group companies.

The analyst cited above said the Reserve Bank of India (RBI) will likely raise concerns over lending to a defaulting entity. An e-mail sent to the central bank requesting a comment for this story did not elicit a response.

The power sector has been one of the biggest contributors to the banking sector’s NPAs, said Shabbeer Ahmed, partner at the law firm IndusLaw. On average, banks and financial institutions sacrifice about 60 percent to 80 percent of their outstanding dues in resolving stressed assets in the power sector, he said.

“Definitely the focus is on solar and renewable power projects. That continues. Almost all banks and we are also there in many projects, we have taken exposure. That will continue,” Sengupta of Indian Overseas Bank said. A senior ex-banker with a large public sector bank said the present power crisis is on account of higher imported coal prices and unless the government provides them a subsidy, companies will not be able to afford operations and their accounts will remain in default.

And until the fundamental challenge of delayed payments is addressed, power sector companies will continue to suffer working capital shortages.

“That is a broader challenge. Presently the issue is power shortage because of huge demand, summer season and economic revival. To address that, these measures are being taken,” Karnatak of Union Bank of India said.

Union Bank of India is not the lead banker in any stressed power sector account, but whenever it receives an application to take the lead role,  the lender’s internal committee will examine it before it sanctions the funds, Karnatak said.
Piyush Shukla
Tags: #Banks #coal #NPAs #power sector #thermal project
first published: May 31, 2022 12:48 pm