Analysis: UDAN yet to truly take off as several routes remain non-operational

The regional connectivity scheme, which envisions connecting Bharat to India, has no doubt helped people travel. But as with many other government schemes, the last thrust to make it a total success is lacking

Last week, a DHC-6 Twin Otter seaplane of the airline Maldivian, which was wet-leased by Spicejet to operate the Sabarmati-Kevadia route, started its return journey to Maldives. Officially the aircraft has been withdrawn from service and flown to the island nation for maintenance due to the lack of wet and dry dock facilities at Ahmedabad. Time will tell if the aircraft or another one returns to service and the route is re-started. This was the first seaplane service in India under the Regional Connectivity Scheme (RCS)-UDAN (Ude Desh ka Aam Nagrik).

As of the last week of November, 299 RCS-UDAN routes have been operational proclaims the data released by the Airports Authority of India. These form part of the first three phases of UDAN. The fourth phase was awarded recently and none of the routes has started yet.

An analysis shows that only 207 routes are currently operational. UDAN 3.0 had seen 235 routes being won across airlines, while 325 routes were awarded under UDAN 2.0. These numbers show the dismal performance of the scheme, which is the pet project of the prime minister.

Only 56 routes started in phase 1, of which 16 are not operational, while phase 2 and phase 3 have 48 and 28 non-operational routes. A large proportion of these routes are those that were started by Spicejet and later withdrawn, followed by IndiGo, India’s largest carrier by fleet and domestic market share. Alliance Air, Air India’s subsidiary, which has largely been operating RCS-UDAN routes, comes in third with the count of routes started but not operational right now.

To be fair, there are certain routes where the situation is beyond the control of the airline. Take, for example, the case of Pakyong, the much celebrated airport near Gangtok and the only airport in the State of Sikkim; Spicejet launched flights from Kolkata and followed up with flights from Guwahati, both under RCS-UDAN. However, difficult weather most of the time led to repeated diversions to nearby Bagdogra or cancellation of the flight. In an environment where making money is difficult, the additional expenditure of transporting passengers to Pakyong from Bagdogra can be a deal breaker. With Jet Airways suspending operations, all its 10 routes were non-operational. Recently Spicejet took over some of its routes and launched Nashik with flights from Hyderabad, Bengaluru and New Delhi, one of the destinations to which Jet Airways operated under UDAN.

While the government started the unlock process with a cap of 33 percent on capacity in domestic aviation, the cap has been increased to 80 percent now. However, since the beginning, flights under RCS-UDAN were kept out of the purview of this cap and so was their pricing.

The Central government has enforced an upper and lower price cap for flights. Initially set till November, this price cap has now been extended to the end of February 2021. However, UDAN flights have their own pricing mechanism and do not come under this pricing cap.

While some route cancellations can be attributed to the lockdown and economic impact, this isn’t the case with all routes that have become non-operational. 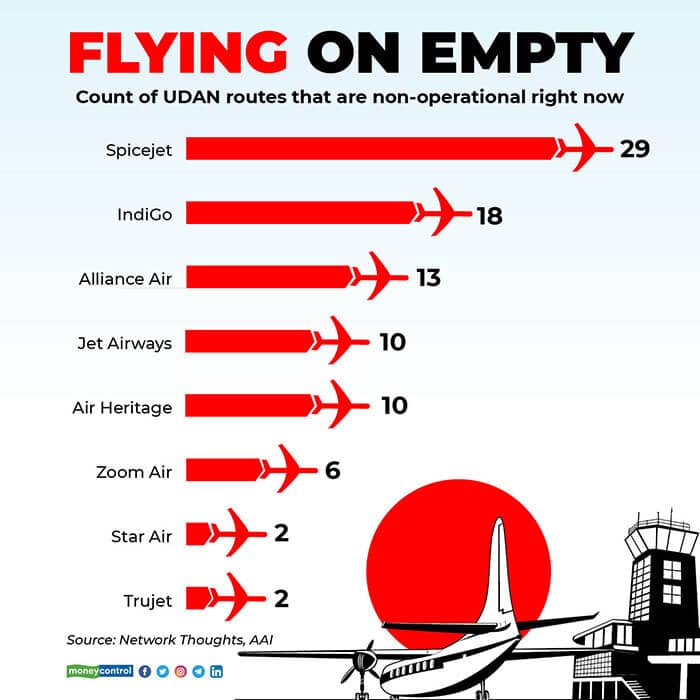 Air Heritage has joined the likes of Zoom Air in not operating any flights as was evident in the data released by regulator DGCA for the last few months.

From re-carpeting to State regulations, there are multiple factors that affect planning, routing and deployment of an asset for an airline. But for a scheme that is so close to the heart of the Prime Minister, with efforts being made to promote ‘Hawai chappal in hawai jahaj’, measures should be taken to operationalise routes that started but were withdrawn. There should also be an analysis of why bids are being invited without previous routes being started.

The RCS-UDAN scheme, which envisions connecting Bharat to India, has no doubt helped people travel. But as with many other government schemes, the last thrust, to make it a total success, is lacking.
Ameya Joshi runs the aviation analysis website Network Thoughts.
TAGS: #aviation #RCS #UDAN
first published: Dec 8, 2020 12:22 pm