Ten-year Treasury yields -- which are currently around 3.75% -- has traded at 4% or higher for 23 days so far in 2022--- all occurring since late September. Before that brief stint -- which came as traders ramped up Fed hike wagers -- the yield hadn’t touched that level since early 2010.

The US benchmark bond yield will trade at 4% or higher through at least the end of 2024 as the Federal Reserve averts an economic contraction in its fight against inflation, according to Goldman Sachs Group Inc. 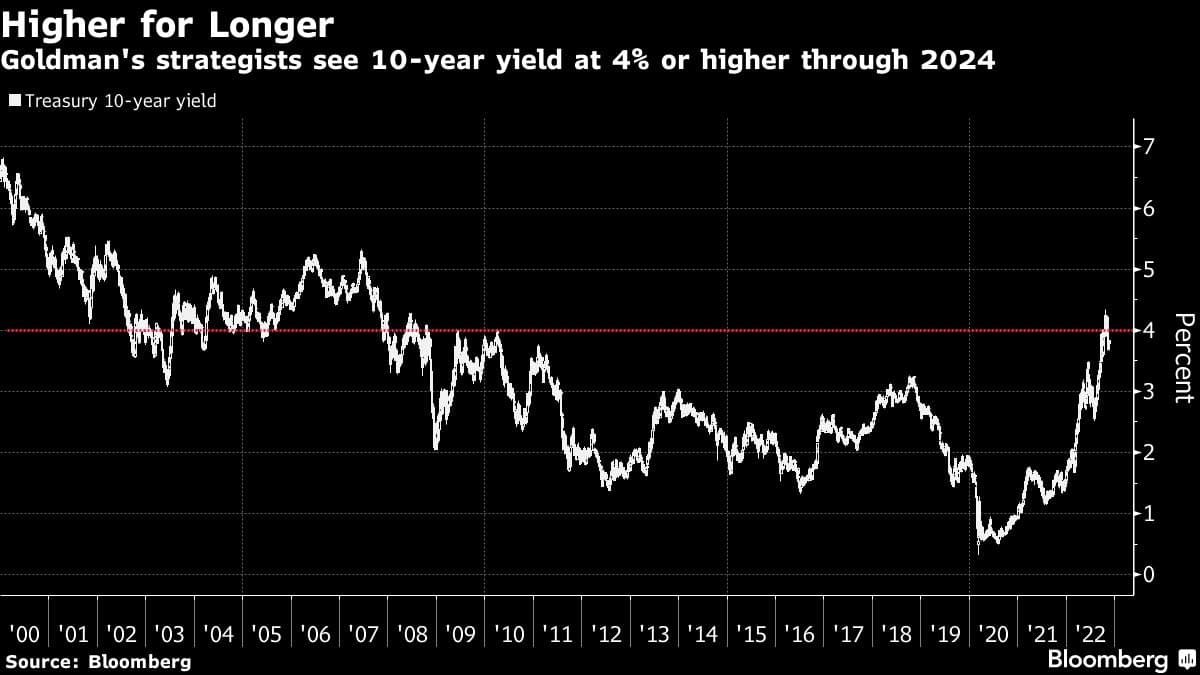 Ten-year Treasury yields -- which are currently around 3.75% -- has traded at 4% or higher for 23 days so far in 2022--- all occurring since late September. Before that brief stint -- which came as traders ramped up Fed hike wagers -- the yield hadn’t touched that level since early 2010.

Swaps traders are betting officials will lift the benchmark rate to a peak of just slightly over 5% around June -- and then bring it down to about 4.6% by the end of 2023. The current level of the target rate sits in a range between 3.75% and 4%.

Here are Korapaty’s quarterly forecasts for the 10-year yield:

San Francisco Fed President Mary Daly and her Cleveland counterpart Loretta Mester said during separate remarks Monday that inflation remains too high and policymakers have a way to go before completing their tightening campaign.

The yield on 10-year note has retreated in recent days given the growing speculation of a downshift in the pace of Fed rate increases. It hit 4.34% on Oct. 21 -- it’s highest since 2007.

“Inflation will remain somewhat above the Fed’s target over the next few years,” Korapaty said. “So our yield forecasts are also a reflection of our view that inflation will be somewhat structurally higher. This cycle is different, not like those we’ve seen in the last 30 years.”

Even as yields will remain stuck near fairly high levels, the total return for bond holders is to be slightly positive given debt now offers higher fixed semi-annual payment streams, Korapaty said.

That could help the now beleaguered investor portfolio structures like the popular 60/40 split between equities and high-quality bonds. The strategy has lost about 16% this year, according to a Bloomberg index.

“Next year, with the repricing we’ve had so far, it’s created enough room for the balanced portfolio to sort of work,” Korapaty said. “It doesn’t mean we are going back to the heyday of those portfolios –- such as the 60/40 or the risk-parity portfolios -- because the skew of risks on the inflation front are still not the same as it was in the last 30 years. But we are moving back toward that old regime.”