The research firm lays out the stakes and calls for action in its seventh annual Long-Term Electric Vehicle Outlook, released Wednesday.

Electric vehicle sales are poised to more than triple by 2025, and yet governments and manufacturers need to lean even harder into eliminating emissions from road transportation by the middle of this century, according to BloombergNEF.

The research firm lays out the stakes and calls for action in its seventh annual Long-Term Electric Vehicle Outlook, released Wednesday. BNEF’s analysts deem EVs “a remarkable success story,” predicting plug-in passenger vehicle sales will soar to 20.6 million in 2025, much higher than its 14 million forecast just a year ago, mainly due to faster uptake in China.

Yet for all the progress, replacing the 1.2 billion passenger vehicles on the road that run on internal combustion engines takes time. Just over two-thirds of the global fleet will be zero-emission by 2050, if no new policies or regulations are enacted. Heavier commercial vehicles are on track to trail far behind, with only 29% of the fleet decarbonizing on that timeline.

“Despite the rapid rise in EV adoption, road transport is still not on track for carbon neutrality by 2050,” analysts led by Colin McKerracher, BNEF’s head of advanced transport, write in the report. “Aggressive action from policymakers will be required, especially on heavier vehicles where both batteries and hydrogen fuel cells are vying for a place in the market. The window to stay on track for net zero is closing quickly.” 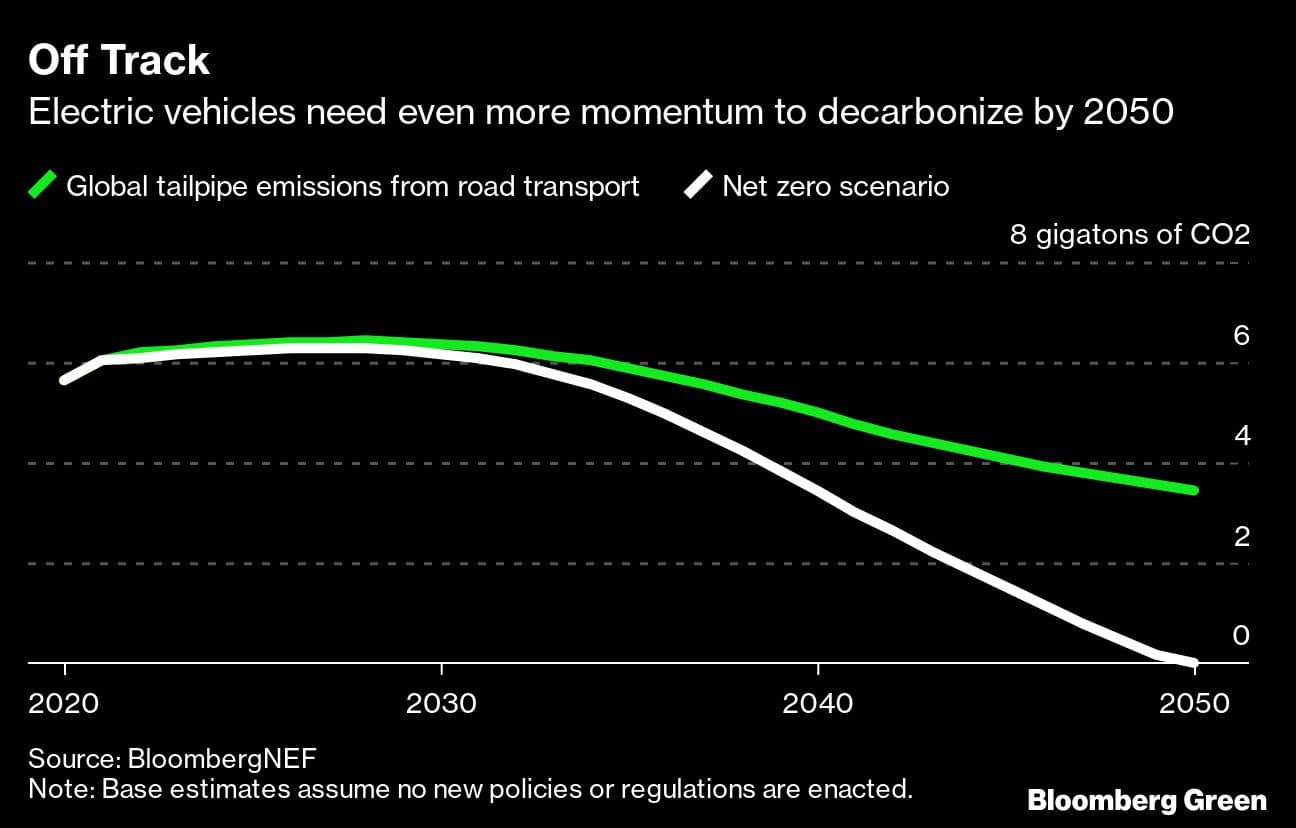 The 201-page report covers the gamut of opportunities electric vehicles present, the impact they may have and the risks they face. It also highlights how governments can make the challenging transition easier by combatting car dependency. If the amount of miles traveled by passenger vehicles and size of the fleet is just 11% lower than what BNEF is modeling for 2050, it would spare the world 2.25 gigatons of cumulative CO2 emissions and reduce the strain on battery supply chains.

With EVs attracting growing consumer interest, worldwide sales of internal combustion engine vehicles peaked in 2017 and are now in permanent decline, according to BNEF. The global fleet of combustion cars on roads will start to shrink in 2024, and by the following year, deliveries will have dropped roughly 19% from their high point.

In their place, all types of EVs — two- and three-wheelers, buses, passenger and commercial vehicles — are together already displacing 1.5 million barrels of oil a day, and should displace almost 2.5 million barrels daily by 2025. BNEF expects gasoline demand to peak in 2026, and total oil demand from road transport to crest the following year. 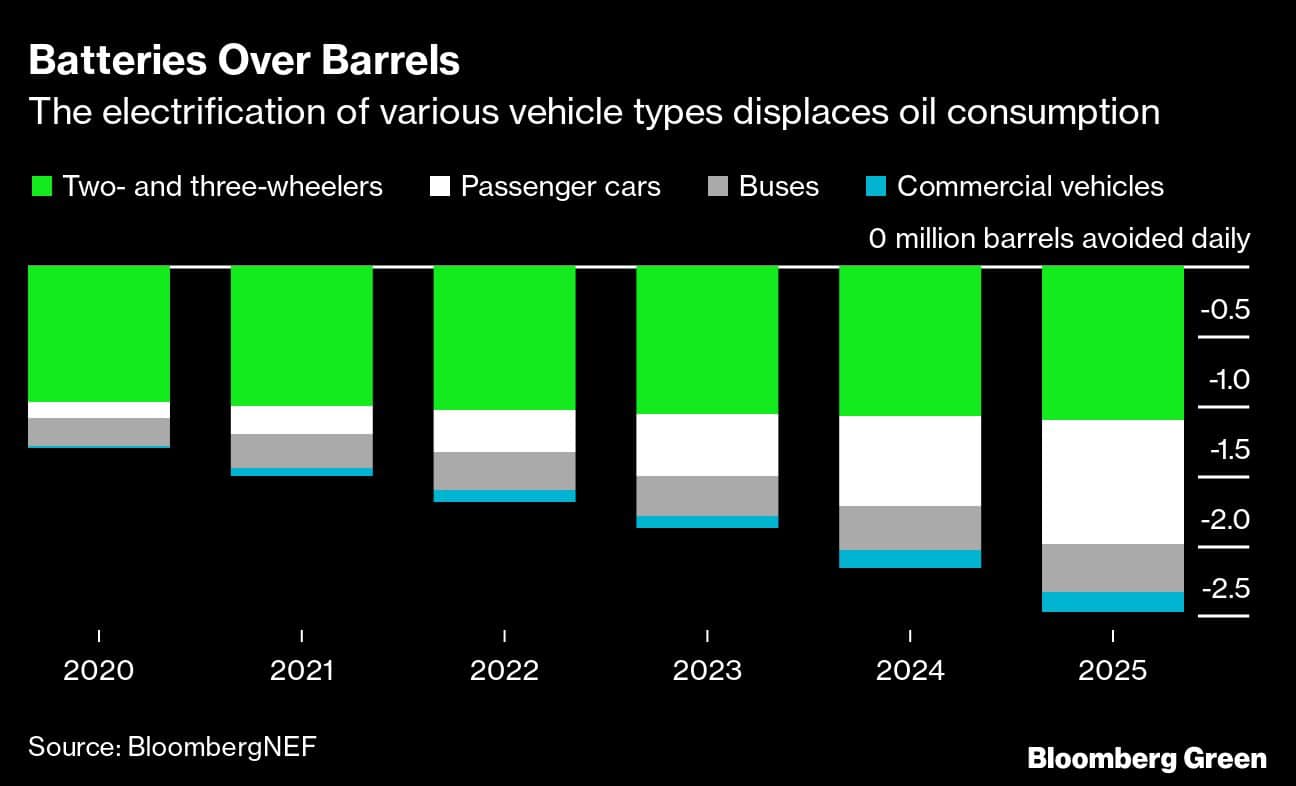 EV penetration is also moderating the rise in road transport emissions from the trough reached during the first year of the pandemic in 2020. Still, the amount of CO2 emitted is poised to rise for two years after oil demand peaks, due to additional emissions from power plants supplying electricity to the fleet.

In its scenario forecasting how transport will transition if the industry is left to economic trends and market forces, BNEF sees Germany, the UK, France and China coming close to fully phasing out combustion vehicle sales by 2038. The US, Japan and Australia would have catching up to do, while India, Southeast Asia and the rest of the world are even further back.

The researcher outlines a number of policies authorities should implement to move toward a net-zero emission trajectory. Across all segments, governments should set a no later than 2035 phase-out date for sales of new combustion vehicles. Fuel-economy and battery-recycling standards ought to be stricter, and policy makers may want to consider shifting some subsidies to supporting the build up of charging networks. BNEF flags a number of concerns including the growing gap in EV uptake between wealthy and emerging economies, insufficient charging infrastructure and the potential for tight supply of battery raw materials to raise vehicle sticker prices. The researcher singles out countries and regions including India, Southeast Asia, Mexico, Brazil, Turkey and Russia for slow EV uptake.

“Without additional policies in those countries, the net-zero trajectory will remain out of reach for global road transport,” the analysts write. “Air quality in urban areas is already markedly different between wealthy and emerging economies, and this gap will widen further” unless EV adoption improves. 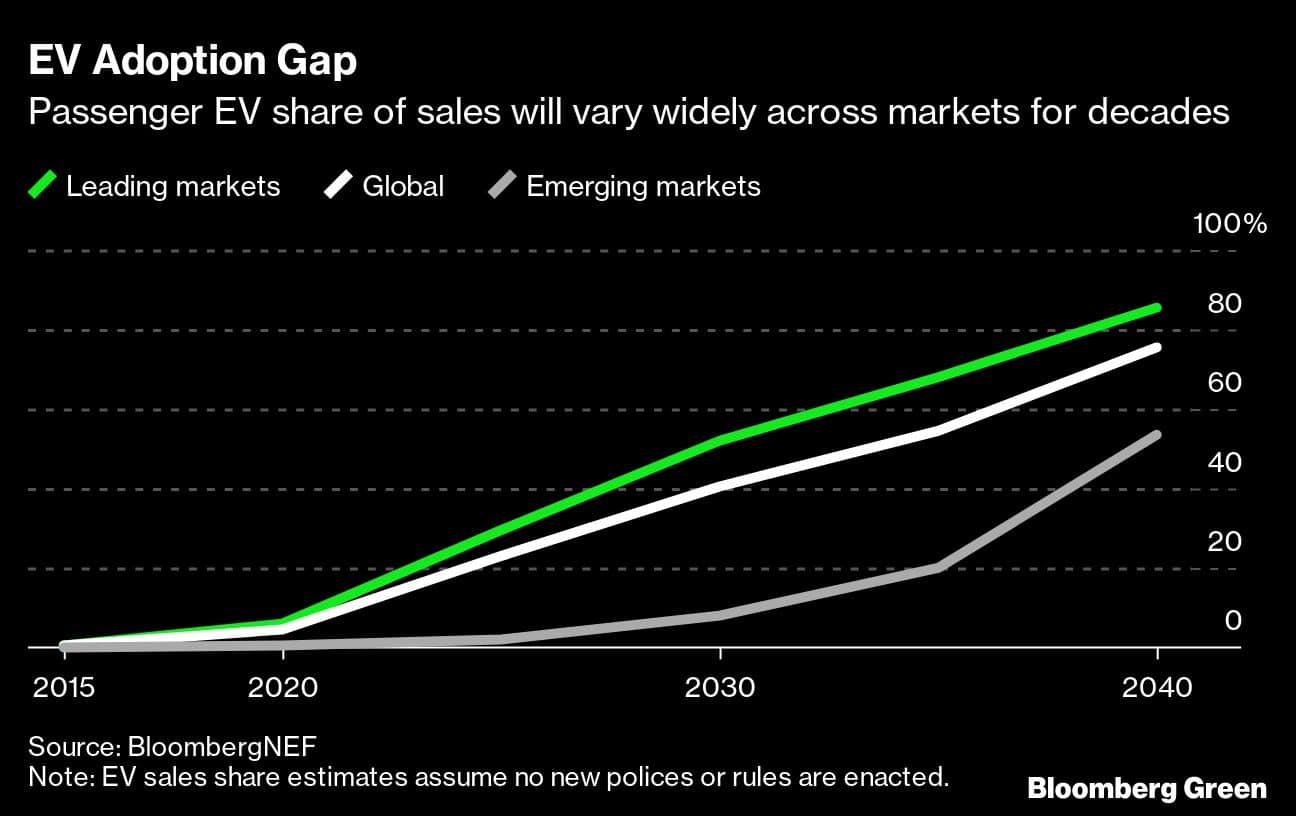 Under BNEF’s net-zero scenario, $1.4 trillion of investment will be needed to build out charging infrastructure by 2040. It will be a challenge scaling up networks quickly enough to keep pace with EV uptake, especially in the US, where average annual public charging installs need to increase sixfold in the next four years.

On the battery front, BNEF sees little slack in supplies of lithium, cobalt, manganese and nickel — the key EV battery ingredients — this decade. Battery production lines, which China will continue to dominate, must sustain unprecedented growth to keep pace with demand.

The point when pack prices will drop below $100 per kilowatt hour — a widely cited benchmark around which battery costs are competitive with combustion engines — is now less certain because of significant cost pressures.

“If raw material prices remain elevated or climb further, this could delay the timeline by a couple of years, out from 2024 in most markets,” the analysts write. That said, they don’t expect the rising cost of batteries to derail near-term EV adoption. “Some of the factors that are driving high battery raw material costs — war, inflation, trade friction — are also pushing the price of gasoline and diesel to record highs, which is driving more consumer interest in EVs.”
Bloomberg
Tags: #electric vehicles #EV #net zero
first published: Jun 1, 2022 12:10 pm