Heavy fines and bans have reduced pitch invasions, but as was seen in Sydney with the Adani protests, some activists don’t mind paying the price.

Protesters hold up banners as they interrupt the one day international cricket match between India and Australia at the Sydney Cricket Ground in Sydney, Australia, Friday, Nov. 27, 2020. (AP Photo/Rick Rycroft)

During Australia’s commanding victory over India in the first one-day in Sydney, one man faced a bouncer even though he was not on the field - Gautam Adani.

Two men sprinted on to the ground during play carrying banners against Adani, whose coal mine in Australia has angered activists. They believe the mine pollutes water and air and negatively affects the lives of indigenous people. The posters also opposed the State Bank of India’s rumoured $1 billion loan to Adani.

A major sporting event is a powerful platform to make statements. And over the years people have broken into grounds to make their point. Clothing is optional for this breed, as the many instances of streaking in history prove.

It’s become harder to breach playing areas, however. Security is tight at venues. Corpulent and waddling guards such as the ones in Sydney are rare. Money is a bigger deterrent to interlopers. Pitch invasions attract hefty fines and lengthy bans. The two offenders in Sydney are likely to be fined $5,000 each.

In some places there are jail terms too. But such is the fire of activists sometimes that they still go ahead with their demonstrations. During the 2018 Fifa World Cup final in Moscow, with the intimidating Vladimir Putin and global dignitaries in attendance, four members of the feminist group Pussy Riot ran onto the pitch. The lone man in the quartet, Pyotr Verzilov, hoodwinked a policeman by dressing as one himself. 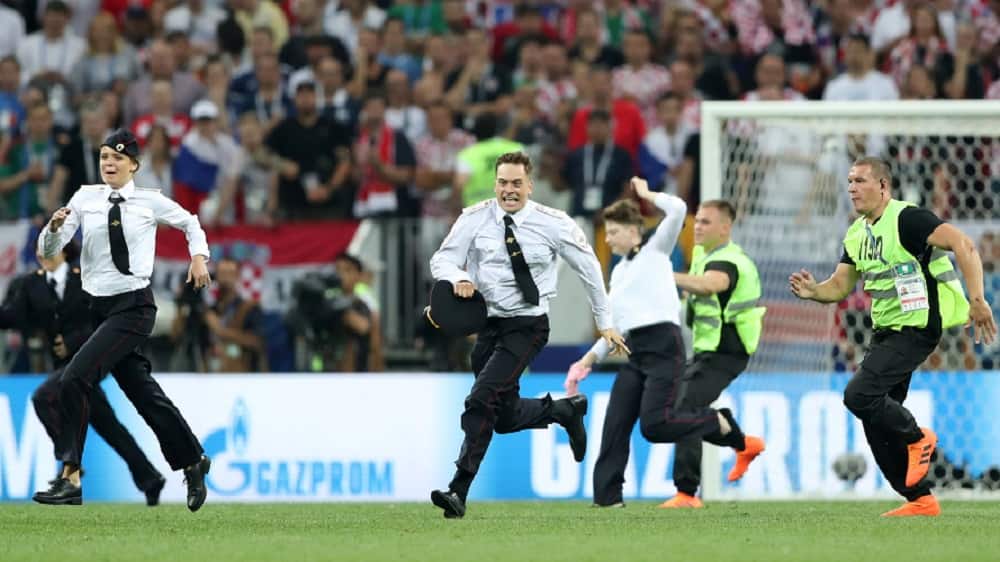 "I know the Russian psychology: a police uniform is sacred. Nobody will ask for your permit or accreditation,” Verzilov said later.

The group’s mission was to draw attention to human rights abuses in Russia. They were handed 15-day prison terms and a three year ban from attending sports events in the country.

Cricket was again the setting when one lady wanted to transmit a certain message to the world. It was the fifth Test of the 2005 Ashes series between England and Australia at The Oval. A female streaker ran onto the ground. Written on her hips were the words GoVeg.com. The incident was perhaps discussed over rump steak later in the evening across London.

Another Ashes, another incident. And this time of a serious nature. It was August 1975, and a man named George Davis was in jail in the UK for alleged armed robbery. However, many people believed it was a case of mistaken identity, and demanded Davis be released. The campaign for his freedom, led by Davis’ wife and supported by celebrities such as Roger Daltrey of the rock band ‘The Who’, became a movement of sorts. Four of Davis’s supporters then destroyed the pitch at Headingley Cricket Ground before the final day of the Third Ashes Test. They dug holes in the wicket and poured oil on it, rendering it unfit for play. The match was declared a draw. Sadly for home fans, the vandalism cost England, trailing 1-0, a chance to get back into the series.

A violent sport, rugby, triggered some of the most violent protests in sports history. In 1971, the South African rugby team visited Australia for a six week tour. Apartheid was very much the way of life in South Africa, making it a controversial and often unwelcome visitor to other nations. Such was the opposition to the tour in Australia that hundreds, sometimes thousands, participated in demonstrations in different parts of the country.

Sydney, where the Adani protest took place, and Queensland, where Adani has his mine, were at the forefront of the rugby episodes as well. Protesters tried to saw through the goalposts at the SCG. In Queensland, a state of emergency was declared.

Despite all the ruckus, the matches took place. But the protests did not go waste. After the rugby, the South African cricket team was due for a visit. Once bitten, Australia called off the series.