Tune in on 17th July for the Small Business Virtual Summit with Cisco. Register now!
you are here: HomeNewsTrendsHealth

In-Depth: Is Herd Immunity our best bet in the fight against coronavirus?

With many countries easing lockdown restrictions, the debate on Herd Immunity has gained traction. What is Herd Immunity and is it achievable, here is all you need to know:

The novel coronavirus has lent a slightly dystopian tinge to the world as we knew it. Some words — unprecedented, extraordinary circumstances, desperate times — have been over-used in the last couple of months, as people were locked down to limit the spread of the highly-contagious virus.

As people struggled to work amid broken supply chains, doctors faced an unparalleled influx of patients and the shutdown battered the economy, scientists went on an overdrive to discover an antidote, a vaccine. Many reports have claimed that the coronavirus vaccine will be the fastest vaccine to be ever developed.

However, limited knowledge about the virus is posing to be the biggest impediment in the ongoing research for a vaccine. Add to it, the capability of coronavirus to mutate into more potent strains.

Time is of utmost essence here – the more it is spent on finding an antidote as potent as the virus, the longer people would have to be confined to their homes.

Taking cognizance of this precarious trade-off, the governments of many countries decided to direct their worries to a more important resource. A cash-strapped economy due to shutdown of business has had policy makers pick their brains. The International Monetary Fund (IMF) in March this year had said the global economy will shrink by 3 percent due to the coronavirus-driven collapse of activity, marking the steepest downturn since the Great Depression of the 1930’s. This means, that the world is likely to lose a cumulative $9 trillion in output over two years – greater than the combined GDP of Germany and Japan.

IMF also slashed growth forecast for the Indian economy, projecting a GDP growth of 1.9 percent in 2020. India Ratings and Research (Ind-Ra) also revised its FY21 GDP growth down to 1.9 percent from its earlier forecast of 3.6 percent published on March 30 this year.

This explains the easing of restrictions, resumption of businesses, lifting the suspension of air travel; and the paradigm shift to “learning to live with the virus”.

After being deserted for almost two months, the streets are already brimming with activity; metro cities are witnessing traffic jams on arterial roads. Although the government has reiterated that social distancing guidelines be heeded strictly, the compliance on ground is loose.

Therefore, it will not be disjointed to talk about the concept of Herd Immunity.

What is herd immunity, why is it being bandied about and how is it linked to easing lockdown restrictions, let’s find out:

Herd Immunity is a benchmark which is achieved when the majority of the population develops resistance to a highly contagious disease, which, in turn, limits the spread of the disease further.

For example, if 80 percent of the population has become immune to the virus, then four out of every five people who encounter someone with the disease, won’t contract it. Hence, they will not be able to spread it, and this will help in controlling the transmission of that particular disease. This is an indirect way of protecting those who are not immune to the disease.

Depending on how infectious a disease is, about 70 to 90 percent of the population needs to develop resistance against a disease in order to achieve Herd Immunity.

How does Herd Immunity work?

When our body contracts an infection, it automatically produces antibodies to fight off that infection. Otherwise, vaccines, which often carry the disease-causing microorganism in a dormant or inactive state, help the body produce those antibodies so as to protect an individual from catching the infection, making him/her immune to it. Besides, if an individual is immune to a disease, he/she cannot pass it on to others.

For instance, a person immune to chicken pox cannot unknowingly transmit it to a person who is not immune to the disease. 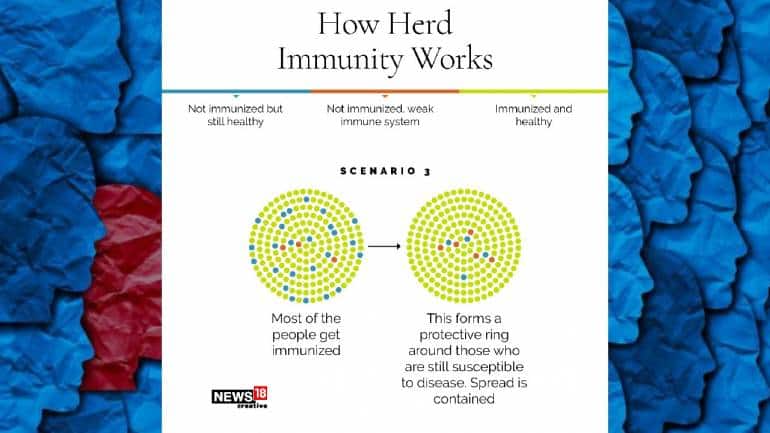 For instance, if there are 100 people in a room, of which 90 are immune to measles, then there is little chance that the remaining 10 will catch the disease. The antibodies of the majority population, built wither via exposure to a sickness or vaccination, protect the remaining vulnerable people.

But, if the number of immune people is reduced to 80, then the chances of the remaining 20 to contract the infection are higher.

Has Herd Immunity been achieved for diseases?

Yes. According to Johns Hopkins Bloomberg School of Public Health measles, mumps, chicken pox and polio are examples of highly contagious diseases that were very common in the US once, but are extremely rare now because large-scale vaccination drives have helped achieve Herd Immunity.

For diseases which don’t have vaccines, even though adults build immunity after getting exposed, children and those with weakened immunities are always at risk.

Besides, many viruses, especially those causing influenza, have a tendency to mutate over time. This means, the antibodies naturally produced by the body can’t fight off the infection for a long time, i.e. the immunity is short-lived.

Is it possible to achieve Herd Immunity against coronavirus?

The threshold for achieving Herd Immunity depends on how infectious a particular disease is. With the information that is available on the novel coronavirus, epidemiologists have estimated that at least 70 percent of the population needs to be immune to achieve that threshold.

Since there is no vaccine available for COVID-19 yet, the only way Herd Immunity can be achieved is if a large proportion of the total population gets infected, which is bound to pose hiccups on many fronts.

Considering that coronavirus is highly contagious, if lockdown restrictions are removed the number might still be achievable. But, COVID-19 is also a lethal disease. Hence a large number of infections will not only overwhelm the hospitals, but also may lead to high death rates. 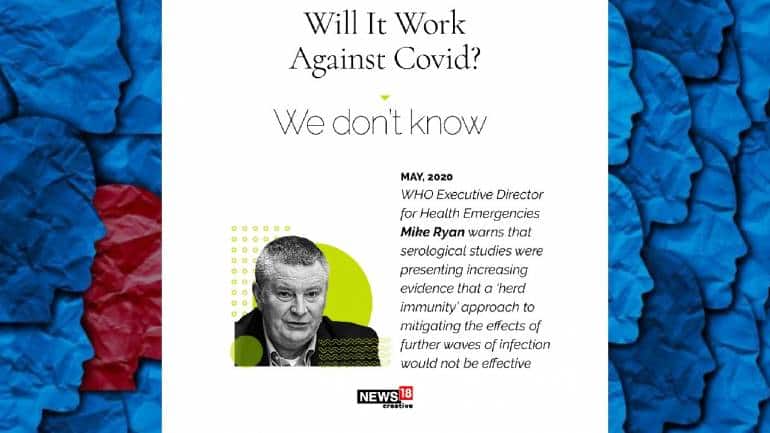 Another problem with coronavirus is to do with asymptomatic people. These people do not develop any symptoms of COVID-19, yet they have the capability of transmitting it. They are not entirely immune, but they are carriers. This peculiar ability of the coronavirus to be transmitted by people not showing any symptoms is a major reason for the pandemic.

The third issue is relapse of the infection. There have been reports of the coronavirus infecting an individual after he/she has already recovered from COVID-19 once. Hence, it is yet not certain if the antibodies developed against coronavirus for the first time are effective in fighting it off the next time. The notion has been emphasized by the World Health Organisation as well. With individual immunity not proven yet, Herd Immunity is shrouded with doubts.

COVID-19, unlike influenza, is a brand-new disease. Before this year, no one in the world had any immunity to it at all. Add to this the ability of the SARS-CoV-2 virus to mutate into more potent strains.

Sweden has largely remained open while most of the countries observed an overall shutdown of business. Opting for the rather controversial approach of keeping restaurants, schools and parks open for public (while banning gatherings of more than 50 people and shutting museums), Sweden’s Chief Epidemiologist Anders Tegnell said that the country is focusing on long-term sustainability over drastic short-term tactics. In fact, Sweden’s ambassador to the United States said last month that the capital of the Nordic country, Stockholm, could reach Herd Immunity in May.

The concept was bandied about in the United Kingdom too, with the British government claiming in March that their strategy will be to allow the virus to pass through a large population so that they acquire Herd Immunity. Later, many clarifications were issued on these claims until recently when the country’s Chief Scientific Advisor Patrick Vallance mentioned it again, only to retract his statement soon after.

While both Sweden and Britain experimented with limited lockdowns in an attempt to achieve Herd Immunity, recent studies indicate that no more than 7 to 17 percent of people have been infected so far. 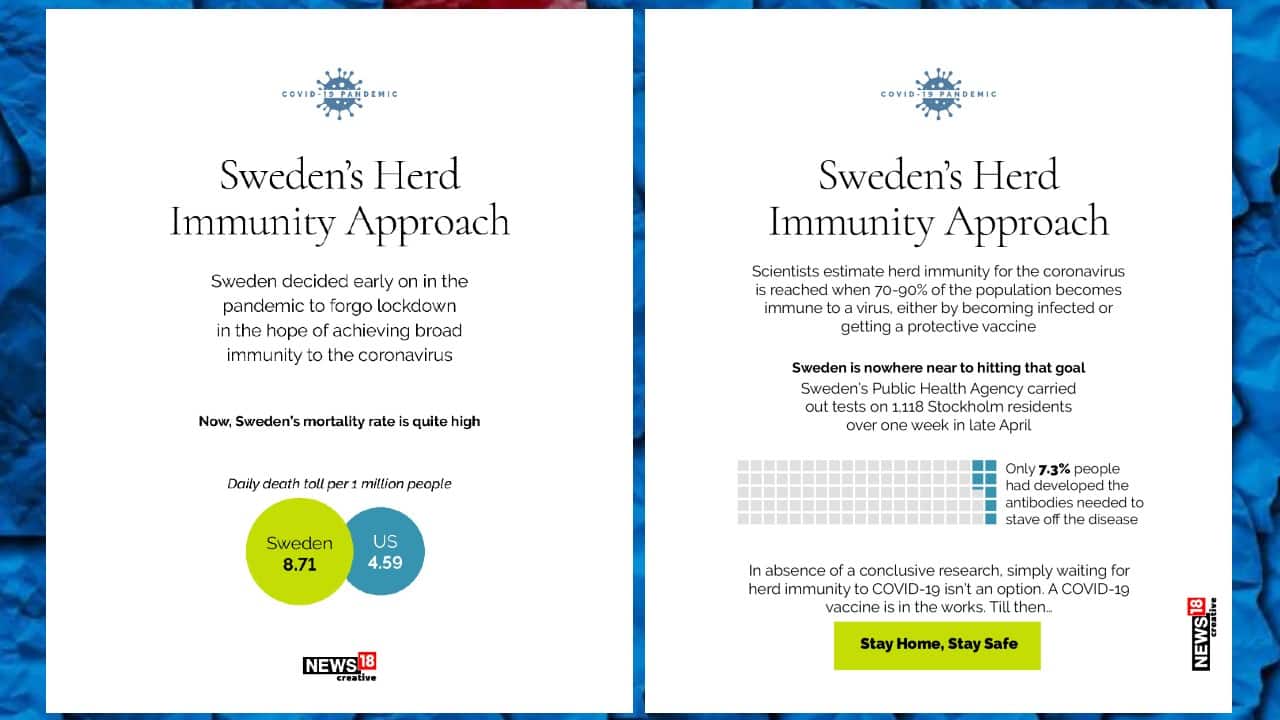 Take the example of New York, one of the worst affected cities. The city has reported over 24,000 cases and nearly 2,255 deaths. Yet, serology surveys (tests done randomly to check for antibodies against COVID-19) have shown only 20 percent of the population having antibodies.

In Wuhan, which was the epicentre of the COVID-19 outbreak and is limping back to normalcy now, nearly 70,000 cases and 4,500 deaths were reported. Yet, serology tests claim only 10 percent have antibodies. This means that the world is still far from achieving Herd Immunity.

Israel, on the other hand, is gearing up for large scale serology tests in order to gauge the proportion of population which has developed antibodies against the novel coronavirus. Israel, whose aggressive response to the coronavirus has held its fatality rate to a fraction of those of the United States and other hard-hit nations, is readying a nationwide serological test of 100,000 citizens. Moshe Bar-Siman-Tov, director-general of Israel’s Health Ministry, said that if antibody tests show a sizable portion of the population has developed antibodies, that could mean Israel is on its way to “herd immunity” and would be well equipped to withstand further outbreaks. Meanwhile, studies have estimated the percentage of Israelis with antibodies range widely, from less than 1% to upward of 10%.

For India, experts have said, banking on Herd Immunity is a “terrible idea”. While speaking to former Congress chief Rahul Gandhi, Director of Harvard Global Health Institute Ashish Jha said, “We are finding that even healthy and young people are getting very ill. We can’t be cavalier about this. We have to protect these people. Herd Immunity in India is a terrible idea as millions will die, even young people.”

Jha said COVID-19 is here to stay for more than a year and asserted that aggressive testing is the only solution that will help India contain the virus, as it will identify the most vulnerable ones in the country.

It is not viable to achieve Herd Immunity against the novel coronavirus. Scientists have advised strongly against deliberate exposure to the infection to gain immunity – a practice popular with chicken pox before the varicella vaccine was developed.

The only feasible way to contain the spread is to strictly follow social distancing guidelines until a vaccine is developed. Experts believe that large scale vaccination will be the best hope to achieve Herd Immunity against COVID-19.

Even as lockdown restrictions are easing, it is valuable to remember that social and physical distancing is the only way to break the chain of transmission and prevent hospitals from being overwhelmed.

Even if the government has eased restrictions in an attempt to rescue the economy, it is the citizens’ responsibility to follow guidelines, maintain physical distancing and respiratory hygiene and wear masks in public places. In short, be atmanirbhar, be safe. 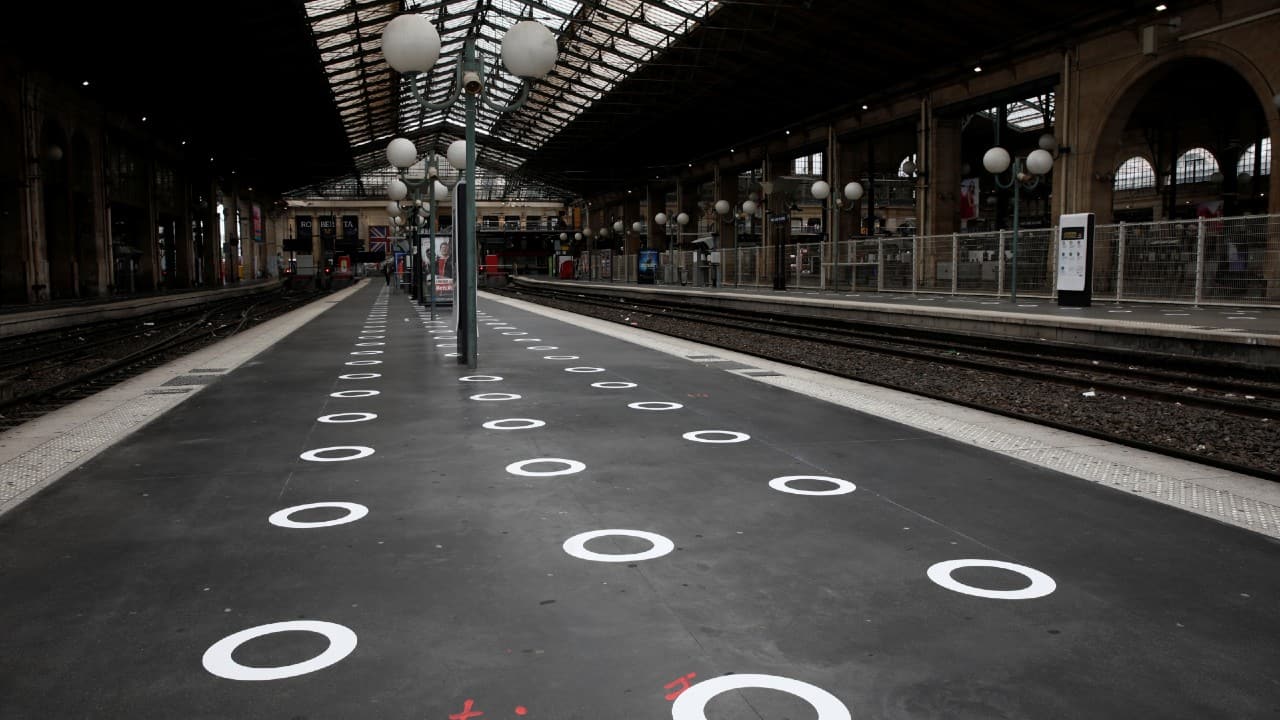 Plastic circles are seen on the ground indicating where to stand to respect social distancing on a platform at the Gare du Nord train station in Paris, France, May 5, 2020. (Image: Reuters)

Chingari in talks to raise $10 million