Tribute | Subhadra Sen Gupta, the writer who made history fun for India’s children

The 2015 Bal Sahitya Puraskar and 2020 Tata Trusts Big Little Book Award winner felt that history books turn people into cardboard characters - and if you flesh them out, children will listen and learn.

Rising death toll from the Covid-19 pandemic has claimed one of India’s most loved children's books writers: Subhadra Sen Gupta (1952-2021). Sen Gupta, who wrote over 60 books, passed away in Delhi on May 3.

The feted author had a knack for teasing out delicious details about historical figures, and using that material to inspire curiosity in her readers. In the book We Call Her Ba (2014), she wrote about Mohandas Karamchand Gandhi getting his first lessons in Satyagraha from his wife Kasturba. The Sahitya Akademi awarded Subhadra Sen Gupta the Bal Sahitya Puraskar in 2015. Her stories have also made it to textbooks published by India’s National Council for Educational Research and Training, and been adapted for a TV series on Doordarshan.

Two of their recent collaborations dipped into Mughal history, foregrounding the narratives of women from the empire – Jodh Bai, the Rajput woman who became Mariam-us-Zamani after marrying Emperor Akbar, and Jahanara, daughter of Emperor Shah Jahan. The Teenage Diary of Jodh Bai (2019) and The Teenage Diary of Jahanara (2019) establish these women as protagonists who made history rather than supporting actors defined only by the men in their lives.

Sen Gupta also worked in advertising for some time, and wrote books for grown-ups. In 2019, Hachette India published Sen Gupta’s book Mahal: Power and Pageantry in the Mughal Harem. She wanted to challenge the idea of the harem as “an exotic sexual playground” by drawing attention to the poets, scholars, diplomats, entrepreneurs and foster mothers who served as royal advisers, ran vast estates and oversaw fleets of trading vessels.

In love with Delhi

Shome Ghosh says, “Subhadra did her MA in history from Indraprastha College. She came from a family of Bengalis living in Old Delhi since the late 19th century. Having grown up around Jama Masjid and Chandni Chowk, she was keen to tell the stories she had gathered through a memoir she was writing for us. I sent her the copy edits two weeks ago.”

The author’s love for Delhi was not restricted to the built heritage of the city. She cared deeply about the people. This is evident from the long and affectionate relationship she developed with The Community Library Project (TCLP) that operates four open-for-all libraries in the city that can be accessed free of cost.

“Many of the children who come to our libraries are from working class backgrounds, speak Hindi, study in government schools, and are often the first ones in their family to attend school or join a library,” says library activist Mridula Koshy. She remembers the deceased author as someone “who would come four-five times a year with two-three bags of books for children, and with an eagerness to listen to them, not just to read her stories and go away.”

Sen Gupta encouraged TCLP to start more libraries, was one of their major individual donors, and also took the children for picnics and history walks.

Her Feluda series of graphic novels, created in partnership with illustrator Tapas Guha, is a big hit among the children at TCLP. It is based on detective fiction originally written by filmmaker Satyajit Ray, and is published by Puffin. She also wrote spooky stories, mythological tales, coffee table books, and adventure stories. She worked with Zubaan, Niyogi, Katha, HarperCollins India, and many other publishers.

Taksale cites the book Sailing Home (2005) as an example. It revolves around a brother-sister duo living in the port town of Mamallapuram during the Pallava period, searching for their father – a sailor who has not returned from his voyage.

Illustration in a book by Subhadra Sen Gupta (via Wikimedia Commons).

Pratham Books has also published Subhadra Sen Gupta’s book Freedom Run (2014), a comic book that tells the story of children in Uttar Pradesh’s Mirzapur and Bhadohi districts who are engaged in labour-intensive work at the looms to make carpets with intricate designs.

Sohini Mitra, who heads the children’s and young adult list at Penguin Random House India, was a close friend of the author, and also her editor of over 13 years. She says, “Subhadra’s narrative was always refreshingly readable, free flowing without the trappings of complicated jargon.” She recalls that the author, lovingly known as ‘Subz’, knew how to fire her readers’ imagination. She took their feedback seriously. 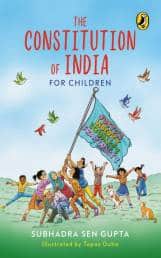 They worked on several books together; one that is particularly close to Mitra’s heart is The Constitution of India for Children (2020). The book was released on India’s Republic Day – January 26, 2020, “amidst the anti CAA (Citizenship Amendment Act) protests, at a time when we needed a solid, sound voice and needed to look back into the tenets of our Constitution and what it stands for.”

On this occasion, she said, “Our textbooks turn history into dry facts where children are introduced to cardboard characters. I turn them into people. Ashoka was a man from Patna who chewed paan. Akbar had a limp and loved mangoes. Bapu hated his false teeth. Once you have grabbed their attention, children will listen and learn. They love history, they hate the textbooks that are written in a deadly dull manner.”

Her books were translated into many Indian and European languages. She liked to browse through these translations even though she could not read them. While turning the pages, she thought of children reading and laughing at her jokes in Telugu or Assamese – which she had conceived in English. Being able to connect with them was a tremendous source of joy.