To learn how the mines auction 2020 unfolds, be a part of SteelMint Events’ 4th Indian Iron ore, Pellet and DRI Summit

In line with MMDR (Amendment) Act 2015, Odisha govt. put up 20 merchant iron ore mines for auction which were due to expire in March 2020. Upon receiving aggressive participation from 86 companies, Odisha govt. has successfully auctioned 17 mines, out of which 5 were reserved for captive and remaining 12 for merchant use. The leases put up for auction are expected to produce around 65-70 MnT iron ore in FY20 versus 50-55 MnT in FY19, against an EC limit of 80-85 MnT. Auction process of RP Sao Guali mines is underway. However auction process of Badampahar has been put on hold due to some ongoing legal issues.

1. Supreme Court holds transfer of  Essel Jilling Mines till Further Order - Supreme Court has put a hold on transfer of Essel‘s Jilling iron ore mines auctioned under MMDR act, amid a writ petition filed by Essel Mining Industries Ltd, a subsidiary company of Aditya Birla. The operations were suspended in 2014 following SC order owing to lack of requisite clearances. In the recent writ petition put up, the miner said that it could not continue mining operations for 39 months despite having all statutory clearances and for reasons beyond its control. Hence the miner has now requested for extension of the mining lease period on account of time lost in litigation. The case will be heard in third week of March.

Jilling Langalota mines received aggressive participation from bidders. Outstripping other bidders, Shyam Ore emerged as preferred bidder for the mine quoting a premium of 135%, as per sources.

2. Ministry invites suggestions on Draft rules - The Ministry of Mines has invited comments/suggestions on draft Minerals (Other than Atomic and Hydro Carbons Energy Minerals) Concession AmendmentRules, 2020 and draft Mineral (Auction) Amendment Rules, 2020. The Ministry has invited suggestions from the general public, Government of States and Union Territories, mining industry, stake holders, industry associations, and other persons and entities concerned. The key highlights of the draft are as follows:

i) The new lessee shall immediately, but not later than ninety days from the date of issue of the Letter of Intent, apply for all necessary rights, approvals, clearances, licenses and the like under the applicable statutes/rules/regulations afresh for obtaining the necessary clearances to enable further continuance of the mining operations beyond two years, as per the proviso to sub-section (2) of section 8B of the Act.

3. Recap of auction results – Out of 17 mines auctioned, JSW Steel won four mines, ArcelorMittal and Fomento bagged one mine each. Few merchant miners like Serajuddin, KN Ram and Ghanshyam Mishra were able to retain their mines. Auctions witnessed high premium upto 154% over reserve price.  The premium is the key ﬁgure to evaluate the bids. It’s a percentage of the price of the iron ore that is set by the Indian Bureau of Mines (IBM) each month for different states and grades. The high premiums are set to put iron ore prices on a diﬀerent orbit altogether. Since many of the large companies are emerging as the winners, they will become the new price makers in the market.

JSW Steel has won two mines which were reserved for merchant namely Nuagaon & Jajang having total EC limit of 22.1 MnT pa. Govt has emphasized in Mineral Law (Amendment) Ordinance 2020 that a successful bidder after obtaining all statutory clearances needs to produce in the first two years at least 80% of what the mine actually produced in the preceding two years. 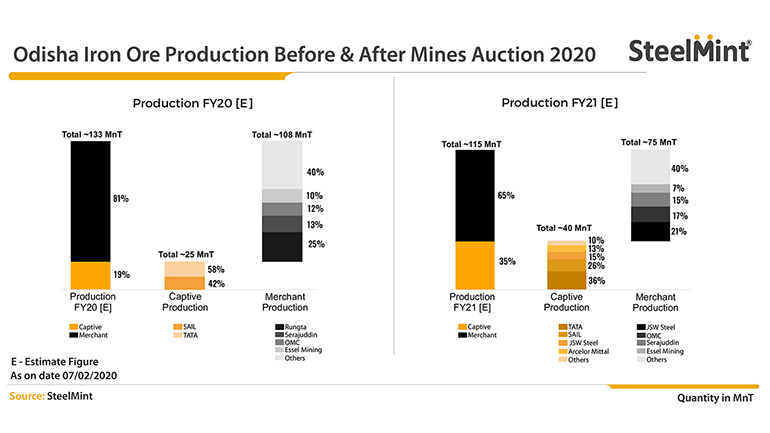 It would be interesting to see how high premium fetched in recent auctions change market dynamics and prices in near term. To learn how the mines auction 2020 unfolds, be a part of SteelMint Events’ 4th Indian Iron ore, Pellet and DRI Summit which is scheduled on 2-3 March 2020, in Hotel LaLiT, New Delhi.